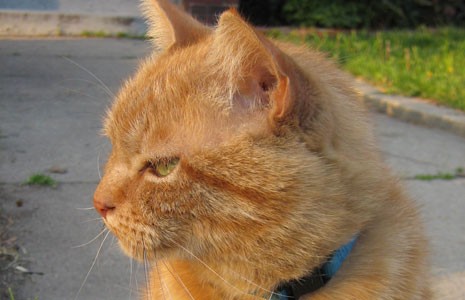 In 2002 Mookie became famous for stubbornly returning to his old neighborhood in the Museum District after his owners moved away. At least a dozen times, he trotted away from his new house off Cary Street Road, traveling about two miles along busy roads and over the expressway to get to Grove and Belmont avenues. His owners had to go retrieve him.

About two years ago Mookie adopted Brooks Godwin and Dave Olli, who live at Belmont and Floyd avenues. “He just kind of decided to live with us,” Godwin says. (The cat’s former owners moved back to the neighborhood, Godwin says, but they now own two large dogs that Mookie didn’t care for.)

Mookie likes to sit on the stoop and receive visitors. He found a sidekick: a little, orange-and-white feral tabby nicknamed Mookie Junior, who follows his namesake around worshipfully.

But on Friday, Aug. 26, Mookie went out collarless (he’d taken it off himself) and vanished. “And that’s not like him,” Godwin says.

Mookie is 18 years old. He’s orange and white, weighs about 12 pounds and was last seen on Belmont between Floyd and Grove. He has a sore on his hindquarters that’s being treated by a vet. Godwin’s afraid someone may have found him and assumed he was a stray that needed medical attention.

“I am desperately looking for him,” Godwin says. She knows he’s old, but aside from the sore the cat’s doing fine. She wants to know what happened to him, even if he decided it was time to go for good. “It would be his style to throw his collar off and walk out into the unknown,” she says.

The far-ranging tabby was hanging out in an alley near Floyd Avenue when he was “very innocently abducted,” says owner Brooks Godwin, by a Kensington Avenue resident who was out walking her dog.

The good Samaritan thought Mookie, who has sores on his back, was an injured stray. So she scooped him up and took him home. She even took him to the vet. Then, when she saw the lost-cat flyers plastered all over the Museum District, she called and brought him back.

Godwin’s grateful. “Mookie was the perfect guest,” Godwin reports. “Very polite and very gracious.” Now his collar is once again around his neck. He’s been making the rounds -- supervised -- of the neighbors who were worried about him. “He knows more people in Richmond than we do,” Godwin says.