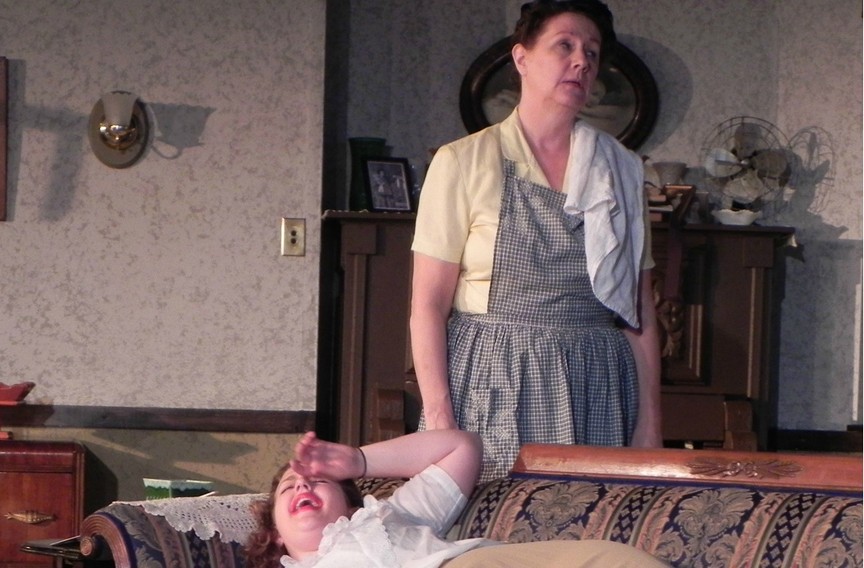 A grab bag of stories intersects in "Home Fires," the bittersweet, often-funny World War II-era drama currently playing at Chamberlayne Actors Theatre. While the interplay of these plots often seems random, the play is peppered with enough interesting characters and emotional payoffs to make it worth checking out.

The production has the benefit of a particularly strong lead performance by Rebekah Spence. The veteran actress plays a stalwart single mom, Nettie Morris, who opens her house to female boarders to make ends meet during the war, causing mixed reactions among her three teenage children.

Her son, Sonny (Charles Belt), who has been avoiding the draft due to a fear-induced illness, is roused from his torpor by the attentions of ambitious newcomer, Maggie (Emily Turner). Elder daughter Susanna (Heather Yarbrough) uses the intrusions of boarders into her life as fodder for numerous shrieking tirades. And youngest child Nola (Kate Vehrs) simply makes do, finding a surprising friend in Maydene (Miranda Webster), the persnickety boarder others deride as a busybody.

Jack Heifner's script spends too much time on the least-original characters (Sonny and Maggie) and never fully integrates an intriguing subplot involving a lesbian couple, June and Alice (played by Amy Berlin and Ashlyn Landrum), into the main action. Still, the conflicts that evolve between Nettie and Sonny crackle with intensity, with Spence and Belt projecting an authentic love-hate chemistry.

Spence provides the foundation for this production, but she has able assistance. Turner smolders nicely as a demure at first but ultimately saucy temptress. In her portrayal of Nola, Vehrs makes a thoroughly believable transition from adolescent to young woman when the setting of the play jumps from the middle of the war to five years later. While Yarbrough's outbursts ultimately become grating, Berlin fully inhabits her character in a turn both amusing and heartfelt.

"Home Fires" will run at Chamberlayne Actors Theatre, 319 N. Wilkinson Road, through Nov. 6. Call 262-9760 or go to cattheatre.com for tickets and information.