Where the Tinsel Ends

Christmas shopping on Broad Street: You're not in Short Pump anymore. 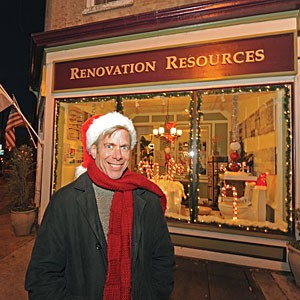 Every December, Richmond reaches deep into its shoe box of nostalgia and dusts off the beloved ornaments: tacky lights, dancing mice, Snow Bear, even tea with Legendary Santa.

Longtime merchants remember when there were Christmas decorations in every window. Crowds flocked to G. C. Murphy, to Woolworth's, to the toy department in the basement of Standard Drug — and, of course, to retail giants Thalhimers and Miller & Rhoads.

But heck, I'm going to try it anyway. My mission: to hit Broad Street on Thursday morning to find a Christmas gift for a girlfriend who lives in New York City.

Over by CenterStage and the site of the recently announced skating rink, Broad looks festive; red bows and tinsel cover the light posts. But the holiday decorators gave up at Second Street. There, where the tinsel stops, I start walking west.

The first store I enter is Friedman's Loan Office, a pawn shop that's been a Richmond institution since the late 1930s. Seasonal sales have been slow this year, says Robert P. Blaylock Jr., Friedman's manager. He's seen a few new customers coming in to pawn or sell things, but not many shoppers.

There are a few gift possibilities at Friedman's: iPods, netbooks, musical instruments. Some young guitar hero would swoon to find the gleaming wood-grain Warrior electric under the tree. It's $1,295 with case; Blaylock says it would sell for $3,000 new. Still a little out of my price range.

Just west on Broad is Style Plus, a clothing and accessories store that's been here for 15 years. No Christmas shoppers here either.

“Same thing all the time,” owner Si Young Oh says: slow business. “People don't have money. They cannot spend.” I browse the Steelers caps, the artificial flower arrangements, the ladies' hat-and-glove sets. Not quite what I'm looking for.

I come to another venerable Richmond pawn shop, Jefferson Loan Office. The windows are bedecked with red bows. Gift options include a preowned Wii and a PlayStation 3, gold chains and bracelets, even a Rolex watch in a velvety green box.

Jefferson was founded in the 1880s by the great-great-aunt and two great-uncles of Louis Adams, who opened the pawn shop in its current location in 1993 — a year after Thalhimers closed its doors, and three years after Miller & Rhoads.

Although the economy halted most redevelopment efforts, things may be picking up, Adams says: “People are starting to talk about Broad Street again.”

It'll never be the major retail corridor it was, he says, but Adams predicts that more art galleries and specialty stores will fill in the vacant storefronts within five to 10 years. He points to the recent sprouting of restaurants: Tarrant's, Popkin Tavern, Bistro 27 and Comfort. Merchants also praise the First Fridays Art Walk for bringing people back downtown, but say there's not much spillover traffic to retailers.

I keep walking west, to Renovation Resources at Broad and Adams streets. The four-year-old shop, which specializes in high-end bathroom and kitchen fixtures, is an unlikely place to buy a gift — unless you're looking for an electric towel warmer.

But owner Kevin W. Korda shows me “the world's best $7 stocking stuffer”: a pack of four Skoy cloths, which are thick, biodegradable, brightly colored cloths for wiping up messes. Each one replaces 15 rolls of paper towels, the packaging proclaims. They're cute. And European. I take two.

On the next block I pass Turnstyle, a music and clothing store that's still dark (it opens at noon) and push open the door of Kindred Spirit, a cozy boutique that sells jewelry, scarves, soaps and oils. Fragrant smoke uncurls in the sunlight while owner Asya Madyun scoops out some Tibetan orchid incense for a customer.

Not much of a holiday rush here either, Madyun says. Thousands of revelers came to Broad Street for the Christmas parade on Dec. 4, but few stayed to shop. “Richmond seems so dead sometimes,” she says. “Why? We're not Petersburg.”

Still, the year-and-a-half-old shop does a steady business, and I find the perfect little gift for my friend, who is the spiritual sort: small packets of homemade incense in different scents. One, Ade'Kule, is supposed to bring “double joy in da house.” That's what the holidays are all about, right?

Madyun even throws in a free sample of frankincense and myrrh.

What would help bring Christmas shoppers back to Broad Street? Here's what some retailers say:

ƒ?› “If there were a real retail anchor downtown,” says Robert P. Blaylock Jr., manager of Friedman's Loan Office. Retailers were optimistic when the convention center was built, he says, but soon realized nothing was being done to encourage retail development in the surrounding blocks.

ƒ?› Decorating. “I think store windows are really important,” says Kevin W. Korda, owner of Renovation Resources. When he ran a business in Miami, he says, retail neighborhoods competed to outdo each other with holiday decorations. He's doing his part, with candy canes in the window of Renovation Resources and a giant illuminated peace sign hanging above the door.

ƒ?› A more visible police presence, merchants say. They describe people lingering on corners, panhandling and selling drugs. “That might have happened around the corner,” Blaylock says, “but that didn't happen on Broad Street 20 years ago.”