Where the Sidewalk Ends

It's up to the U.S. Supreme Court to say who has the right to be in Richmond's public-housing projects. 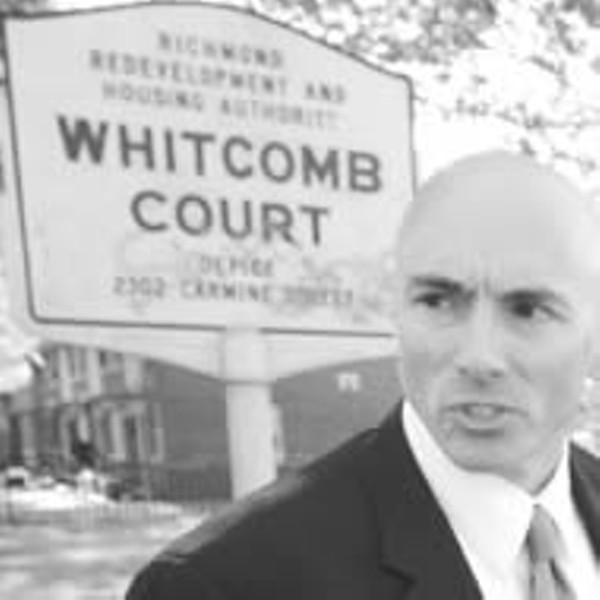 Although RRHA's trespass policy is on the line, this doesn't guarantee its administrators entry to the day's proceedings. Among those vying for a place inside are high-ranking government officials, members of special-interest groups, legal scholars and the news media.

It's the first Supreme Court case for many of the lawyers involved. What's more, one way or another, the highly anticipated case will set precedent. It will be remembered not because it was argued on the last day before the court recessed for summer, but because it ultimately will determine who has the right to sidewalks and streets in public-housing complexes.

In June 1997, the city of Richmond deeded to RRHA the streets and sidewalks in and adjacent to Whitcomb Court, a public-housing complex in the East End. The aim of the conveyance was to privatize Whitcomb Court's interior streets and sidewalks to make them off-limits to outsiders. City Council passed an ordinance recognizing the change in status. RRHA, in turn, gave Richmond Police officers the authority to enforce strict trespass laws, arresting then barring individuals "without legitimate business or social purpose" who persisted in staying in or returning to Whitcomb Court. Similar ordinances were passed privatizing streets and sidewalks in other public-housing complexes like Creighton and Mosby courts. Ostensibly, the new ordinance was aimed at deterring crime, especially drug-related crime, that plagued and continues to plague many of Richmond's low-income, distressed neighborhoods.

But in January 1999, the ordinance was tested.

Kevin Lamont Hicks, a nonresident, was charged with trespassing in Whitcomb Court after a police officer who knew he had been banned from the complex by the housing manager saw him on the premises. Hicks had been convicted of trespassing there twice before and had been convicted also of damaging property. Hicks, whose mother and two children live at Whitcomb Court, claims to have been taking diapers to the mother of one of his children.

Hicks was convicted of trespassing in Richmond General District Court. He appealed to the Circuit Court of the city of Richmond where he received a new trial. (He had moved to dismiss the charge, arguing that the closing of streets and sidewalks to the public violated both the Virginia and United States constitutions. The motion to dismiss was denied.) Hicks was convicted of trespass, a misdemeanor, and sentenced to 12 months in jail and ordered to pay a $1,000 fine. Although this sentence was suspended, Hicks still served 12 months in jail because the new conviction was a violation of probation for his previous charges.

Hicks appealed his case to the Virginia Court of Appeals where he claimed that RRHA's policy was overly broad and vague because it gave the housing manager and police too much authority to determine how and when the trespass policy would be applied and enforced. Additionally, he asserted it violated his First and Fourteenth amendment rights to freedom of speech and assemblage.

A panel of judges for the appellate court rejected Hick's claims. But a rehearing of the full 11-member court voted 6-5 to reverse the ruling and held that RRHA's barment-trespass policy violated those amendments.

In June 2002, the Supreme Court of Virginia upheld the lower court's ruling but on different grounds. It ruled that the policy was simply "overly broad."

Subsequently, the Office of the Attorney General of Virginia, on behalf of the commonwealth, petitioned the U.S. Supreme Court to hear the case. The high court obliged. (Out of the nearly 10,000 requests the Supreme Court receives annually to hear cases, only a select few end up on its docket.)

After oral arguments are heard Wednesday, April 30, the Supreme Court will make a decision in the case. It could come as early as June or as late as October.

Through his attorney, Steve Benjamin, Hicks declined to be interviewed for this article.

Benjamin, a Richmond defense attorney with the firm Benjamin & DesPortes, has represented Hicks pro bono as the case has progressed through the years. He insists that Hicks' case is a fundamental defense of the right to use streets and sidewalks, to engage in free speech without censorship and to associate with family.

"The case is important nationally because of the increased use of anti-trespassing measures in public-housing communities that go to the length — as in Richmond — of trying to bar the public from even the streets and sidewalks," Benjamin says. "The trespass policy criminalizes a substantial amount of lawful conduct."

"It's so hopelessly vague," he says, "no one knows from one moment to the next who is authorized to be there and who isn't. It doesn't work the way they say it does."

The commonwealth will argue that this is not the point. Instead, it will say that Hicks has no standing to challenge the law because he wasn't engaged in expressive conduct relative to the trespass policy.

George Martin and Billy Baxter, attorneys for McGuireWoods, the firm that represents RRHA, decline to comment on record for this article. But a summary they prepared states: "This case presents issues concerning public safety and law enforcement in public housing that are of paramount importance to RRHA's ability to maintain a safe environment for families living in Whitcomb Court."

RRHA Executive Director Tyrone Curtis says a decision in favor of the commonwealth — and therefore RRHA — is crucial. "The trespass policy is a tool that we have used that we feel has been effective," Curtis says. "Hopefully it has served as a deterrent to crime. Before, drug dealers knew the streets were public. They knew if they stood on the streets or sidewalks, the police couldn't do anything without evidence. This tool helps us have the right to say: Move on."

RRHA's Curtis says the housing authority received abundant support from the residents of the apartment complex. Benjamin says the trespass policy and the way it's applied — outsiders or guests are stopped by police and asked for identification and the purpose of their visit — makes them feel like second-class citizens.

A former resident of Whitcomb Court who visits regularly agrees.

"Every day I get stopped," says a 20-year-old man who calls himself Demetrius. Police have barred him from the project, he says. He has two charges: one for trespass, one for something he won't explain.

"The law ain't right," says his friend Tonya, 20, who lives in Whitcomb Court, pays rent on her own and insists she has the right to hang out with whomever she wants on the sidewalks near her apartment. But hers is Whitcomb Street, a thoroughfare. It is not a "private" one, she notes, so she doesn't have to worry.

It is almost lunchtime on a recent weekday afternoon. The streets and sidewalks along Whitcomb Court's plain brick apartments are all but empty. Except for Demetrius and Tonya chattering about their first jobs, it's eerily quiet.

"I better move before the police see me," Demetrius says. "If I don't they'll be harassing me all day." S