Where the Dream Lives

Arthur Burton’s family has owned the plot of land off of Jefferson Davis Highway for more than a century. It’s smaller now than it was 124 years ago — just 2 acres of garden beds trickling off into dense woods. Cars roar by during rush hour and half a mile down the road a barbecue joint is filling up with early evening diners.

Food access – or lack thereof – has long been an issue for both rural and urban dwellers who live in these communities, oft forsaken or purposefully segregated from the more affluent parts of a city.

But in the past few months, food justice has been a trending topic, with alleged advocates and allies tossing the phrase around like a hot potato. Between the pandemic bringing to light holes in our nation’s food systems and current racial unrest setting said gaps ablaze, do-gooders have latched onto the idea of exposing deeply rooted food inequities across the country.

But how does one turn performative allyship into tangible action? How can people turn “for you” into “with you”?

“You know, OK that’s great,” says alliance member Steven Casanova about the current energy he’s seeing from folks around the city. “But we’ve been talking about this for generations. You want to listen now? OK, let’s plan for future generations.”

A large part of that planning is policy – on Wednesday, the Virginia Food Access Investment Program and Fund goes into effect. The law was sponsored by Del. Delores McQuinn and Sen. Jennifer McClellan, who held a virtual town hall with a number of professional panelists and an appearance by Gov. Ralph Northam on June 25.

It’s worth noting – no farmers were on the panel.

The measure will provide funding “for the construction, rehabilitation, equipment upgrades, or expansion of grocery stores, small food retailers, and innovative food retail projects, [defined in the law], in underserved communities.” The starting budget is $1.25 million.

“When I was on City Council, I had no idea how prevalent hunger was in Virginia,” McQuinn said during her virtual town hall introduction. “I had no idea until a young person knocked on my door asking for food for his family. … Why in the richest country in the world are there still hungry people?”

The panelists specifically highlighted some of their ideas for just how this $1.25 million will be spent, though it’s noted that the design guidelines are “still being developed.” Highlights include expanding retailers that accept food assistance and supporting innovative food models like community-based grocery stores located in food deserts and mobile food sales.

Chelsi Bennett, the American Heart Association of Virginia government relations director and a panelist, noted that this measure is a historic first step – years, perhaps centuries, of more work needs to be done.

“The conversations have changed,” says panelist Jewel Bronaugh, the commissioner of the Virginia Department of Agriculture and Consumer Services. “In 2012 we were educating people about food access, now we’re talking about food access as justice and social reform.”

As lawyer Bryan Stevenson says, the opposite of poverty isn’t wealth – it’s justice. Money is great, but if it lands in the wrong hands, it’s moot. That’s why the Richmond Food Justice Alliance urges well-meaning denizens to dig in, to look at where their skills are most helpful and applicable.

“We keep having more food banks and yes that’s great,” Lynn says. “But it’s like gatekeeping, in a way. Like teaching a man to fish — if I have this tool, this knowledge, this land producing all this fruit, and I just shell some out here and there that’s an immediate solution. But showing someone how to grow their own food, showing someone it’s possible, two years down the road a mom in a pinch can say ‘Oh I can use that land out back because someone showed me how to garden.’”

That entrepreneurial spirit isn’t free, though – you need a teacher, and you need land. Burgeoning agri-enthusiasts in Black communities aren’t forgoing farming careers by choice. The stern reality is that Black land ownership has always been compromised.

“It’s a difficult situation,” says author, educator and longtime civil rights activist Ira Wallace who currently resides in an egalitarian community in central Virginia. “Black land loss – I think of it in some ways as one of the more obvious and ignored underpinnings of continued generational losses. Black people have been separated in many cases two to three generations from their farming roots.”

In her book, “Rooted in the Earth, Reclaiming the African Environmental Heritage,” author Dianne D. Glave explores the complicated relationship between Black bodies and the environment. When Africans were stolen from their homes and forced to labor on American soil, they brought their own knowledge of agriculture and farming techniques with them. They soon possessed more understanding of their environment than their white counterparts, with no claim to that same land.

Once slavery was abolished, the Freedmen’s Bureau supervised sharecropping contracts between former enslaved people and slaveholders. This was an ill-fated collaboration, of course; Glave writes, “Southern whites loosely interpreted the contracts leaving the Bureau powerless and fleecing the freedmen.”

Like Burton, Carter’s family has owned its land for more than a century. Though he vowed he would not work in ag, here he is, planting vegetables while we chat. He started Carter Family Farms in 2017, specializing in organic “specialty ethnic vegetables and herbs mostly from East and West Africa, and the Caribbean.”

It’s safe to say that Carter, who studied agricultural methods in Africa for five years, knows a bit about the industry. But he was not invited to be a panelist for the virtual town hall. “There are lots of advocates,” Carter says. “Not a lot of farmers. And we don’t need advocates – we need customers.” 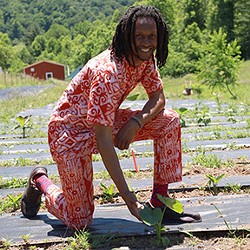 Carter’s friend and fellow farmer Duron Chavis was also not invited to be a panelist, though he participated in the town hall via Zoom questions and suggestions.

“We need more talk about resilient food systems, production, distribution, consumption, processing, waste management in order to eliminate lack of access to healthy food and without access to land for small farmers especially black farmers we will continue to do this hamster wheel of access versus addressing racial justice,” Chavis wrote.

Chavis has long been a Richmond pillar of agricultural knowledge and know-how. His organization Happily Natural Day recently received nonprofit status – he’s started an online fundraiser for it, with a goal of $150,000 to get it fully funded for a year. He’s raised more than $47,000 in just over a week.

“The folks I’m training, the goal is for them to be able to access land through their farming and gardening efforts,” Chavis says. He’s contacting area churches to see if they have any land available, and he’s partnered with Farm to Family’s Mark Lilly to use his ¾ of an acre to turn into a productive farm.

Chavis also builds and delivers resiliency gardens to underserved communities – his group has built 200 raised beds and counting in the last couple of months. He’s working with Richmond parks and recreation to change policies around urban agriculture so community gardens can sell produce where they grow.

Like the Richmond Food Justice Alliance, Chavis hopes that policymakers will defer to the on-the-ground experts as we move forward, harnessing the country’s current energy and good intentions.

“We need holistic approaches that include farmers,” Chavis says. “When people talk about food access, for some reason they don’t include farmers. The way COVID hit … the folks who were able to respond nimbly and adapt quickly were small farmers. CSA programs popped up overnight. It’s indicative of how pivotal small farmers are.”