When heat strikes, don’t be dour. Grab a sour.

Richmond's unforgiving heat made an early entree this year.

While the withering humidity is a perennial complaint, it pairs well with sour beers, a style with growing popularity even among nonbeer enthusiasts. Many brewers have developed sour programs in recent years.

"I think what attracts most people to sours is the natural sweetness and sourness that comes from the brewing process," says Mike Hiller, head brewer at Strangeways Brewing Co., which carries a handful of sours year-round. "The brewing process usually results in a beer that's lighter in alcohol and lighter in flavor. It's a refreshing style in warmer weather."

Most beer geeks trace the origins back to Germany. American brew historians also point out that all beers had some degree of sourness through the mid-19th century, when advances in refrigeration and fermentation technologies began to mitigate the effects of poorer sanitation and naturally occurring bacteria.

It's always been a type of beer he's enjoyed, Hiller says.

"When I first encountered sours, I immediately wanted to know how they did this," he says. He studied how to brew sours and fell in love with the style while learning from a colleague a few years back.

Two main methods can produce the style of beer that elicits flavor profiles with descriptions ranging from liquid Jolly Rancher to lemonade's love child with beer.

Kettle aging is the most efficient — it can take as few as 24 hours after adding fresh wort and Lactobacillus, one of three bacterial strains commonly used to sour a beer. The bacteria goes to town breaking down and consuming sugars, and lactic acid, the byproduct of this feast, is what creates that magic taste. After souring, boil the wort, add hops and move to fermenting.

Barrel aging calls for more patience. It requires several weeks or more after putting finished beer into barrels with bacterial agents. Aficionados say time makes all the difference. Barrel-aged brews have a cleaner, sharper flavor profile after the Lactobacillus spends extended time at the all-you-can-eat buffet of beer sugar.

Sours return drinkers to a wilder time where anything gose — apologies to Cole Porter. One brewer's contaminant is another's complex flavor profile once you invite lactic-acid producing bacteria and yeasts to the party. The permutations are endless and, to some extent, under the control of the brewer. While the craft beer market may be nearing full saturation — or maturity, as economists might impishly say — Richmond's sour offerings are just beginning to ferment.

Earlier this spring, the Veil Brewing Co. announced plans for a South Side tasting outpost on Forest Hill Avenue that will focus on sours, and it continues to release new and fresh batches of beers in this style that never fail to disappoint beer aficionados.

More breweries have added or enhanced their sour programs in the last few years, which has widened the landscape of what's available.

And that's something to pucker your face about. 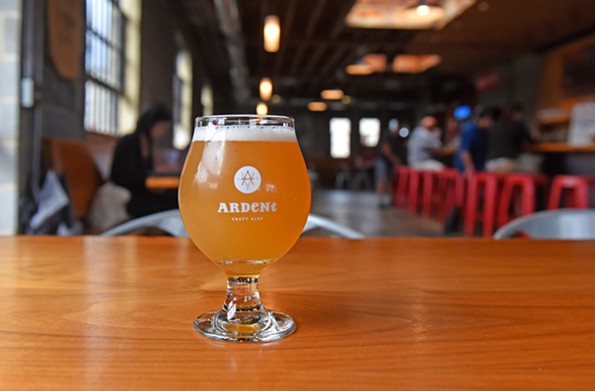 Let's Get It Tarted in Here

Looking for a list of sour programs and beers not to miss in Richmond? Most breweries offer at least one option, but here are a few we recommend:

You can sample Ardent's kettle-aged Berliner Weisse in the taproom, but keep an eye out for its collaborations and other sour releases. In a room affectionately called the Donkey Barn, brewers barrel age seasonal sour releases from nine months to more than a year. Soon the team plans to release a fruited gose, and in June you can anticipate the next seasonal barrel-aged sour. Like most breweries, sours are a fraction of production, but Ardent's program punches above its weight and has yielded some impressive brews.

The Überlin Berliner Weisse is available year-round. It's sharply tart beneath a dry funkiness, according to the brewer. This beer channels a German sour that Napoleon's troops nicknamed the Champagne of the North. Given where Strangeways sits in our fair city, the name holds up after all these years. It can be enjoyed by itself or with the addition of traditional German flavor syrups like himbeersirup (raspberry) or Waldmeistersirup (sweet woodruff made from wild baby's breath). There's also the Wake Me Up Before You Gose and Rot in Hell, a barrel-aged pumpkin sour, and a plum sour is on its way.

Be on the lookout for releases from the Waxing Poetic series. Triple Crossing's twist on the Berliner Weisse is tart, crisp, light and full-bodied with no bitterness. Depending on the release, you can find it after being packed with passion fruit. Right now, bottles of the pink guava and mango release are available both downtown and in Fulton.

Several great options currently tapped include the guava gose (tropical, salty and sour) the hibiscus gose (funky, with hints of cranberry, cherry, and freshly-cut flowers), and the dark cherry sour, conditioned with morello sour cherries (aggressively tart with bold tangerine, strawberry and cherry flavors that meld with understated notes of chocolate, toffee and toast) that lead to a smooth, dry finish. Worth noting: Väsen recently began offering growlers in the taproom so you can gose wherever you want to … preferably outdoors.