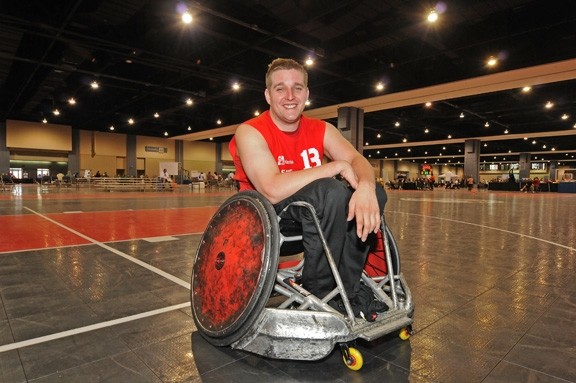 It’s not hard to see why some call it “murderball.” Quad rugby, a full-contact sport played by quadriplegic athletes in Mad Max-style wheelchairs, is one of the highlights of the National Veterans Wheelchair Games. The annual competition returned to Richmond this week, 32 years after it was founded here.

Ryan Lindstrom, 28, was in the Navy and attending technical school when he was partially paralyzed in a car crash. He has played quad rugby for 10 years, and usually plays with the Tampa Generals. His three teammates, called pickers, block the opposing team while Lindstrom strives to score. Lindstrom’s team won a game Wednesday; the gold-medal match takes place 3 p.m. Saturday at the Greater Richmond Convention Center.

Style: Tell me about your gear, because that’s pretty hardcore.

Lindstrom: This chair is an offensive chair. It’s made for the full contact of the sport. All the contact’s made with the chair -- that’s why it’s all banged up. This chair’s actually only a season old. I play a lot.

This chair, set up the way it is, is about $6,000 with two spare wheels. It’s not cheap. Because each chair is made specifically custom, to the player. … [Looks down at his right wheel] That’s why I was going so slow at the end, because I had a flat tire. I had a flat tire! [Laughs] Oh, that’s bad, that’s bad. … I was wondering why it was getting so hard to push.

What’s the worst injury you’ve ever gotten playing this game?

The worst? I’ve had nine stitches here [points to his right eyebrow], and this finger was probably the worst. I had my finger down here, like this, and I was backing up, and one of those guys with the high picker came in, and you see that line right there? [points to his fingertip] … The whole thing was dangling. Oh yeah, about to fall. Nail and everything. That’s why the nail looks weird, because they had to take the whole nail, clean it off and just slide it back in, so the nail would grow. Pretty gross.

What is it that you love about this sport?

Of course, the hitting. The contact is probably No. 1. But, it’s fast-paced. It’s not slowed down, there’s no passing the ball all over the place for no reason. It’s a fast-paced game.

And when I first started playing, I learned so much. It’s rehab, basically, that’s what it is. Like when I first got hurt, I thought I was going to be driving a frickin’ big-ass van with a lift … for the rest of my life. I was like, “This sucks.” But at my first practice, there’s guys that have less function than me getting in a car, you know? Getting a chair in and out of a car. And I’m like, ‘Sweet.’