After a racist photo in Gov. Ralph Northam’s medical school yearbook surfaces, the governorship of Virginia is left in question. 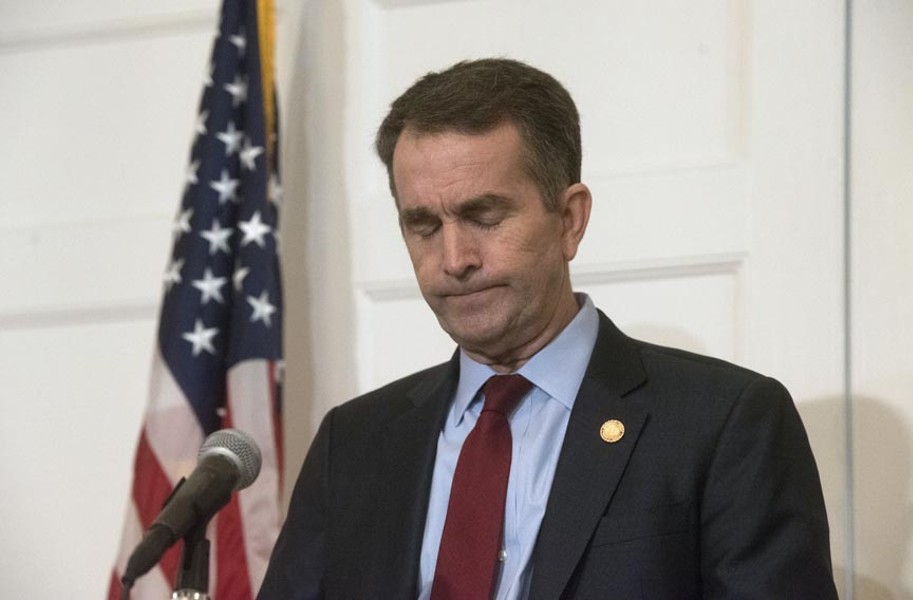 Scott Elmquist Gov. Ralph Northam glances down as he explains his actions to gathered reporters.

Monday morning in Capitol Square isn't exactly business as usual. Police officers mill around as dozens of protesters gather outside the Executive Mansion, chanting and bearing signs, determined to keep the pressure on Gov. Ralph Northam to resign.

As of press time early Monday afternoon, Northam had not done so, nor had the General Assembly given any indication that impeachment was on the table. Should Northam heed the advice of his Democratic colleagues, including both Virginia U.S. senators, Tim Kaine and Mark Warner, to step aside, Lt. Gov. Justin Fairfax would become the next governor.

But now Fairfax faces his own public relations battle: a sexual assault allegation.

Big League Politics, the same conservative blog that originally published the racist photo from Northam's yearbook, posted a story Sunday evening about the allegations of Stanford University fellow who says she was sexually assaulted at the Democratic National Convention in 2004.

Early Monday morning, the lieutenant governor answered with a statement on his Twitter account, calling the allegation from Big League Politics "false and unsubstantiated." He added that the Washington Post had decided not to run with the story.

The Washington Post later responded by clarifying that it had investigated the claims and decided not to publish, but said the Fairfax statement was incorrect in claiming the paper found "significant red flags and inconsistencies within the allegations."

On Monday afternoon, during a brief talk with reporters, Fairfax admitted that he had "100 percent consensual" encounter with the woman in question and described the allegation as "completely uncorroborated." The New York Times reported that Fairfax suggested "the accusations were part of an effort by allies of Mr. Northam’s to salvage a governorship that is listing due to the racism that still scars Virginia."

The Richmond Times Dispatch reported this morning that the Fairfax story was based on a "personal message by Adria Scharf, executive director of the Richmond Peace Education Center, that included comments from the alleged victim, a Facebook friend of Scharf’s." Scharf's husband, Thad Williamson, who has contributed op-ed pieces to Style Weekly, worked as a policy advisor for Levar Stoney's administration.

In the event of Northam's resignation, should Fairfax decide not to take on the role of governor, Attorney General Mark Herring would be next in line. Like many others, Herring has also called on Northam to resign.

It's been a rough week for Virginia Democrats, one which could have repercussions in next fall's elections. The same week that Northam received widespread criticism for what some felt were misconstrued comments on late-term abortions, he faced the uproar over the racist photo on his 1984 medical school yearbook page.

By Friday evening he had released a statement apologizing for appearing in the photo, but quickly began losing allies as Democrats and Republicans across the country publicly called for his resignation. Less than 24 hours later, at a bizarre Feb. 2 news conference inside the Executive Mansion, the governor walked back his previous admission of guilt.

"When my staff showed me the photo in question yesterday, I was seeing it for the first time," Northam said to a room full of reporters on Saturday afternoon. "When I was confronted with the image yesterday, I was appalled that they were on my page. But I believed then, and now, that I am not either of the people in that photo."

He went on to further shock viewers by admitting that he had worn blackface that year, dressed as Michael Jackson for a dance competition in San Antonio, which he won by learning to do the moonwalk.

You can't make this stuff up, folks.

"If you didn't think you were the person in the photo, I just don't understand why you would admit to it on Friday night," says University of Virginia Center for Politics communications director Kyle Kondik. "At the bare minimum, it was a total failure of crisis-communication PR strategy."

"The same impulse that led him to immediately apologize is the same impulse and style of politics that made his press conference so excruciating," says Richard Meagher, an associate professor of political science and director of social entrepreneurship at Randolph-Macon College. "His big strength has been the folksy, country-doc thing — but when you need someone to recognize the gravity and be a real politician, he apparently is not good at that."

Many people in Virginia and around the country are asking questions. And not just related to the strange details from the press conference. Others are wondering just why neither GOP opposition researchers for Ed Gillespie nor the media ever noticed the racist photo during the election, or the nickname "Coonman" beneath his Virginia Military Institute yearbook photo.

Regarding conspiracy theories that GOP operatives had this sensitive information and were simply waiting to use it, Meagher says he tends to go with Ocham's Razor, meaning the simplest explanation tends to be true.

"It's possible nobody knew there were yearbooks at this tiny medical school," he says, agreeing that it still does not explain why the offensive language in the VMI yearbook did not come up.

Mother Jones magazine reported that a Fox News reporter, Dan Bongino, claimed to have had the Northam photo for months but said he could not independently verify it was Northam in the photos.

Meagher says the big problem for Virginia Democrats is how this will affect momentum going into fall elections, where they had high hopes for gaining control of the House.

"Now with the Justin Fairfax accusations, they don't have a shining person to take over," he says. "They need to move past this very soon. They can't have this cloud hanging over the Democratic Party, which is not very well-organized. There's no strong moral voice now. Who's going to step up and say, 'Let's get our house in order'?" 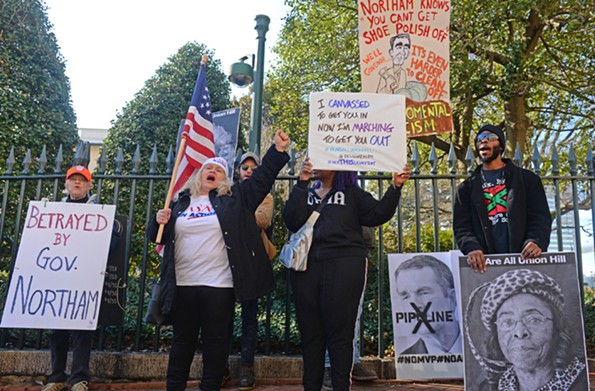 A wide variety of organizers and speakers at Monday's protest reiterate that this isn't a partisan issue. The prevailing theme of the rally is that Northam and politicians like him, Democrat or otherwise, had been implementing racist policies long before this photo surfaced. Speakers point to Northam's dismissal of two State Air Quality Control Board members before a crucial vote on the Atlantic Coast Pipeline and his support of a compressor station being built in the historically black neighborhood Union Hill as examples of his discriminatory tendencies. Northam also dressed as James Barbour, the 18th governor of Virginia and a known slave owner, for Halloween just last year, a protester pointed out.

Community organizer Omari Al-Qadaffi says this kind of racism is so pervasive in Virginia that party lines are irrelevant.

"It wasn't really a surprise to most of us when the pictures came out, because we've seen what's been going on the whole time he's been in office," Al-Qadaffi says. "A lot of white people wouldn't recognize racism unless someone gets called the N-word or unless you see a KKK hood. But we've been seeing it this whole time."

A Republican operative couldn't have planned the controversy any better, Meagher adds.

"This is now becoming what leftists call an intersectional debate. Now you have a black man next in line for governor accused of sexual assault — that brings in race, gender lines," Meagher says. "I'm not a conspiracy theorist, and certainly the conservative website helped promote this stuff, but if I were a Republican consultant and wanted to manufacture a mess, this would be it. It's a perfect storm."

With additional reporting by Brent Baldwin