What’s Next for Navy Hill?

Mayor Levar Stoney reflects on the failure of his signature project, laying blame on the lack of an “audacious” City Council. 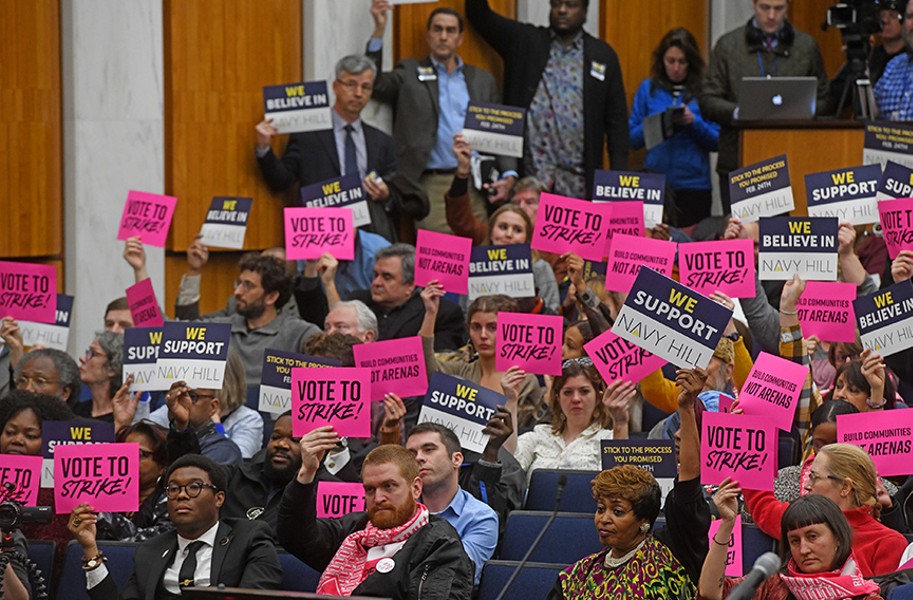 Scott Elmquist On Monday, Feb. 10, opponents and proponents of the Navy Hill proposal showed up early to City Council chambers for an informal meeting.

The $1.5 billion project Mayor Levar Stoney has championed since 2017 died in City Council chambers on Feb. 10.

The vote to strike the Navy Hill project instead of continuing it to a final vote scheduled for Feb. 24 followed more than two hours of public comment. Supporters argued the need for affordable housing and economic opportunities while opponents took on the motivations of the project’s backers and the need to replace the Richmond Coliseum, shuttered since February.

Now Stoney tells Style that he will not rush to begin another process “until I get a commitment [from council] that they will act in good faith moving forward.”

Going into last Monday’s meeting, the council had put forth a resolution supporting a new development process and said in a statement it was committed to working with the administration. The measure asked the city to conduct a small area plan with robust public input, an appraisal of city-owned land and an infrastructure assessment. Following that, it asks the administration to issue a new request for proposals to redevelop the area.

“The general take-away if you’re talking about the process and what could’ve been different is the way everything was sold,” says Justin Griffin, a local lawyer and critic of the project who runs nocoliseum.com. “It was never an honest conversation about the whole thing, it was all hidden in marketing and political spin instead of having an open and honest conversation with the people saying ‘Hey, do you want an arena? Do you want to spend tax dollars [on] an arena?””

Griffin believes the resolution council put forward is a repudiation of the city’s “top-down mentality.”

Advocating to continue the project at the next meeting were Andreas Addison of the 1st District, Ellen Robertson of the 6th, Council President Cynthia Newbille of the 7th District and Michael Jones in the 9th. “Our city and our citizens deserve our due diligence on any project before us to fully vet it,” Newbille said. “Not to try is not acceptable.”

By the end of the Feb. 10 council meeting, only Jones voted against the decision; Newbille abstained from the vote.

Stoney released a statement after the meeting that he was saddened that “Richmonders won’t benefit from the housing, jobs and economic empowerment this project would bring — and I’m disappointed that council did not follow through on the process they laid out to review and evaluate this transformative project for our city.”

The Navy Hill proposal called for a 17,500-seat arena, renovation of the historic Blues Armory, a high-rise hotel, more than 2,000 housing units, a new GRTC transfer plaza and more than 1 million square feet of commercial, office, retail and restaurant space downtown. At issue since the early stages of the process were a narrowly designed Request for Proposals that solicited one bid from a group headed by Dominion Energy’s chief executive, Tom Farrell, and the creation of a tax increment financing district including 80 blocks of downtown.

Legislation proposed by Delegate Jeff Bourne, D-Richmond, a former member of the School Board, that would have redirected state sales tax revenue and shrunk the size of the TIF district, was tabled in subcommittee this session.

Following Monday’s outcome, Stoney remained undeterred in his agenda to “build one Richmond,” focusing on many of the same priorities he championed in pursuing the downtown project: building more affordable housing, expanding transportation, increasing investment in public education and creating economic opportunities to build generational wealth.

“That’s been my agenda since day one and that’s what I’m going to focus on in the coming months as we wrap up this first term,” Stoney said in a phone interview following the vote. “Obviously policy will be at the center of us attempting to take Richmond to the next level. I think we presented a plan that would help grow the pie so we can focus on equity and instead the City Council rejected the opportunity, so now we’re back to a scarcity mindset of fighting over the crumbs.”

Some opponents of the project agreed on the necessity of meeting the latter ideals but disagreed on how the proposal was rolled out.

Stoney spokesman Jim Nolan says connecting the Coliseum closure to the project is a “false equivalency.” The city’s contract with the manager of the facility expired at the end of 2018, and the annual deficit of the “public liability” is calculated at roughly $1.5 million annually.

“They are two separate things,” Nolan says. “It costs more to keep the Coliseum open than it does to keep it closed.”

“We’re back to square one — now we have parcels of land in downtown Richmond that will not be generating any tax revenue that we use to invest in people, particularly the people that need it the most,” he says, adding that it sends the wrong message which “will be unfortunately impactful on the future of the city.”

The administration first put out a call for proposals in November 2017 and received one bid from the NH District Corp. in February 2018. The city and developer negotiated for 18 months, with Stoney unveiling the proposal in August. The council then created a residents’ panel to review the project, which issued a report stating the project posed a risk to schools. Earlier this month, a council-hired consultant issued a report, which Stoney praised, stating the project could drive growth downtown.

Stoney said in a statement that the third-party report confirms that the proposal is “written in the city’s favor and reaffirms our confidence that in the event of a default ‘the city has no legal or moral obligation and retains control if the development does not perform.”

He also noted that the report “asserts that the arena program and cost, as well as the financials associated with it, are reasonable and consistent with venues in comparable markets. ... Most importantly, the project’s effect on schools’ bottom line would be ‘net neutral’ at worst, and ‘positive’ at best.”

So what’s next for the mayor now that his signature project seems dead in the water? Instead of rushing to begin another process, he says, he will focus the remainder of his term on implementing effective policies and best practices.

In terms of what he learned from this controversial process, Stoney describes the last two years as “eye-opening.”

“I tried on multiple occasions to show the City Council ways to grow our tax base so we can invest in our priorities. I’ve done that through economic development plans and also through bold tax policy plans and the City Council has rejected both. Although I think they want me to be an incrementalist, the lesson I’ve learned is you got to brush yourself off and continue with an audacious vision for the city.”

Stoney still contends that being bold is “the only way we bring equity to the people who need it the most,” before laying blame squarely at the feet of City Council: