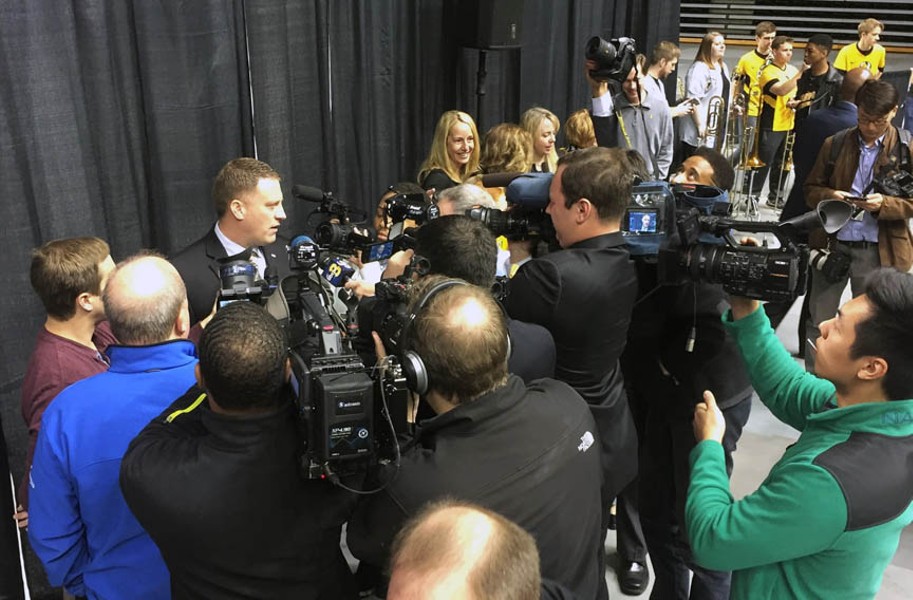 F.T. Rea VCU’s new head basketball coach, Mike Rhoades, is introduced to media and an enthusiastic crowd of fans at the Siegel Center.

It took less than 40 hours for Virginia Commonwealth University to introduce its new men’s basketball coach after Will Wade’s departure for Louisiana State University.

The news broke in the early evening of March 20. The situation had prompted the Rams’ athletic director, Ed McLaughlin, to drop everything and move quickly. If the search proved lengthy, the team’s incoming class of prized recruits could scatter. And the market is hot for new coaches this time of the year.

But by 11:30 a.m. March 22, McLaughlin was facing basketball players, media and a grandstand packed with happy fans at the Siegel Center.

“We don’t waste time here,” McLaughlin said. Then he introduced Mike Rhoades, who becomes the university’s 12th coach of men’s basketball since 1968.

The crowd lapped it up. No one in the festive space seemed to be missing Wade. The scene spoke eloquently to the positive momentum the Broad Street-based basketball program has accumulated during the last 15 years.

Rhoades, 44, spoke of his 21-year coaching career closing his remarks emotionally: “We’ve been on a ride for a long time. It stops here at VCU.”

Apparently Rhoades doesn’t waste time either. The next day he hit the road with the goal of securing as many of the incoming recruits as he could: Lavar Batts, Mayan Kiir, Sean Mobley and Marcos Santos-Silva.

Here are five other reasons VCU’s enthusiastic basketball fans are feeling good about their new coach:

1. Played his college basketball at Lebanon Valley College. Named by USA Today as the Division III national player of the year in 1995.

2. In 1996 he began his coaching career as an assistant to the legendary Hal Nunnally at Randolph-Macon College. Following three years of Nunnally’s mentorship, Rhoades began his 10-year stint as head coach at R-MC (197-76). He led the Yellow Jackets to four NCAA D-III Tournament appearances.

3. After five years on former coach Shaka Smart’s staff, he spent three years as head coach at Rice University. For the 2016-17 season he led the Owls to a 23-12 record.