What to Know About Mayor Stoney's Education Plan 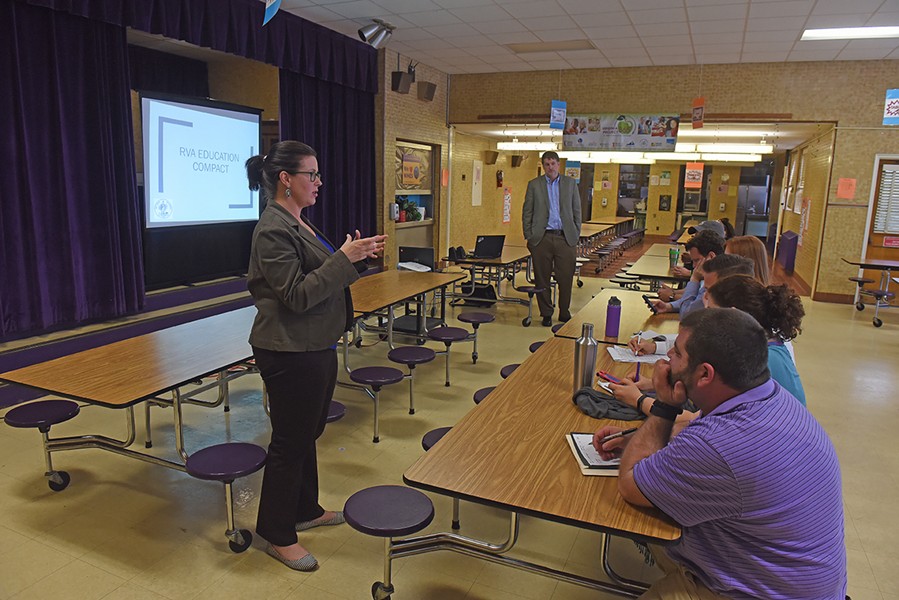 Scott Elmquist City Council member Kristen Larson and Thad Williamson from the city present the mayor's education compact to a group of people at Westover Hills Elementary School on Apr. 5.

Mayor Levar Stoney’s education compact, a key promise of his campaign, was released in February. Members of the School Board and City Council have embraced the idea of it, intended as a broad commitment to collaboration and not a strategic document.

“Bottom-line reality is that no one is satisfied with the achievement levels in Richmond Public Schools,” mayoral adviser Thad Williamson said at a 9th District meeting. “And no one thinks the schools are adequately supported.”

But the city has a lot of services to pay for, he said: “If we continue to fight over a smaller and smaller pot, we’re not going to get anywhere.”

Two more public meetings about the education compact will be held next week, with a final version going before elected bodies as a resolution, Williamson said.

What is the education compact?

The compact creates a team — that will meet monthly — of two council members, two board members, city administrators and a host of other representatives. It intends hold quarterly meetings of the full bodies of council, School Board and the mayor.

What do people have to say about the compact?

In recent public meetings, people asked if it would have full-time staffing — and whether the people on the team had time for another bureaucratic meeting. Questions were raised about how resident members of the team would be chosen.

At the Blackwell Elementary School meeting, Amy Wentz said she supported the compact, but was concerned about another top-heavy initiative: “I just want to ensure that it’s not just a bunch of folks that really don’t have any lower-level impact sitting around talking about things without any of the people really affected.”

Chris Lombardi at Westover Hills Elementary Schools wanted a concrete timeline for implementing student achievement goals. “I’m worried it’s going to get mired down,” he said. “We have to do all this discussion ... but in doing all this talking, nothing is actually getting done.”

What other concerns were expressed at meetings?

A former high-school football coach bemoaned rules that kept nonteachers from coaching. A woman wanted to discuss individualized education plans for special needs students. Ideas were exchanged about getting people to come to PTA meetings.

Funding was a huge topic. People wanted to know about the facilities maintenance plan and the chances of implementing a Roanoke-like model of a dedicated city funding stream for schools. Attendees lamented the local composite index, the state school funding formula that disadvantages cities like Richmond.

Not everyone thought the schools needed more money. Kandise Lucas asked Stoney, who attended part of the Blackwell meeting, for an audit of the school’s money “The issue is not enough money,” she said. “The issue is about competence.”

Teacher Latoya Thomas expressed frustration about behavior issues. “I can help a student with their math,” she said, “but when a student throws a chair across the room, all I can do is duck and get the rest of my kids to a safe place.”

Even School Board member Jonathan Young got off topic at Westover Hills, using the opportunity to push an idea about using facilities beyond the school day.

Williamson wasn’t bothered by meandering discussions. If anything, he said, they show a need for more schools-centric community discussions.