The paintings of the late Cindy Neuschwander ask what matters at the end of our lives? 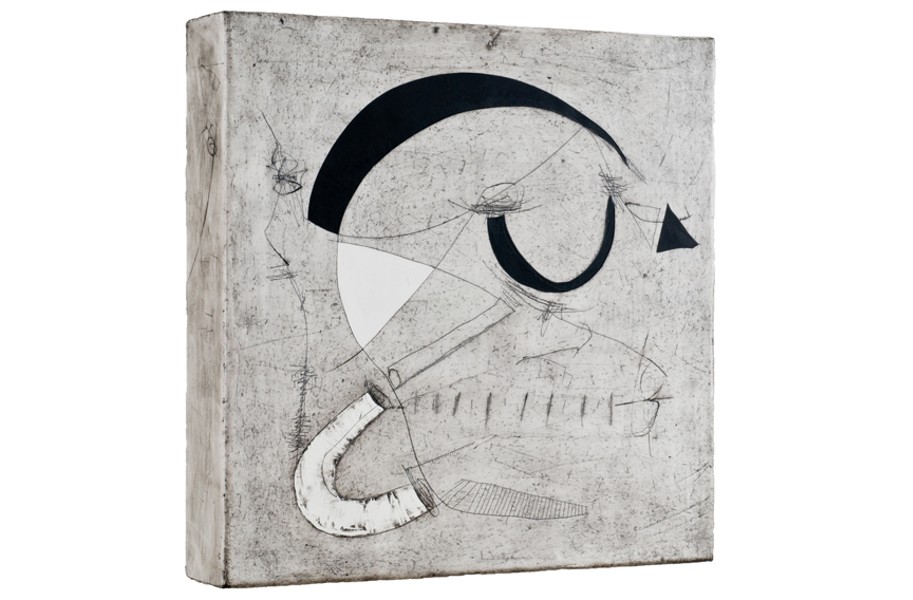 Slightly anthropomorphic, the vertical forms each sprout what appear to be a head, torso and limbs. Indeed, they are anthropomorphic, "The Couple" (2010), an oil, charcoal and wax on paper, is a self-portrait of the late Cindy Neuschwander and her husband, Jay Barrows.

Since Neuschwander's death in 2012, Barrows has unearthed many personal notes from his wife tucked away in her studio. He discovered this altered painting after her death.

"It was downstairs in her studio [in Nellysford, Virginia] and the last day we were there, which was Thanksgiving of 2012, she went down there by herself," explains Barrows. "What she did with that piece was she added the yellow wings. It was all black. I didn't see it until I came back. That was her last time in the studio."

Until this spring "The Couple" hung in Barrows' house. After some urging, he decided to part with it and the painting is prominently featured, alongside another 15 works chosen from his private collection, in "A Measure of Life" at Reynolds Gallery, on view through Aug. 23. A sister exhibition of Neuschwander's early altered photographs opens July 5 at 1708 Gallery.

Proceeds from the Reynolds show will go towards Neuschwander's grandchildren's college funds and sales from the 1708 exhibition will be donated to the Cindy Neuschwander Scholarship Fund, which awards money to local high-school seniors pursuing art degrees. To date, 63 students have received partial scholarships.

Neuschwander's work is diverse. Some paintings, like "Untitled" (2006) or "Shadowing the Red" (2006), feature a bright nearly neon color palette of orange or green. Most, however, are some combination of white, black, and gray. Many have remarked how Neuschwander favored mark-making, sgraffito and painting with wax.

There is urgency to her work and a searching akin to an archeologist who is scratching ardently in the dirt. Neuschwander didn't start painting until 1999, at the encouragement of Barrows, whom she married in 2002. She was first diagnosed with ovarian cancer in 2004. It is difficult not to summon allusions between Neuschwander's work and examples from Western art, such as Robert Motherwell's black-and-white abstractions, Eva Hesse's latex forms, Donald Judd's stacked boxes or Cy Twombly's scribbled canvases. Barrows points out that Davi Det Hompson, a Fluxus artist who lived in Richmond, was a direct influence on Neuschwander after she saw two exhibitions of Hompson's work in 1999.

In one sense, this diversity suggests experimentation: Trying on a style, pushing it to a limit and then shelving it for another. Yet there is a persistency here, expressed by the prolific output and the fact that she worked up until her death, leaving one to wonder what would've come next.

"Suture," a canvas with a vertical puncture wound down its center that has been repaired by another piece of canvas affixed by a row of stitches on either side, is the most appealing. While the representational "The Couple" is in black, white, and yellow, the other three paintings are abstractions made in the color of beeswax, which resembles human flesh. Moreover "The Couple" is assertive and hopeful with its golden wings while the other three are quiet, intimate, and somber. The two forms in the "The Couple" gain strength from companionship while the beeswax-colored paintings feel vulnerable, exposed, and damaged. But like the suture of the canvas, each is resiliently whole, damaged but not defeated. There is a thread of hope that undergirds each.

In our culture that favors the present and eternally young while cordoning off death, dying or the infirmed to the insulated spaces of hospitals and nursing homes, Neuschwander's paintings are a welcome reminder of the only certainty in life.

The title of the exhibition, "A Measure of Life," prefaced by the indefinite article suggests that these paintings produced from 2003 to 2010 are but one way of measuring Neuschwander's very full life. It invites visitors to ask the self-reflexive question: How do I measure my own life? What remains, what matters, at the end of my life?

Cindy Neuschwander, "A Measure of Life," is on view at Reynolds Gallery and an exhibition of Neuschwander's photographs opens July 5 at 1708 Gallery. For information, see reynoldsgallery.com and 1708gallery.org.