TheatreVCU’s “Intimate Apparel” explores the life of a Black seamstress in 1905. 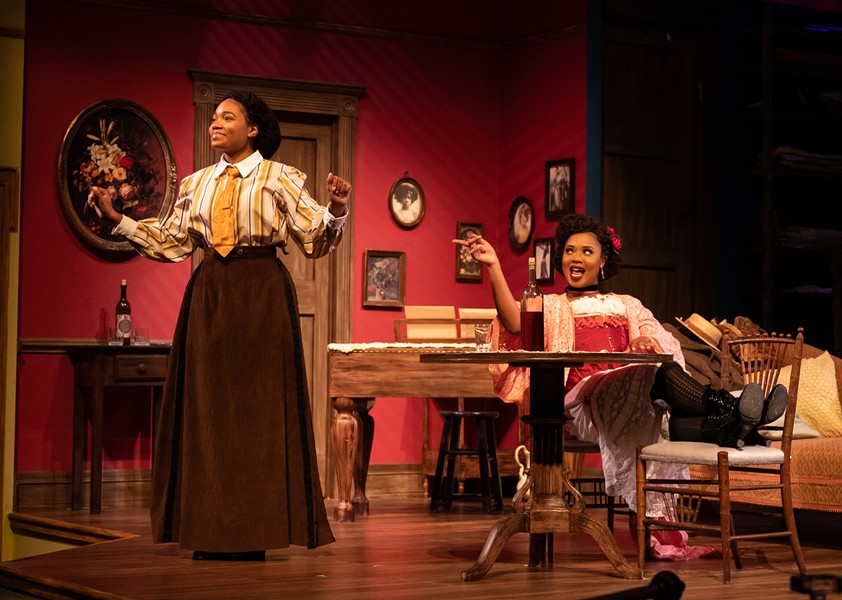 For the inspiration for her play “Intimate Apparel,” dramatist Lynn Nottage didn’t go far: she chose her great-grandmother, a seamstress in New York City around the turn of the last century.

Taking place in Manhattan in 1905, “Intimate Apparel” gives a fully realized portrait of Esther, a Black seamstress who sews elaborate undergarments from her room in a boarding house. At 35, Esther hopes to find love and saves for a day when she can open a beauty parlor that caters to Black women, treating them like royalty.

This weekend, TheatreVCU’s production of “Intimate Apparel” hits the stage, weaving a story of love and loneliness that touches on race, class and religion.

For the uninitiated, Nottage is the only woman to have won the Pulitzer Prize for Drama twice (for her plays “Ruined” and “Sweat”); she’s also the recipient of a MacArthur “Genius” Fellowship and was named one of Time magazine’s 100 Most Influential People in 2019. Presently, an operatic adaptation of “Intimate Apparel” with music by Ricky Ian Gordon is onstage at the Lincoln Center.

Tawnya Pettiford-Wates, a Virginia Commonwealth University professor of graduate pedagogy in acting and directing, co-artistic director of Conciliation Lab, and the show’s director, compares Nottage to Lorraine Hansberry, not only for being a Black female playwright breaking down barriers, but for her plays’ emphasis on everyday people.

In “Intimate Apparel’s” focus on a Black businesswoman as the Great Migration of African Americans from the South was beginning, Pettiford-Wates sees an illuminating story about ordinary characters that speaks to today.

“These people that were able to establish themselves as artisans and businesspeople in that kind of climate I find more heroic sometimes than the big sort of ‘Mount Rushmore names’ that we hear about,” says Pettiford-Wates, who’s often known by her nickname “Dr. T.” “The everyday men and women that began to establish the culture in New York, in Harlem, that were the predicators of Harlem Renaissance, are people that we don’t generally hear about.”

In the play, Esther corresponds with a Caribbean man named George who is working on the Panama Canal. As they talk of getting married without having met, Esther finds herself falling for Mr. Marks, a Hasidic Jewish man who sells her cloth. Helping her navigate these relationships are her landlady Mrs. Dickson, a sex worker named Mayme, and Mrs. Van Buren, a Fifth Avenue society wife who hires Esther to create craft lingerie. Over the years, Esther has saved a good sum of money to make her dream a reality.

“[Esther’s] fantasy is to establish her own beauty salon, particularly catering to the needs of Black women and making them feel pampered and cared for, because they never are ones who are pampered and cared for,” Pettiford-Wates says. “I can say that even today, when we’re arguing about a Black woman being appointed to the Supreme Court. Black women tend to be the last ones to be acknowledged, to be supported, to be lifted up, even though they’re lifting and supporting everyone else.”

“At the end of the day, all Esther wants is to be loved,” Howard says. “[The show] has so many outstanding lessons to be learned regarding life.”

Howard, who plans to graduate next year, says the dialect work has been one of the role’s biggest challenges.

“I have Southern family members, so it really helps to listen to other people speak in that dialect,” says Howard, who grew up in Alexandria. “I really had to dig into the history of the play during that time period. That really helped me get an understanding of Esther.”

Howard also had to bone up on her sewing. Though she’d previously taken a sewing class her freshman year, she had to undergo a crash course from VCU’s costume designers.

“They’ve really been helpful for me,” Howard says. “It’s really a different world. They light up when they talk about fabric.”

For its focus on love, female friendships and a storyline that’s often underserved, Pettiford-Wates says the metaphor in the show’s title is apt: “We’re not seeing the surface. We’re seeing what’s underneath.”