What Dreams May Come

Gideon Appah’s “Forgotten, Nudes, Landscapes” at the ICA looks at death, myth and reality impacted by the pandemic. 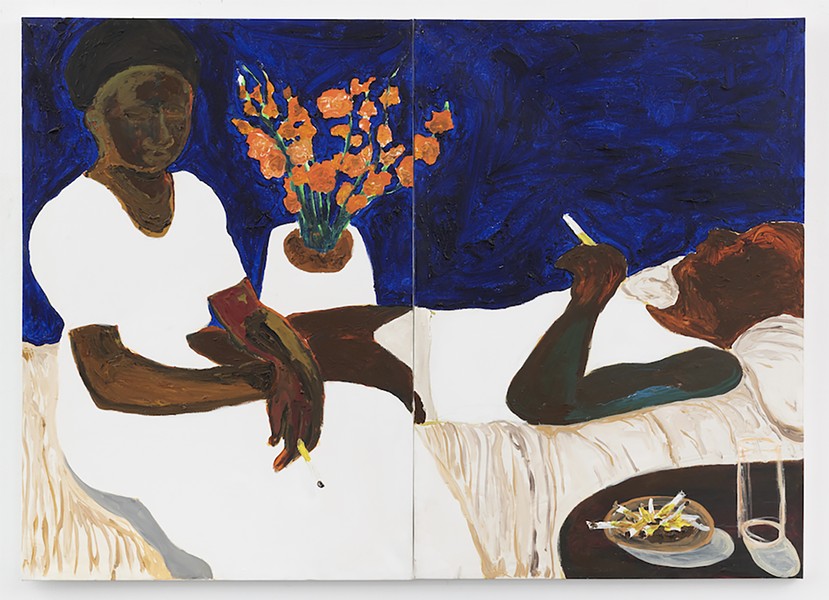 Adam Reich Ghanaian artist Gideon Appah's "The Older Couple," 2021. Oil on canvas. His exhibition "Forgotten, Nudes, Landscapes" is on display until June 19th at the ICA at VCU.

In 1957, after centuries of colonization by various European countries, Ghana became the first colony in sub-Saharan Africa to achieve sovereignty.

The country became influential in Pan-African and decolonization efforts, but also saw the government of its authoritarian first president and prime minister, Kwame Nkrumah, overthrown in a 1966 coup. Between then and the mid-1980s, Ghana alternated between civilian and military governments, and experienced economic instability.

Taking inspiration from newspaper clippings, films and entertainment posters of this period, Ghanaian artist Gideon Appah aims to explore his country’s cinematic and popular culture in “Forgotten, Nudes, Landscapes,” his current exhibit at the Institute for Contemporary Art at VCU in Richmond. The exhibition is Appah’s first institutional solo show in the United States.

“Gideon started his career thinking about the rise and fall of culture, leisure and democracy in Ghana,” says Amber Esseiva, curator at the ICA. “He was looking at how that is reflected in news media.”

Ghana’s major theaters – such as the Roxy and the Rex – doubled as concert venues and were the height of country’s nightlife. These cultural touchstones loom large in Appah’s work.

Many scenes merge Appah’s own memories of growing up in Ghana with images from vintage Ghanaian movies, such as “Kukurantumi: Road to Accra,” “I Told You So” and “The Boy Kumasenu.” The works reflect a feeling of national pride from the period just after Ghana gained independence.

But in “Forgotten, Nudes, Landscapes,” Ghana’s nighttime world of movie marquees, cab drivers and men in suits smoking gives way to more haunting imagery of decaying fruit, daggers and severed hands. The exhibition, which was commissioned by the ICA, encompasses a shift in Appah’s work.

When Appah began working on the commissioned exhibition in early 2020, his focus was on Ghanaian culture at its peak. But as the pandemic progressed and the world shut down, Appah turned inward to images of dreams and death.

These evocative paintings feature bleak landscapes, dark images of large horses and domestic scenes of death and solitude. One series includes a woman holding daggers, a skull and an assembly of items presented in front of theater curtains.

Esseiva says the exhibition fits with the ICA’s mission to remind people of their connection with other parts of the globe.

“We’ve been really pushing ourselves, as far as our program, to think outside of our circle in the United States,” Esseiva says. “We also really focus on young artists who haven’t had a big museum show. Gideon was kind of perfect. He was up and coming.”

Gideon Appah’s “Forgotten, Nudes, Landscapes” is on display until June 19 at the Institute for Contemporary Art at 601 W. Broad St. For information, visit icavcu.org or call 828-2823. 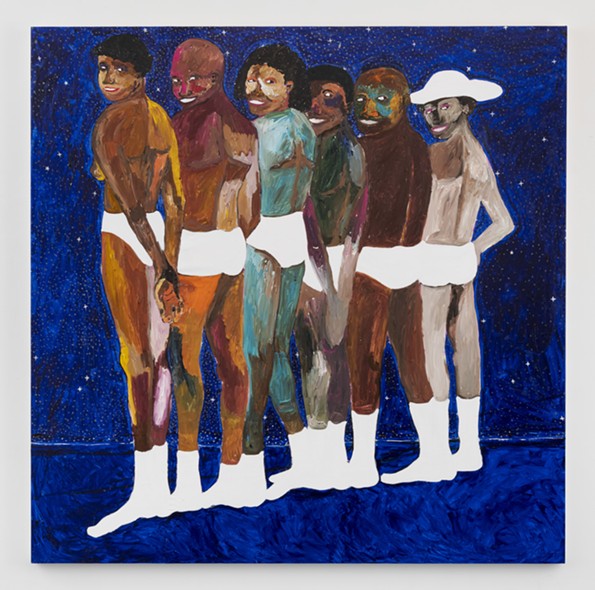