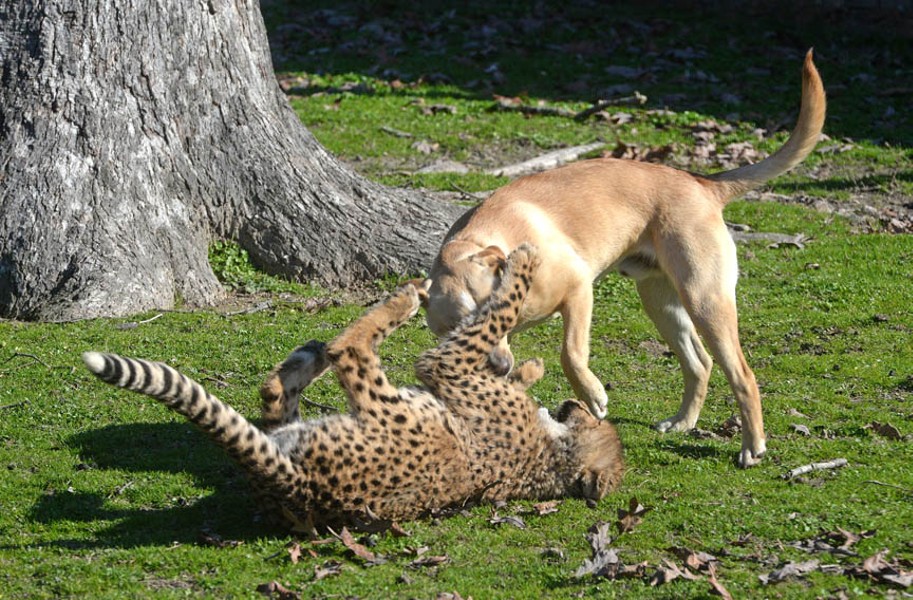 Scott Elmquist With all the depressing garbage online, blossoming friendships like the local one between cheetah cub Kumbali and a puppy named Kago, are proving to be internet gold as well as a driver of attendance numbers.

Cats: They want to rule the world.

There are more than 2 million cat videos on YouTube, according to the journal Computers in Human Behavior -- and they’ve racked up 26 billion views. People tend to watch them on the sly, too. Of the 7,000 people the journal surveyed, many said they watched cats when they were supposed to be working or studying.

But it can be educational, says Justin Andelin, general manager at the Metro Richmond Zoo. And talk about cat videos. On Oct. 6, the zoo produced one showing the friendship blossoming between its cheetah cub, Kumbali, and a puppy named Kago. More than a million people viewed it within a day, launching the pair into the national spotlight on such platforms as the “Tonight Show” and Animal Planet.

But it turns out that there’s more to their popularity than the aw factor.

People in fields as diverse as animal science, advertising and anthropology say that gorging on cuteness can have some unintended, even positive, side effects.

Kumbali and Kago enjoy a sophisticated level of communication while inspiring complex emotions inside human observers -- a perfect Internet meme.

“The story of Kumbali and Kago is a highly relatable one,” says Andrew LeVasseur, a professor at Virginia Commonwealth University’s Brandcenter. “Two friends from very different backgrounds, coming together to overcome great odds. As humans, we can project a lot of our own personal hopes and fears, aspirations and limitations into this story.”

He cites the research of Jonah Berger and Katherine Milkman, professors at the University of Pennsylvania’s Wharton School of business, who want to know why animals are so irresistibly popular online. It’s like a secret handshake, they say. People find comfort in knowing that someone else has seen that weird picture of a chubby-cheeked cat, with the absurd caption, “I Can Has Cheezburger?”

LaVasseur suggests that Kumbali and Kago also trigger some kind of stress relief. “Watching them, it’s a fairy tale come true,” he says. “And it could happen to you.”

A majority of people in the Computers in Human Behavior study reported that watching cat videos reduced negative emotions. They also said they felt more optimistic. Any guilt they experienced by procrastinating was dissolved by a sense of bliss. One of the most top-rated comments on the original Kumbali and Kago video simply says, “Whoever is reading this, I hope you have an amazing day!”

But several viewers also felt a sense of worry and morbid curiosity. “A lot of people say things like, ‘It won’t be long before the cheetah eats the dog,’” Andelin says. “But in reality, that will never happen.”

There’s a reason why people feel such a mix of emotions, says Barbara King, an anthropology professor at the College of William and Mary and the author of “How Animals Grieve.” In her book, she describes the tug of war between people anthropomorphizing pets and believing that they’re driven by instinct.

People know it’s impossible for dogs to have inner monologues, but the Doge meme -- based on pictures of a Shiba Inu, with captions in broken English -- clicks intuitively for thousands of people. And fans know that Grumpy Cat isn’t actually grumpy. The cat suffers from feline dwarfism.

“So many animals, depending on the species and the individual personalities in question, actually yearn for social connection with us and other animals,” King says. “Even across species lines, animals can develop friendships that are more than just social bonds. Kumbali and Kago fit that definition.”

At the zoo, Andelin says that Kumbali’s mother, Khari, wasn’t producing enough milk for all of her cubs. Kumbali has two siblings, and exhibits a passive personality. After a drastic reduction in Kumbali’s weight, zoo staff began to bottle-feed him. But male cubs need companions, so the San Diego Zoo provided advice through its pilot program of pairing canines with cheetahs. Metro Richmond Zoo decided to rescue a Labrador from a shelter with high kill rates.

“They actually have different personalities, with the dog being more dominant,” Andelin says. “But they’ve adopted a highly evolved social structure seen amongst other male cheetahs, called a coalition. It’s a very close bond.”

He hopes Kumbali and Kago will become ambassadors for the zoo, which means more frequent contact with humans and other animals. “We’ve already made several new videos where Kumbali and Kago interact with penguins and hogs,” Andelin says. “People should expect to see more videos in December.”

But King wonders if this is taking an Internet meme too far.

“Let’s not forget that some of the viral animal friendship videos out there aren’t what they seem,” she says. “The video of an orangutan feeding tiger cubs comes from a facility in South Carolina that exploits animals for money. And we can’t forget that Metro Richmond Zoo is an unaccredited zoo.”

Andelin says that Kumbali and Kago in no way are being abused or exploited because of their unusual friendship. Metro Richmond Zoo is a for-profit operation accredited by the Zoological Association of America. Some, like King, prefer accreditation through the Association of Zoos and Aquariums.

Regardless, attendance has spiked at the zoo because of Kumbali and Kago, Andelin says, with people elated to see that the characters in their favorite YouTube video actually exist. “I’ve been floored by people’s reactions,” he says.