At a vigil for his 9-year-old daughter, Markiya Dickson, Mark Whitfield calls on the community to come together to stop the violence.

“Look what I’m holding in my hands,” Whitfield says, lifting up the young child. “One of my babies. My last baby I have. My middle one gone. My monkey in the middle gone. I can’t get her back, but she will live on.”

Surrounded by family, friends and community members, Whitfield leads a short remembrance ceremony for his daughter, Markiya Simone Dickson, who died in that same park over Memorial Day weekend. Markiya, a 9-year-old third-grader from Chesterfield County, was shot when a fight broke out near the basketball courts on Sunday, May 26. According to the latest reports, police are still searching for three suspects.

During the vigil, attendees pay respects to a large photo of Markiya and leave tokens like flowers and stuffed animals. Bright, cheery balloons featuring Disney princesses, Minnie Mouse and pink tiaras bob up and down as Whitfield continues to speak.

“I don’t care your skin color, your job title, none of that, it don’t matter. It all starts in the community, us building each other up. We can’t blame the police, we can’t blame nobody but ourselves because it starts at home, it starts in the community,” he says. “We gotta all stick together. What’s going on is bigger than us, but it’s going to change. We’ve got to make a change ourselves.” 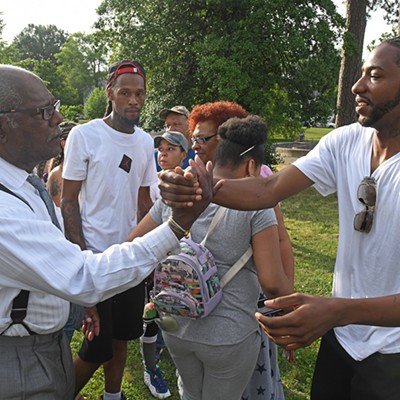 Several attendees wear pink T-shirts featuring a photo of Markiya on the front and the hashtag #stoptheviolence on the back. A friend of the Dickson family, who wished only to be identified as Tay, says violence and neighborhood safety have been on her radar for as long as she can remember. She grew up in New York, where she recalls being advised by neighbors which streets and alleys to avoid, and now as a mother of preteens and teenagers, she has the same conversations with them.

“I try to be realistic with them about situations so they know exactly what to expect in the world, so they’re aware and they’re not oblivious to things that’s going on as far as crime,” she says. “Anything can happen at any time. Just being prepared, watching your surroundings, not being in certain places that aren’t known safe places.”

Tay, who’s lived in Richmond for about 10 years, says overall she doesn’t feel unsafe or fearful in her community. But that doesn’t mean she isn’t vigilant.

“Not only are my kids kids, they’re African-American kids. I have an African-American son, so he has a different target on his back anyway just being a black male growing up in America,” she says. “So it’s mandatory. They have to have these conversations.”

As the vigil winds down, activity inside the park continues. Teenagers fly down the skate-park ramps on their skateboards, softball teams take to the fields for evening games and parents watch their children on the playground.