Atlanta’s Coathangers no longer are a novelty girl group. 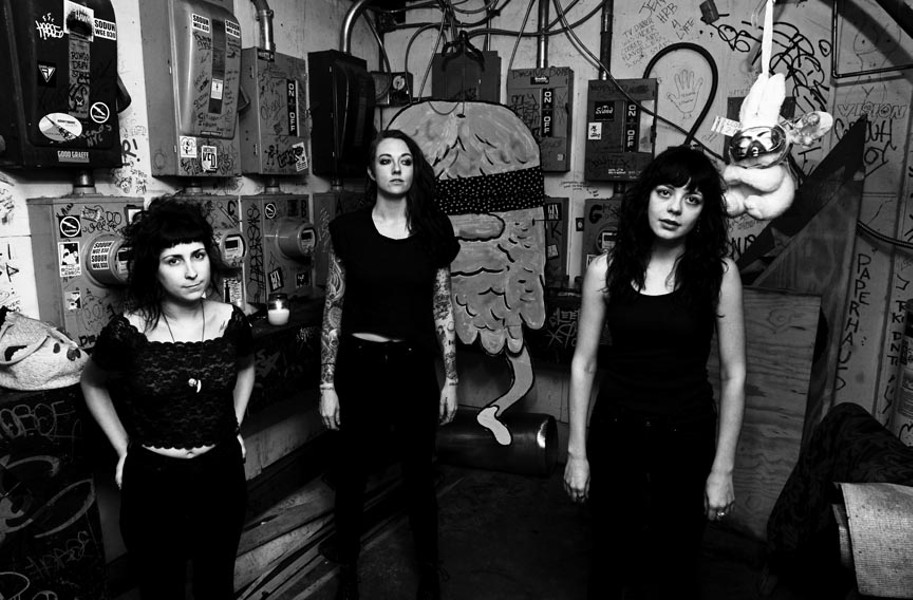 Seven years since their formation, Atlanta-based garage rockers the Coathangers have grown up considerably. They've come a long way from writing such surly little songs as "Nestle in My Boobies" and "Don't Touch My Shit," and being in a band just to hang out at parties.

"We still like to get wild and crazy, but you can only bang your head so many times," says guitarist and vocalist Julia Kugel, aka Crook Kid Coathanger.

For years they've endured smack talkers who called them a novelty girl group. The young women who once declared their name "ballsy, yet not too controversial and pro-do whatever the hell you want to do with your life" acknowledge that before becoming musicians, they were in a band just to have fun.

Their tenacity and who-gives-a-flying-fuck attitude always have been rewarded by devoted followers packing dive clubs and house shows. But their fourth full-length is a game changer garnering critical praise. They've even got enough pull to get the metal guys of Mastadon in drag for the video to their latest single, "Follow Me." Hell, the Coathangers have become kind of a big deal.

Their latest album, "Suck My Shirt," got its name by accident.

"We were in the studio drinking tequila one night and it spilled on someone's shirt. Not a problem. Just suck my shirt," Kugel says. "It was like whatever happens, happens. It'll be fine."

While that easygoing attitude has been a guiding force for the band, the new album is anything but laid-back. With the amicable departure of keyboard player Candice Jones, aka Bebe Coathanger, the trio is a full-fledged force of bare bones punk 'n' roll marrying the dissonance of squabbling guitars with gnawing bass and an appropriately snotty attitude. Longtime fans will recognize reworked songs from split 7's, but this isn't a polished pop record for Target's next ad campaign. Everything is just strident enough to keep it punk, with the occasional pop sensibility of such tracks as "Merry Go Round," a departure from the band's previous work. Sometimes it embraces the bounce and prowl of Le Tigre, other times the feistiness of the Black Lips.

All of the tracks are flawlessly written, surprising given the lack of focus on that sort of thing. "Almost nothing we do is intentional," Kugel says. "We never say we want a song to sound a certain way. We're not looking to create a summer jam, you know? If it happens though, that's cool."

And diversity is a key. "We try to put a diverse group of songs because no one wants to listen to a record and hear the same song over and over," she says. "It's something we've always prided ourselves on."

The guitarist also says the group is proud of reviews that call the record grown-up. "Hearing that isn't an offensive thing," she says. "We're adults, not teenagers, so it's really a compliment."

But is the front row still splashed with beer and sweat at the end of a Coathangers? You bet. "Partying is the fun of this," Kugel says. "Let's say we're Team Never Too Much, But Just Enough. That's our team."

At the band's Strange Matter show next week, the bill features two of Richmond's finest garage rock bands, the Nervous Ticks and the Ar-kaics. The Coathangers are excited to play here again and gives Richmond cred as one of the first cities to treat it like a real touring act.

"We played Gallery5 and we got our rider filled," Kugel says of the contract the band sent out for backstage needs. "We showed up and they had towels, individual packs of gum for us, anything we'd asked for. It ruled." S

The Coathangers play Strange Matter on April 22 with Audacity, the Nervous Ticks and the Ar-kaics. Doors open at 9 p.m. Admission is $10. Show is 18 and older. Information at strangematterrva.com.