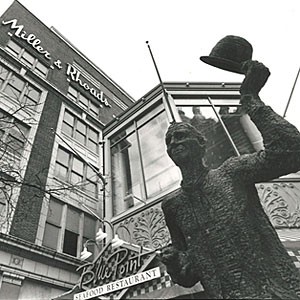 Last seen with: A mouse and a sinister-looking cat, at Sixth and Grace streets, where he'd stood since 1985.

The whimsical bronze statue was sculpted by Jack Witt, who also created the Bill “Bojangles” Robinson statue in Jackson Ward. Mr. Smedley was installed at one entrance of the 6th Street Marketplace, the much-fA¦ted downtown mall that was supposed to revitalize downtown and mend race relations.

The marketplace was demolished in 2003 to build what became CenterStage. And sometime after that, Mr. Smedley, also known as “The Street Entertainer,” vanished.

Darrl Davenport, an art enthusiast (and a past writer for Style) wanted to know where the statue had gone.

“Someone paid for it. Where is it?” Davenport asked. “I hope it's not in someone's backyard, up there in the Fan, you know?”

It didn't seem like the kind of thing you'd misplace.

The Valentine Richmond History Center owns pieces of the old marketplace's clock, but Director Bill Martin had no idea where the statue had gone. No one else seemed to know either.

When told about the missing statue, Dolly Vogt, who is regional general manager for Richmond CenterStage, was intrigued. “It sounds fabulous,” she said. Vogt vowed to find out what had happened.

Last week she did: The city's parks department had Mr. Smedley in storage, waiting for an opportunity to install him in a park.

“I actually just told the parks department that I might want it back,” she says. Mr. Smedley is in show business, after all.