With his new “Family Guy” spinoff, actor and writer Mike Henry brings it all back home to Richmond — sort of. 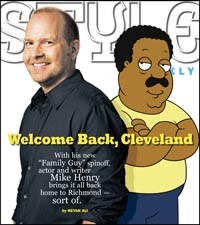 Mike Henry's childhood holds inextricable ties to an idyllic Richmond. Long before he voiced, wrote and co-produced “Family Guy” and the new “The Cleveland Show” (debuting Sept. 27), he was a boy living on Grace Street. “I grew up in a place right by where the Downtown Expressway runs now,” Henry says. “At the time, it was just a gorgeous ravine with a train track running through it at the bottom. For anyone that remembers that, it is now completely different.”

>Soon thereafter, Henry's family moved to the West End where he attended Montessori school, played on a rope swing on the James River and participated in Tuckahoe Little League Baseball from ages 9 to 15. During his high-school years at Collegiate he bagged groceries at Ukrop's on Patterson Avenue. He's best-known for big-time television work, but he cherishes local media memories: He recalls his mother frequently tuning into radio station WRVA and Charles Fishburne anchoring the local news on WTVR. His youth was about “really taking advantage of all that is Richmond,” Henry says. “It was a great, comfortable, wonderful town.”

By the time he graduated from Lexington's Washington and Lee University, Henry had the idea that he wanted a career in show business but wasn't where he needed to be. So at 24, after an advertising internship at the Martin Agency, he “blindly” moved out to Los Angeles to “find a way in comedy.” Three years of stand-up, improv and lots of writing later, he returned to Richmond to put together a performance demo. “I just can't seem to shake Richmond,” he says. “I'm here as much as I possibly can be. I love it here. My future is here.”

Henry's interest in voice acting developed in his childhood as he created characters for prank phone calls. His first professional voice-acting gig came through producing radio ads for the Virginia Lottery in 1991. “It did take a while to get the opportunity,” Henry says of voice acting. “So many try to do it.” From there, he found additional acting (both voice and otherwise) and stand-up work throughout the '90s. As he does most of his acting in comedies, he says his approach to any part involves memorizing the lines, identifying the joke and “relaxing and being in the moment.”

The biggest break of his career came courtesy of Seth MacFarlane, a Rhode Island School of Design graduate who once shared the screen with Henry in student films shot by Henry's brother. MacFarlane had created and sold “Family Guy” to FOX in 1998 and wanted Henry to do some voice acting and behind-the-scenes work for the fledgling animated comedy. Henry accepted. Since its debut in 1999, the acerbic show has seen times both bleak (being canceled in 2002 after three seasons) and remarkably fortunate (being revived for a second run in 2005). Ten years later, it's become a pop-culture fixture and, after receiving an Emmy nomination for outstanding comedy series this year (the first animated program to do so since “The Flintstones” in 1961), is arguably at its creative peak.

Cleveland Brown, voiced by Henry, was introduced in the original “Family Guy” pilot. As a drinking buddy to vindictive, dunderheaded protagonist Peter Griffin, the amicably overweight character's carefree attitude and subdued charm made him an excellent foil. While Cleveland was one of a handful of personas Henry would voice on the show (others included the Greased-up Deaf Guy and aging pervert Herbert), he quickly gravitated toward the character. “I think Cleveland is kind of me,” Henry muses. “He's always been my favorite. Over time, he developed more than the other characters. I would say recently there seemed to be a lot more to him than there was room for on ‘Family Guy.’”

>Henry began pitching Cleveland's voice in the “Family Guy” writer's room early in the series, patterning his distinctive style of speech after a fellow he once played basketball with who turned the word “Maryland” into “Merlin.” His personality was a composite of sources, one of which is NBA player Sam Perkins, who the actor calls “unflappable, just completely laid-back.” Though Henry had nothing to do with the character's physical form, he affirms that “the artist who drew him pretty much nailed the essence of the voice.”

Being that Cleveland is black and Henry is white, the voice actor frequently receives questions about race, especially as “Family Guy” is always willing to crack jokes stemming from the character's skin color. Henry tends to shrug off such complaints, feeling that the character contains more depth than a simple stereotype. “It seemed that Cleveland was just considered a black guy [on ‘Family Guy’],” the actor says. “They've brought him back several times [since beginning “The Cleveland Show”] and almost, without exception, every time I do a Cleveland bit, it's about being black. I know there's much more to him than that.”

When discussions of a “Family Guy” spin-off began in 2007, Cleveland stood out as the primary candidate for his own series. The premise originated with the idea that Cleveland would leave his hometown of Quahog, R.I., with no long-term plans prepared. “I basically said that he'll move back to Virginia and reconnect with an old lover,” Henry says. “We went from there.” As Cleveland's hometown of Stoolbend, Va., was concocted, Henry's fondness for Richmond began to seep into fiction.

In contrast to his relatively small role of writing and voicing “Family Guy,” Henry plays a role in every process of “The Cleveland Show.” His influence touches all elements of production — writing, voice work, character design, storyboards, coloring and animation — he's most happy to steer the tone of the show. “‘Family Guy’ is certainly more mean-spirited than me,” Henry says. “I cringe at a lot of the things that have been done on ‘Family Guy.’ They are not necessarily things that I would say but you go along with it because your job is to contribute to what that show is. On this show, we have a much sweeter sensibility.”

While “Family Guy” relies on provocative, dark humor, “The Cleveland Show” is less abrasive. “I realize that there's a difference between what me and my friends think is funny and what is going to be received with affection,” Henry says. “I want people to really like Cleveland and our family that we've created.” He elaborates: “We're not trying to be ‘Family Guy’ or push the envelope. We're more of a contemporary ‘Cosby Show’ living in a world that ‘Family Guy’ created. They push the envelope far enough. We don't need to push it any further.”

Both the Griffin and Brown clans contain the same set-up: a father, a mother, a daughter and two sons. Henry used the familial structure because the roles were “established, proven commodities” but he finds some definite differences; the primary one being that the lead cast of “The Cleveland Show” is made up of a blended family (Cleveland rekindles with high-school flame Donna Tubbs to kick off the series, and the two are soon married). Unlike Meg Griffin, Roberta Tubbs is “a hot daughter” and “a different flavor of teenage girl.” Juxtaposing the socially adept Roberta is stepbrother Cleveland Jr., an obese, prepubescent 14-year-old who is “nothing like Chris Griffin.” Donna's son, Rallo (also voiced by Henry), is a “streetwise and sexually interested” kindergartener.

Highlights of the show's inaugural season will include reoccurring guest appearances from Kanye West (as Cleveland Jr. rival Kenny West) and media bigwig Arianna Huffington (as one of the religious bears, yes bears, living next door to Cleveland). “Cleveland” will also contain musical numbers more funk-driven and '70s- and '80s-inspired than the material found on “Family Guy.” 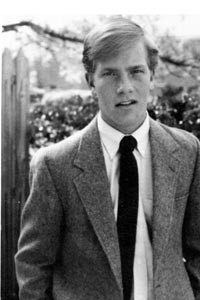 >Formidable expectations hinge on the new program (discussion of a movie has apparently already begun). “Growing our animated slate has been a big priority for the network,” says Shana Waterman, director of current programming at Fox. “We'd definitely like this show to be another building block within our overall animation domination lineup.” Describing the program as “a great mix of cutting-edge humor and great heart,” she says the addition won't oversaturate the “Family Guy” brand because “Cleveland” speaks with “a special voice of its own.”

Incorporating “Cleveland” into the network's Sunday night lineup (which features juggernauts “Family Guy” and “The Simpsons”) is an instrumental step toward its success, notes Daniel Manu, site director of Television Without Pity, an online resource of TV news and recaps that averages 50 million to 60 million page views per month. (TWP is owned by NBC Universal; Manu emphasizes that the site maintains editorial independence.)

“I definitely think it's going to be a hit for Fox, although I am not ready to say that it will be as big as ‘Family Guy’ because few things [on TV] are as big as ‘Family Guy,’” Manu says. By adjusting the show's sense of humor and choosing a soft-spoken protagonist over a buffoon, Manu says the show could both alienate hardcore “Family” fans and reel in those turned off by the original show's edginess. As it's difficult for spin-offs of even unanimated shows to succeed, the new show occupies an unusual role in Fox's lineup. “It's an important part but it's not critical,” Manu says. “Thanks to the other hits [Fox executives] already have, they have the leeway to do experimental things like ‘Cleveland.’”

Henry remains confident that the tone of “The Cleveland Show” will set it apart from both its predecessor and the rest of television's ever-competitive marketplace. The audience will be broader than that of “Family Guy,” he says: “We just have a fun, positive message, we do some celebrity slamming, and we have plenty of filthy jokes — no religious component. I don't see why we won't be the best show on TV, frankly.” S

To Watch
The series premiere of “The Cleveland Show” airs Sunday, Sept. 27, at 8:30 p.m. on Fox, locally WRLH Channel 35. To see a trailer of the show from Fox CLICK HERE.

Common Sense: The comedy of “Cleveland” comes from its Everyman, not some buffoon.

Believing in Bluffington: Richmond resonated through an earlier cartoon.