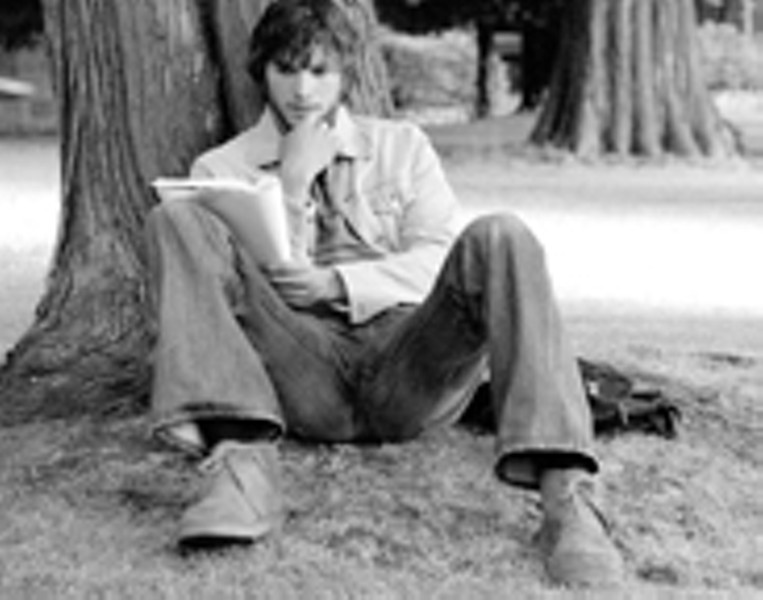 Cool theories, however, don’t necessarily guarantee good stories, which is one reason “Planet of the Apes” wasn’t titled “Special Theory of Relativity.” In that film, science furnished a springboard for imagination. In “The Butterfly Effect,” it’s merely an excuse for trotting out an old formula, and a pretext for Ashton Kutcher to try an ill-fitting dramatic role on for size.

Kutcher plays Evan Treborn, an affable genius destroying the grading curve at his college as he seeks to change the way science understands “memory assimilation.” His ambition stems from his most unfortunate childhood, during which he was afflicted with recurrent blackouts, usually preceding calamitous episodes of violence and abuse that befell him and a trio of friends. These trials don’t keep him from becoming the swingingest geek on campus, but his friends don’t fare so well: One becomes a murderous thug, another is practically catatonic and a third, the true love he left behind, dies by her own hand.

Fortunately, in a twist only slightly less credible than the casting of Kutcher as a whiz kid, Evan discovers that reading certain passages of the diary he kept as a child has the power to cast him back to the pivotal episodes of his youth, with his post-adolescent consciousness intact. (Those who haven’t been keeping up with recent trends in meteorology should rest assured that the butterfly effect does not imply the existence of magic journals.) From that point on, the movie recounts Evan’s attempts to go back and correct the past. He returns again and again to the crises of his childhood, but he fails to anticipate all of the consequences of his intended remedies. So once he is ready to launch himself into the past one last time, all he has done is create new sets of disasters and disappointments, some of them funny, others truly gruesome. In a word, he is repeatedly punk’d by the space-time continuum.

The mindless pleasure a film like this can deliver is kept at bay by a creepy earnestness that mars the plot. Ultimately, all the evil in the film flows from one source, which we are encouraged to regard with a mixture of dread and contempt: It’s called Dad. The 8-year-old Evan (Logan Lerman) suffers from a “missing father complex,” since his sire has been locked up, driven mad by the time-travel bug he passes on to his boy. But if absent fathers are bad, the ones who stick around are even worse, as we learn when we meet Evan’s sweetheart’s dad, played with accomplished sleaziness by Eric Stoltz. This paterfamilias turns out to be an aspiring auteur of kiddie porn, and his repellent crimes set the stage for all the disasters to come.

Straining to flatter the young adults at whom the movie is aimed, “The Butterfly Effect” is at bottom a fairy tale in which the healing of the world depends on the ability of children to overpower their elders. At one point, a character wise to Evan’s tampering with the lives of others warns him, “Just by being here you may be killing your mother.” Given the film’s hostility to parents, that line seems really to be addressed, in a spirit of hope, to the disaffected teens in the theater.

Further elbowing into young viewers’ comfort zone, “The Butterfly Effect” attempts to make itself as much like a video game as possible, casting Evan, who busily manipulates everyone around him, as a heroically transformed version of the kid sitting endlessly in front of the tube, sending the figures at his command from one donnybrook to another. As a result, the characters have less in common with real human beings than they do with tokens in a board game, chasing each other repeatedly past the same landmarks. This doesn’t leave much room for acting, so the question whether Kutcher can carry his own in a real drama must remain open for now. All that can be said is that this film requires very little of him, and that’s what he successfully manages to deliver. ** S