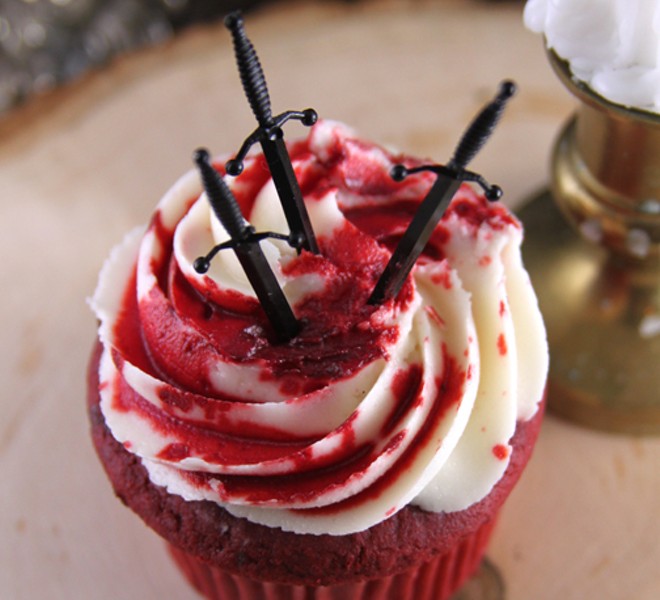 Carytown Cupcakes' Red Wedding cupcake, in honor of the Game of Thrones premiere on April 24.

Dinner’s Ready: Kinsfolk restaurant in the former Chef MaMusu’s African-Caribbean Cuisine at 3516 Forest Hill Ave. has stopped serving lunch to focus on its booming dinner business. Its hours are now Tuesdays-Saturdays from 5-10 p.m. and brunch on Saturdays and Sundays 9 a.m.-2 p.m. kinsfolkfood.com.

Expansion: Burger Bach plans a location in Midlothian and another in Charlottesville, as reported by the Times-Dispatch. … Whole Foods Market Short Pump renovated its wine section, and now boasts 48 taps, a chef’s station, beer and wine by the glass or bottle and happy hour specials. wholefoodsmarket.com/stores/shortpump.

Pick It Up: Café Rustica has put out its own app so that diners can order to-go items online with the flick of a finger. caferusticarva.com.

Happenings: During the week of April 18-May 1, those feverishly creative experts channeling pop culture through the medium of cake and icing at Carytown Cupcakes will celebrate the return of HBO’s “Game of Thrones.” The shop will transform into a banqueting hall at King’s Landing, and of course, you can expect themed cupcakes: the White Walker, the Mother of Dragons, the Red Wedding, the Jon Snow, Pigeon Pie and Grayscale. But you might also want to drop by for its unhappy night with trivia and “Game of Thrones” beer from Ommegang Brewery or the “Feast for Crows” banquet with honey-chicken drumsticks, meat pies, and cheese and onion tarts. carytowncupcakes.com.