Comedian Pauly Shore is still grinding it out in clubs but he’s learned to appreciate the moment. 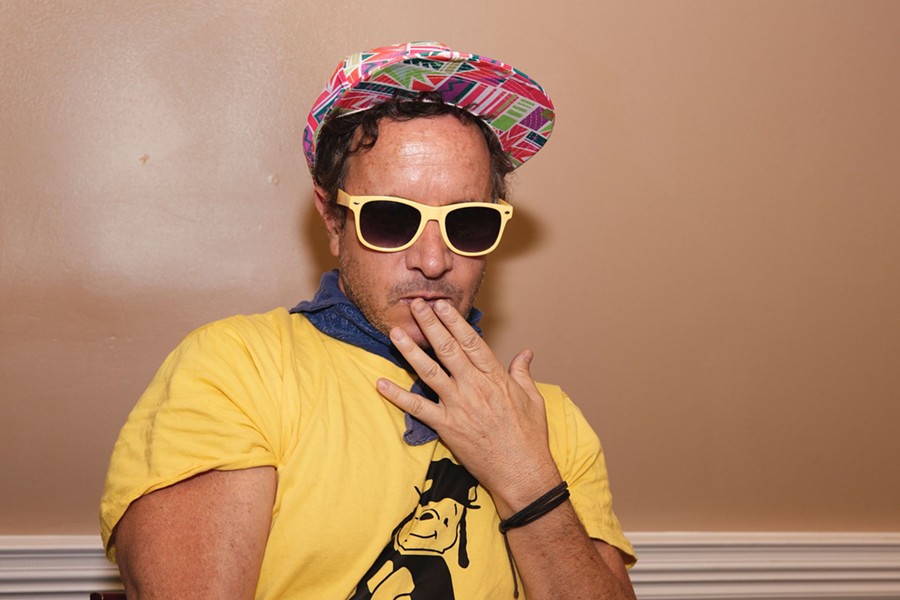 Before last week, I had never watched a Pauly Shore movie.

When I finally did, it wasn't a fan favorite like "Encino Man" or "Bio-Dome" (I tried but couldn't make it all the way through). Instead it was a sad little documentary, "Pauly Stands Alone," from 2014. The movie follows Shore's life as a working comedian around small Wisconsin towns, where he basks in the adulation of his hardcore fans, tries to have sex with various people, including promoters, and deals by phone with his ailing mother, Mitzi Shore, a comedy legend who died last year after a bout with Parkinson's.

Mitzi was the founder of the Comedy Store in Los Angeles where she helped launch the careers of big-time stars such as Richard Pryor, Robin Williams, David Letterman, Jay Leno and Sam Kinison, among many other names you'd likely recognize.

Her son Pauly grew up around all that talent and craziness, so becoming a stand-up comedian seemed like his destiny. He got his chance to shine after being hired as an MTV VJ in 1989, one of the first hosts to take cameras on location. Mostly, he was known for the surfery dudespeak of his character, the Weasel, a kind of Valley-boy stoner with lines such as "Hey, buuu-dy!" and "ma-jor greasy melons, bro."

After a string of forgettable B-comedy movies and one of the worst sitcoms in Fox Television history, "Pauly," which was cancelled after five episodes, the times changed and Shore fell off the pop culture map. Except he didn't disappear. He's always been around, performing stand-up and making his nostalgic MTV fans happy.

Style caught up with him for a brief 10-minute phone interview, which ended quickly because Shore said he was late for a plane flight.

Pauly Shore: Well, I've been doing comedy for a while. I do my own material, crowd work. My job is kind of like a doctor's -- to operate properly. To operate on the crowd and make sure everyone forgets about any of the issues in their life. Just kind of have a really good time. That's my style. Party, good times. That's my mission.

Watching your recent stand-up, it seems like it's not so much the Weasel character that's holding you back, it's the cultural milieu of the early '90s — the whole cheap sex with groupies, '80s hair metal-thing. What's been the biggest challenge in finding new fans?

I don't know, dude. That's a good question. You do what you do and if people think it's funny they like it, if they don't, they don't. There are so many more channels these days than there were when I was coming out. So there's a lot more opportunity for randoms to get their stuff out there, which is good and bad. It's good because everyone gets a shot, but it's bad because it crowds the playing field.

But you gotta go with the times. For me, I spent a lot of time trying to figure out how to shoot a podcast. To get it out there visually. About three months ago, I started doing it out of my apartment. It's called Random Rants with Pauly Shore and it's on YouTube. If you look at it, you can see me just going off on everything, really.

Still I imagine a lot of your bro-ey stuff feels dated, especially for millennials. Do you make any concessions for today's politically correct standards?

Well, I think that's how [millennials] act, but behind closed doors they're human beings. It's kind of like going to church, you know, everyone puts on a face. But I think they like to do crazy stuff, too. I'm a very un-PC comic — that's my style. If you like it, cool, if you don't, cool. You're not going to appeal to everyone, anyway. You do what you can, yeah?

Did you ever see that Showtime drama, "I'm Dying Up Here"?

Yeah, some of it. It's hard for me to be a judge because it was loosely based on my mom and the Store, so for me, I look at it as two people: As a person who's like, "Hey is this a cool show?" Then I look at it as: Are they telling the truth, what are they trying to do about my mom? I didn't really like the show. I thought it was kinda phony, kind of a caricature of that kind of thing. I couldn't watch it because of how they portrayed my mom, it wasn't the truth, you know?

Are you working on your own historical documentary of your life?

Yeah, of course. I'm about to make a deal with a pretty big company and we're going to go off and try to license it or sell it in the next year or so.

Any other future projects worth mentioning?

My podcast and touring right now. … But I have a movie called "Guest House" that I starred in that will be out next year. It's a comedy rated R, where I play a guy that won't leave out of a guesthouse. I'm pretty excited about it.

I read that your mentor, Sam Kinison, used to snort fat rails off your forehead when you were a kid. How did you manage to grow up around him, Richard Pryor, Robin Williams, and escape the pitfalls of hard drugs?

I think in life you have to make choices. Being around a bunch of knuckleheaded, drug-addict comedians was the best thing, really. You can watch what not to do. You're like, "Oh shit, they're fucked up." That's the best teacher in the world. With Sam, he was a great person but he definitely got caught up in the drug thing. I have this thing I came up with a while ago: Dance with the devil, don't become the devil. Meaning it's OK to party, but don't become the party. And that's what he did. He was always going, going, going. I didn't like that. I went crazy with him but not all the way to the end.

In the documentary, "Pauly Stands Alone," you're on a stand-up tour of small towns. And you're asking everyone for advice about your love life, like should you get married, have kids, etc. Has anything changed for you since then?

Well, it's a very peculiar role I've put myself in. When it comes to settling down and having a family, it's very difficult. Number one, I'm always touring, that's not appealing to a female. Number two, I'm 51 and women like younger guys. And number three, I'm famous. So those are like three strikes, you know what I mean?

Some women as they get older, their standards change too after awhile. They're like, "I got a lot of baggage, too" you know? Like, beggars can't be choosers. At the end of the day, you have to be friends with that person and get along.

In life, you can't have everything. You have to appreciate what you do have. I appreciate that I'm healthy, that I don't have cancer.

That's a mature take. Though you should probably not put so much baby powder on your balls anymore [a running gag in the documentary]. Seriously, Google the safety concerns with talcum powder.