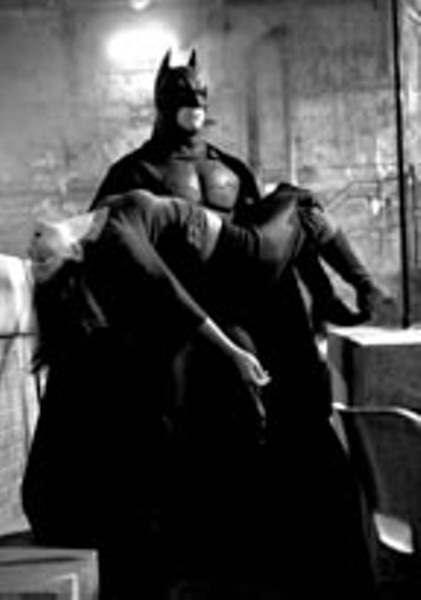 As the title suggests, "Batman Begins" presents itself as the prequel to the other Batman movies. There was evil in the world, we learn, before the Joker brought Gotham to its knees. We're taken back to the murders that scarred Bruce Wayne's boyhood, then whisked off to a Himalayan fortress where Wayne (Christian Bale), now a young man, is trained in the ways of the Ninja by a vigilante squad led by Liam Neeson.

It's at this point that you begin to suspect the story has an air of the haphazard about it. Ninjas? Before long, a double handful of current events and traditional Hollywood boogeymen are thrown into the unpalatable narrative stew: corporate greed, drug trafficking, governments unwilling to pay for soldiers' armor, sadistic psychiatrists and even the virtues of mass transit. It's as if the writers had broken into a scenario warehouse and made off with whatever items happened to be sitting on the nearest shelf.

After much unnecessary padding and delay, the film settles down to its central story line, which turns out to be a thinly veiled and thoroughly trivialized reworking of 9/11. Neeson's Ninjas (who style themselves the League of Shadows) turn out to be a really bad bunch. They set out from the mountain hideaway in the East, determined to destroy Gotham because of its seething decadence and manifold wickedness. Their plan even involves hurtling a very large engine of death at a skyscraper that is the symbolic heart of the city. Sound familiar? What's disheartening about this fictional appropriation of real horrors is its pointlessness. There's no message here, just another attempt to jump-start a creaky narrative mechanism with novel material, however gruesome.

Through it all, Bruce Wayne struggles to carve out a role as defender of right and to master his own demons while wrangling with manufacturers over the specifications of his custom headpieces. Christian Bale in some ways seems precisely tailored to the part. Egregiously handsome, Bale nevertheless exudes an air of indefinable menace, as if he were cloaking an imperfectly controlled combustibility with all the dissembled nonchalance at his disposal.

These were the qualities that suited him to his previous title role in "American Psycho," and they could have served him well here, were it not for the rigorously tedious lines that he and his fellow actors are forced to deliver. Nolan and David S. Goyer have devised dialogue as stilted and sclerotic as anything you'll find in the bloated Roman and Bible pictures that poured from the studios in the '50s and '60s. This is a film in which actors pause to say harsh, bold things while beating each other silly under windswept Tibetan skies. We learn that "anger outweighs guilt," that "anger gives strength," that "justice is about harmony," and much, much more. After a while, the words become almost meaningless, just an accompaniment to the deep, throbbing score. Given the state of the script, it's impossible to care about Wayne's troubled relations with his love (Katie Holmes), which, in any case, are treated in the film like an afterthought.

There's some mouthing off in "Batman Begins" about how the rich squander their resources on frivolities, but a production that shells out for Michael Caine to play Alfred, the butler, without giving him anything of substance to do is in no position to carp. The efforts of Morgan Freeman, Gary Oldman (as Sergeant-not-yet-Commissioner Gordon) and the fine Tom Wilkinson ("Shakespeare in Love," "The Full Monty") likewise go mostly to waste. This bat also likes the night, but it is easily lost in the darkness. (PG-13) ** S