A VCU teacher has students redesign Virginia flags to “reckon with dead symbols.” 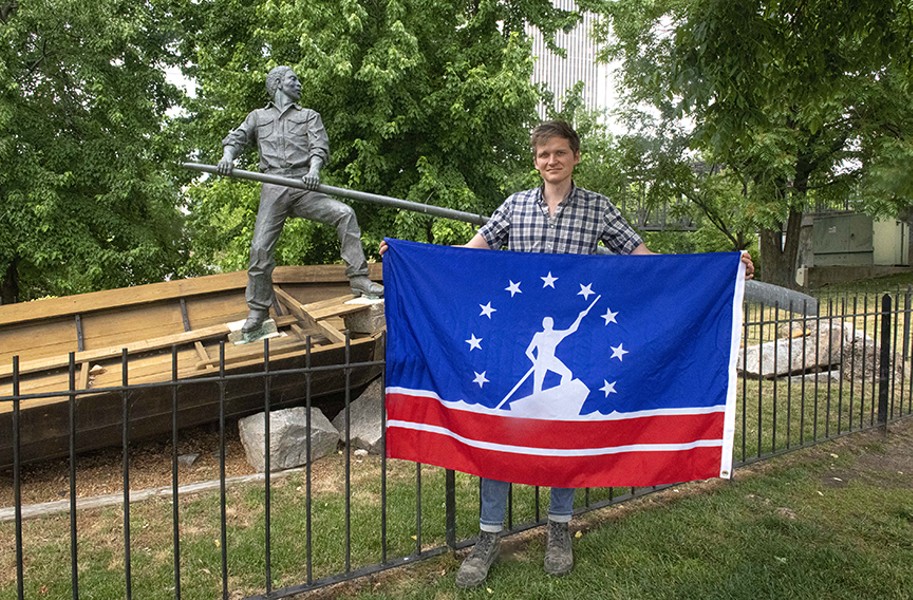 Scott Elmquist VCU adjunct professor Barry O'Keefe holds up a Richmond city flag redesigned in 1993 to celebrate “anonymous laborers of all races who built the city,” which he recently used as a model for his class.

An adjunct professor in Virginia Commonwealth University’s art foundations and communication arts department, Barry O’Keefe takes issue with the way so much assigned classwork dies in the classroom. Instead, he set out to engage students in his design class by putting their skills to work in redesigning 16 local flags across Virginia.

“We’re reckoning with dead symbols in America and in Virginia right now,” he says. “This was a way to involve students in that reckoning.”

Inspired by an episode of the popular design podcast “99 Percent Invisible,” which explored how many local U.S. flag designs fail to fulfill a flag’s design functions, each student was asked to redesign a flag. Because many localities’ flags are bureaucratic creations, they often feature tiny text and complex illustrations that are difficult to reproduce and impossible to read from a distance. Not surprisingly, many Virginia flags also feature racial caricatures or include historical references that don’t represent an inclusive and equitable society.

Richmond’s flag started out as a mash-up of Confederate symbols until a remarkably successful redesign in 1993 accomplished everything a flag should, according to the North American Vexillological Association, whose work the students studied for the project. The redesigned flag is an iconic, easily reproducible design with a limited color palette, meaningful symbolism and no text. At the standard size and distance from viewers, most flags appear about as large as 1-inch-by-1.5-inch rectangles would at arm’s length, so simplicity and legibility really matter.

“It’s simple and clear and it also replaces a confrontationally racist flag with a celebration of the anonymous laborers of all races who built the city,” O’Keefe says of the flag’s boatman figure, similar to Paul di Pasquale’s sculpture “Headman” on Brown’s Island. “It’s ahead of its time in uplifting the anonymous everyman as a central symbol and the Vexillological Association ranked it their No. 15 flag in the country.”

Students were encouraged to pick their hometown flags, which for Lindsey Crabtree meant Henrico County’s flag featuring the seal with Pocahontas’ face in the center.

“I had a pretty bad experience with their schools,” Crabtree recalls of her high school, which had an American native as a mascot called a “warrior” – as did her elementary school. “So, I wasn’t surprised at the appropriation of Pocahontas, but I envisioned a less misleading flag that didn’t glorify Henrico, but also didn’t cause any more damage or insult.”

In her finished version, she used a less jarring green to represent agriculture with a tobacco flower in the center with five petals to mimic a star as a symbol of Henricus’ success in tobacco cultivation. The star as a shape was inspired by the Powhatan flag, which has a red teardrop shape. “The red star is a remnant of the mistreatment of the Powhatan tribe that used to live here,” she says. “The blue in the center represents the James River and also the relationship Henricus had with Jamestown.”

Despite being a Winchester native, Matthew Bennett discovered that its scarlet background with the beige X shape on the flag was meant to resemble the Confederate flag. He was more disappointed than shocked because he knew how extensive Winchester’s Civil War history is and how passionately many residents defend the Confederate flag.

“What I found surprising was just the fact that the flag had essentially never been updated or changed given how Winchester has been growing and undergoing a lot of renovations within the last few years,” he says. “I would’ve thought they’d reconsider the flag by now.”

His redesign keeps the red, white and blue color palette but features an apple blossom placed on a red circle, centered on a white flag. The red circle symbolizes apples, an important cash crop to the town, and the bloom represents the annual Apple Blossom Festival. The two blue triangles are meant to resemble a mountain valley, specifically the Shenandoah Valley, Winchester’s location. 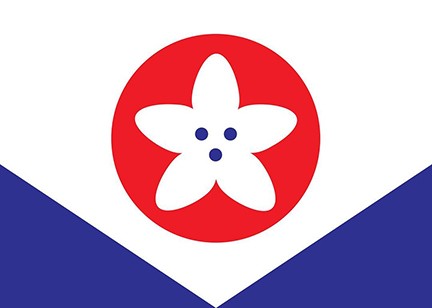 And don’t get Crabtree and Bennett started on the design of Virginia’s state flag, which they agree breaks nearly every design rule.

“Flags shouldn’t have to write out the name of the place represented, it should do that by imagery and design alone,” Bennett insists, questioning why Virginia hasn’t put more effort into creating a well-designed flag. “Good flag designs are a source of civic pride and revenue and deserve to be given more attention and care.”

A logical next step, according to O’Keefe, would be public discussions and conversations as a way of processing history and working together to create new interpretations. He says it’s important that ultimately designers be given power to make bold decisions without endless revisions or unending public critique. “These students were able to accomplish in four weeks what would take a flag design committee months or years,” O’Keefe says. “Their solutions didn’t have to survive popularity contest after popularity contest in a board room, and I think as a result they’re bolder than most flag designs are allowed to be.”

The public can decide for itself at the Instagram account the class created to share its designs. Local flag designs are used by local government, businesses and private residents: They’re intended to be symbols that bring a community together. “Flag redesigns are a way to grapple with and reappraise local history and build new, stronger shared identities,” says O’Keefe, asserting that the carefully researched and elegantly designed flags produced by the students offer a great starting point for that work.

“Flag redesign efforts can be a way to grapple with history and build shared identity,” he explains. “Lord knows, we need that now.”