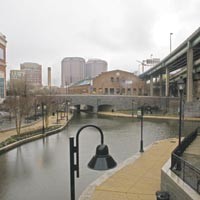 Theories about the untimely demise of Toad's Place — just days before rap star Busta Rhymes was scheduled to perform — were everywhere last week. Was it competition from the National, poor management, that fight at the club a month earlier that initiated a response from the mayor?

But lost in the discussion is a bigger, perhaps more perplexing issue for city and civic leaders: Ten years since the $52 million Canal Walk was constructed, what happened to the promise of a bustling entertainment and retail district along the river?

In 1999, it was difficult to argue with the logic of investing federal and state tax dollars to create the Canal Walk. Restaurants would open with waterfront views, destination retailers would open boutique shops, tourists would flock to the city. When Toad's Place opened in 2006 after years of fits and starts, the club was hailed as the key that would finally jumpstart the mile-and-a-quarter stretch of landscaped walkways from Fifth Street to Shockoe Bottom.

Perhaps the public has expected too much too quickly, but few people would have predicated that a decade later, the Canal Walk's signature venue would be padlocked and shut down — and the sidewalks devoid of tourists and shoppers.

The Canal Walk project grew out of a joint effort between the city and downtown corporations such as Dominion Resources and Norfolk Southern. The city spent $40 million to build the canal and public infrastructure and received $6 million from the state and a $2 million federal grant. Dominion, Norfolk Southern and others donated $4 million worth of real estate to the city, including Brown's Island, and have voluntarily paid higher taxes on the adjoining properties to pay for its private maintenance. Condo towers and some retail development have taken root along the banks, but the manicured footpaths conspicuously lack feet.

One of last week's radiant spring afternoons, with temperatures in the upper 70s and a balmy breeze running through, one jogger, one cyclist, one exhausted couple towing a baby and two Canadian geese assaulting the turf where the only people seen enjoying, or digesting, the Canal Walk.

Andy Thornton, who settled his high-end furniture store, La DiffAcrence, a block off the Canal before it was even built, gives the Canal Walk high marks.

“The area is phenomenal,” he says. “We get tourists from out of town and they just rave about it, so it's got good bones, we just need to build on it.”

Thornton says condo development from Rocketts Landing in the east to the 18-story Vistas on the James across the street puts riverfront expansion “beyond the point of no return. It's going to happen, but in typical Richmond fashion, it's going slower than we would like.”

It doesn't help that Vistas, like Toad's, is trying to get its footing in perhaps the worst economic crisis in 70 years. At Vistas on the James and the Riverfront Towers on Brown's Island, the condos were all sold, but many of the units remain vacant. At Vistas, the first-floor retail spaces also remain unleased.

Brenton S. Halsey has helped guide the project since its inception, and for the past 10 years headed the Richmond Historic Riverfront Foundation, a nonprofit that raises money to assist the Canal Walk's development.

“The progress has been slow but overall I'd say it's about on course and its usage has been gradually increasing,” he says. “We always said that our expectation was that the commercial development on the canal would take about 15 years to fully build out, and actually there are very few sites left.”

There is broad consensus that one of those remaining sites has interrupted the flow along the path. The Reynolds Consumer Products industrial plant spans both sides of the Canal Walk, forcing the footpaths to contort into a ball of stairs and bridges around it. Visitors navigating the area on street level must contend with similar roadblocks and dead ends.

Reynolds announced in September that it expects to close the plant this summer, ultimately opening up the property for redevelopment. It may take longer to redevelop because of the economic climate, but many observers say opening the Reynolds site is the critical piece of the puzzle.

“From a canal point of view as far as development, it's a great opportunity,” says Mark Merhige, a downtown developer and chairman of the riverfront committee that oversees canal maintenance and development. The group operated independently as the Richmond Riverfront Development Corp. until three years ago when it folded in with Richmond Renaissance to form megadowntown booster group, Venture Richmond.

“I'm sorry it's happening while we're in a ditch,” he says of the Reynolds closing, “but we can finally make the linear connection from east to west, from Shockoe Bottom to Tredegar [Iron Works].”

The prospect of a continuous path comes at a fortuitous time. Rachel Flynn, Richmond's community development director, is pushing to implement an extension of the riverfront walkways from the eastern end of the Canal Walk, which drops off at 17th Street in Shockoe Bottom.

“We need to do our part to keep going east which is what the master plan is all about,” Flynn says. “Restore the section of the canal that has not been upgraded that follows along Tobacco Row, connect Echo Harbor to Lehigh to the Intermediate Terminal to Rocketts Landing, and then you've really got something going there.”

Greg Wells, local historian and civic activist, says he hopes future development along the canal focuses more on drawing out people than dollars.

“The city has a long history of trying to think a homerun will bring back downtown — 6th Street Marketplace, the convention center — ever since white flight,” he says. Wells has watched his hometown of Louisville, Ky., wrestle with a similar challenge reclaiming the Ohio River waterfront from industrial decay. He prefers that city's approach of providing more free amenities such as playgrounds, water parks for children and picnic areas.

“Just thinking they can solve the whole issue strictly from a financial point of view is a real disappointment,” he says.

While Louisville may provide an instructive parallel, it's San Antonio, Texas, to which canal developers most often turn. The city's cafAc-lined river walk was, in part, the inspiration for Richmond's Canal Walk. Jack Berry, executive director of Venture Richmond, says using San Antonio as a model, Richmond's Canal Walk is making progress a decade later.

“Retail follows rooftops. You can't force retail where there's not sufficient demand,” he says. “But we're creating demand.” He points to the 168 units in Vistas on the James, 8,000 downtown residents, and the canal boat cruises that Venture Richmond manages. Last year, the cruises set a record for ridership with 14,807 tickets sold, and of the 153 privately chartered trips, local schools booked the majority.

“I'd call it a stunning success that has brought vitality to the riverfront,” he says. “Recognizing that it took San Antonio 30 years to develop their river walk, we're in the early phases. It could take another 20 years to fully develop.” S