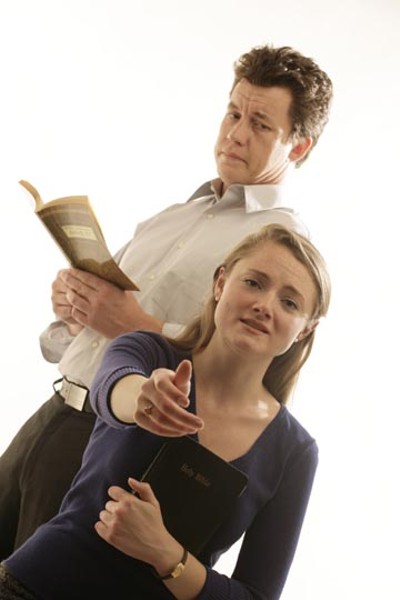 One argument put forward in favor of organized religion is that it provides a framework to discuss the bigger questions of life.

Why are we here? How do we find meaning in life? What is our purpose? These are the type of questions plaguing the character Jake in "H20," a drama that keeps its audience laughing as it delves into the darker aspects of human existence. Staged by Carol Piersol's newly-formed 5th Wall Theatre, the play sets a high watermark for the company's upcoming work.

Jake (Landon Nagel) is the star of a series of action films vaguely reminiscent of "The Transporter." To prove that he's more than just his hunky onscreen persona — and to stave off depression — Jake has decided to star in "Hamlet" on Broadway. He's in the midst of pre-production when he crosses paths with evangelical Deborah (Liz Earnest) and becomes determined to cast her as his Ophelia.

In its second-ever production, Jane Martin's script plays with the Hamlet-Ophelia connection, but is careful not to overextend the comparison. Under director Morrie Piersol's steady hand, the show is entrancing and brutal, deftly jumping from pain to humor and back again.

With his Everyman face and obvious charm, Nagel puts in an effortless performance as Jake. As his character spirals out of control under the weight of depression and fame, Nagel portrays Jake as a wounded joker with an unhappy streak.

Afraid of the darkness in his own soul, Jake clings to Deborah, who believes God has called upon her to spread the gospel by playing Shakespearean roles. Headstrong but uncertain of how to help Jake through her faith, Deborah is confronted with challenges to teachings she has believed her whole life. In the hands of a lesser actress, the role could easily be seen as supporting and one-dimensional, but Earnest works to show the character's complexity.

With no intermission, the show clocks in around 90 minutes, and stage manager Georgina Coffey and her crew should be lauded for their lightning fast scene and costume changes. Tennessee Dixon's set is versatile to the show's many locations, and Matthew Landwehr's moody lighting design only heightens the action on stage.

Powerful and ultimately devastating, "H20" shows its protagonists intertwined in a love-hate relationship that leaves the audience with more questions than answers.

Locked in orbit like binary stars, it's riveting and scary to see if Jake and Deborah will shoot off in different directions or cause each other's destruction. S