Richmond artists join a statewide environmental collective to create an anthem for the No Pipeline movement. 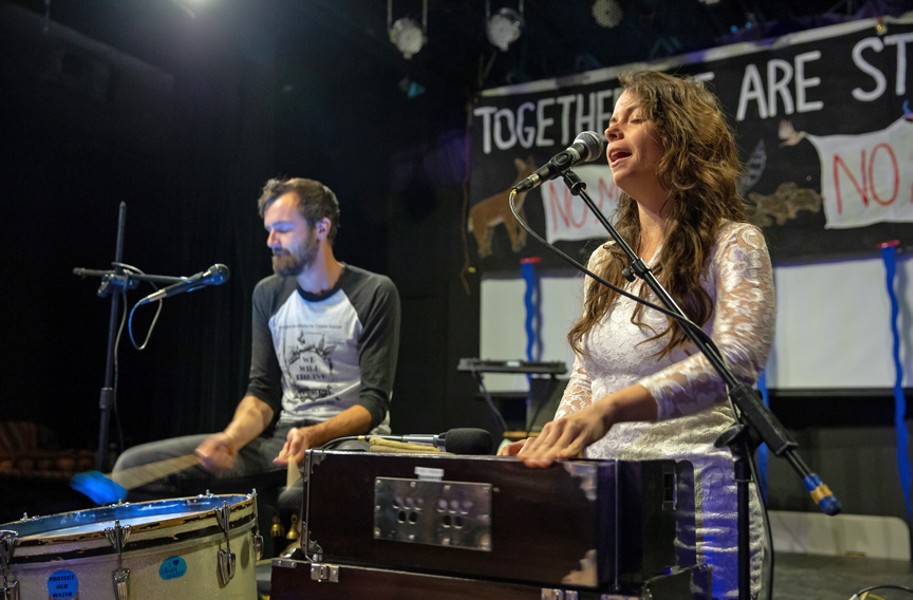 Parker Michels-Boyce Jameson Price and Laney Sullivan of Lobo Marino perform at the Celebrate Water and Life concert and fundraiser in Charlottesville on March 21. They’ll be back there for another big environmental awareness concert at the Jefferson Theater on Friday, April 26. Each member of the Sun Sing collective has chosen to sing for a particular creature endangered by proposed pipelines.

In the 1960s, many artists thought that music, rather than simply providing a soundtrack to revolution, could change the world.

Some Richmond musicians still hold similar beliefs. And with much of the world's scientific community agreeing that future climate change threatens civilization as we know it, the stakes feel considerably higher.

Musician and environmental activist Laney Sullivan, known for her lovely singing in the worldly folk-pop duo Lobo Marino, is joining with Lily Lamberta of All the Saints Theater Company as part of an anti-pipeline video that will premiere at a big theatrical concert, Sun Sing, at the Jefferson Theater in Charlottesville on April 26. They›ll join a collective of musicians from around the state performing original music specifically for the pro-clean water project.

Sullivan contributed to the video, "To the River," filmed along the routes of the Atlantic Coast Pipeline and Mountain Valley Pipeline, using a big cargo Sun Bus powered by mounted solar panels. The bus is equipped with a PA system and recording capability that has previously been used playing music to support tree-sitting activists and during protests in downtown Richmond.

The video series, Who Will Sing for Us, and concert were spearheaded by Kay Ferguson, the Charlottesville-based director of the coalition Water Is Life, Protect It, and founder of Artivism Virginia, which uses the arts to educate the public while connecting activists and like-minded artists.

"Together, the ACP and MVP [pipelines] will more than double the greenhouse gas emissions for Virginia," Ferguson says. "These are complicated issues and what we're trying to do is translate. Our motto is first the heart, then the hands, then the feet. … But we want to keep it positive. The arts know how to do that."

A well-known local activist, Sullivan's meditative work has typically been about watershed awareness, realizing where our water comes from — and she sees a looming catastrophe for the James River.

"Richmond would be impacted from these big infrastructure projects because they would horizontally drill under the James, crossing rivers that feed into the James, like the Cowpasture River, many times," she says, noting safety concerns from leakage and spills. "I always start from my own body. And I don't consent to being poisoned."

Another new song by Lobo Marino for the concert, "Don't Steal the Land," is about respecting the autonomy of our rivers, she says.

"It's our own human fallacy that we think we can own land and do whatever we want to it. It's all interrelated to colonialism, imperialism and domination of the Earth," she explains. "You can't be born and just live anymore, you have to participate in this really fucked-up system just to have a place to drink water and lay your head."

While Republicans' record of anti-environmental stances speaks for itself, Sullivan says that many of the collective's members feel that the Democratic Party too, though it talks an environmental game, is dominated by a corporate mindset.

She points to instances when Gov. Ralph Northam took people off the Air Pollution Control Board, and when he created a council on Environmental Justice, but ignored its report.

In December 2017, the statewide community of environmentalists held a well-attended concert and rally at the National. Ferguson says that it's past time for another uplifting concert, especially for those traumatized by land seizures.

"We have to clean up and reclaim the Democratic Party," she insists. "Really watch those primaries, the number of people who actually select candidates is so small."

Over the past few years, Ferguson says, awareness of water issues has more than doubled. Her goal: getting more people to show up.

Sullivan points to past successes as inspiration, such as public opposition to the untreated coal ash wastewater dumping in the James River.

"There's a lot of power in the consciousness of the people changing," she says. "We want it to become less popular for political candidates to do the wrong thing."

The Sun Sing concert will be held on Friday, April 26, at the Jefferson Theater in Charlottesville. Doors open at 5 p.m. and the show starts at 6 p.m. Admission is $12 in advance and $13 day of show. Check out the Facebook page for Water Is Life. Protect It.