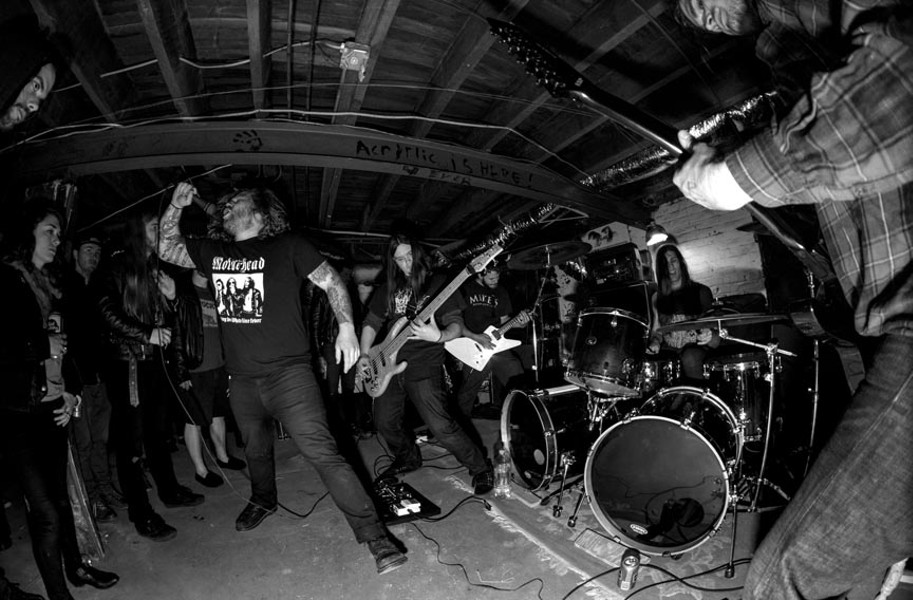 It’s unlikely that people will mistake the lyrical conceit of any metal track with some refined literary statement. But the genre in all its iterations has taken on some fairly definitive tropes, stretching way back to Michael Moorcock defining space travel for Hawkwind.

While Left Cross isn’t necessarily of that ilk, its members retain a reverence for earlier acts’ sci-fi affinities, mixing in observations on the brutality of warfare.

“It’d be weird for bands playing an aggressive type of music to sing about the same stuff that Crass sings about,” says the group’s singer, Wes Warren. “Metal’s a fantasy-driven genre.”

As for the settings in his songs, he says: “I’ve been interested in history and military subjects for a long time, as well as high fantasy like ‘Sword and Sorcery.’ So, it’s natural for me to write this stuff.”

With the release of “Infernal Assault,” Left Cross purées wartime imagery, death-metal moves and punk’s pacings into a concise set, filling a crossover void perceived by its members.

“What we wanted to do was start a band that would play metal shows that punk kids would like,” drummer Scott Bartley says. “I’ve always floated between scenes. I love the metal scene, but a lot of it doesn’t have the same aggression as punk does; that anger and raw feeling.”

In the interest of bridging the divide, Left Cross, whose members have done time in a raft of other Richmond bands, such as Unsacred and Unholy Thoughts, enlisted Barge’s Bob Quirk to assist in recording.

“He and I have been friends for a really long time,” Bartley says, before reeling off a list of other acts that Quirk’s worked with. “Left Cross and Unsacred are probably the most metal bands he’s messed with. He’s not very overbearing, but he can push us.”

Quirk echoes the drummer’s sentiments while taking a brief reprieve from lugging gear around before a performance. “They definitely tie a lot of scenes together … and they’re all great musicians,” he says. “It’s not traditional metal.”

Though the concept of crossover’s been kicking around since before DRI’s 1982 demo, Bartley’s keenly aware that shifting between metal subgenres while performing in multiple bands could offer some sameness, voiding his roles in separate ensembles.

“I really try to make sure that they’re not related at all,” he says. “Apart from having the punk tinge, I wanted Left Cross to just be a primitive death-metal band.”

Recently, the band, which also includes Seth Anderson and Jerret Clark on guitars as well as bassist Dylan Williams, set down seven new tracks, anticipating a slew of releases. But despite all the studio time, no one seems too eager to hop in a van.

“I don’t think we have any aspirations other than to do what we want to do,” Warren says. “It sounds really contrived — but there’s no agenda to go off and tour the world. We’re just trying to play what we want to play and not worry about what that other stuff entails.”

Left Cross performs May 14 at Strange Matter with Skullshitter, Necrot and Bastard Sapling.