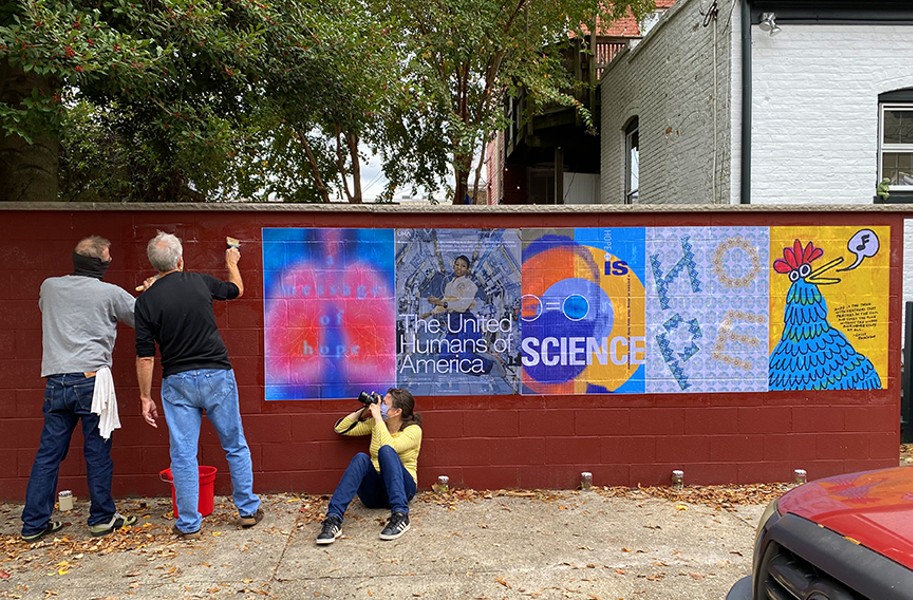 Starting in the 19th century, posters advertising circus shows began to be hung on walls with paste made from wheat as a way of getting the word out about upcoming extravaganzas.

When it came to alcohol and nightclub advertising, Henri de Toulouse-Lautrec’s posters were so popular by the 1890s that instructions were published on how to peel down the pasted posters without damaging them so they might be rehung.

Today, activists and subculture denizens continue to use wheat paste to post advertising, propaganda and art. A year and a half ago, Ashley Kistler, curator and former director of Virginia Commonwealth University’s Anderson Gallery, was doing a studio visit with John Malinoski, professor of communications design at the university from 1989 through 2016, hoping to talk him into a retrospective of his work. Instead, he showed her a mock-up of a wheat-paste-based project on the theme of hope, a project that had no site. Kistler, a Fan resident, told him that if he couldn’t find somewhere to execute it, he was welcome to use the cinder block wall that lines her backyard.

“I’d just had the wall redone, making it a perfect picture surface,” she recalls and the seeds for the Hope Wall were planted.

Upon hearing of the project, Rob Carter, professor emeritus of typography and graphic design at VCU, advocated for a more ambitious project. He suggested to Malinoski that they each design a poster on the theme of hope and its many facets – political, pandemic, race relations – as well as each find a designer to create a work for the wall. There would be a documentary of the Hope Wall process and a book would be the final result. He insisted that the project needed to last at least a year but Malinoski qualified that: “It will continue as long as it’s still fun,” he insists.

The three kicked off the public art project in early September and plan to continue it well into 2021. The fourth round of nine posters went up in mid-November at Grove and Shields near Joe’s Inn. Contributors include designers and artists from throughout the U.S. and beyond, responding to the theme of hope in myriad ways.

Make no mistake, this project is strictly do-it-yourself. Malinoski cooks up the wheat paste in his kitchen, making a point to use different flours from places as far-flung as Poland and Russia. He’s considering flour shopping at popular Asian grocery Tan-A Supermarket next to keep up the global representation. Because it’s such a simple recipe with basic ingredients, it’s inexpensive to make. The challenge is that wheat paste only holds up for about four months, with rain and mold growth likely speeding up the deterioration. The group deals with this by stripping the wall and putting up new posters every three weeks, spending a fair amount of time deciding what sequence to place the posters in so that each poster shines both individually and as part of the greater whole of the wall.

“Hope comes from different parts of the country and the world,” he explains. “Ideas of hope are so different from person to person and poster to poster.” Kistler agrees, citing the passionate protests and demands for systemic change that have been transforming Richmond since early summer as well as the tragic consequences of the pandemic for making such a do-it-yourself medium once again appropriate as a vehicle for hope.

It’s telling that very few artists asked for a poster have turned them down. Both Carter and Malinoski have a global network of designers they’ve been able to tap into for poster-making, but there’s also strong representation from Richmond. As the project got rolling, some artists became so enthusiastic that they submitted multiple posters when asked to submit one. Carter says if they accumulate a glut of posters, they may start changing them out every two weeks instead. “I’ve become reacquainted with many former students and they’re now all over the place, as diverse as VCU,” Malinoski says. “But I also go after international poster makers I see online as a way to open this up to the greater community.”

And while poster culture is huge in Europe and bigger cities such as Chicago, Los Angeles and New York, Richmond tends to be more of a graffiti and mural town. Kistler’s home office overlooks the Hope Wall, allowing her to watch people’s reactions to it.

“Some go by slowly and take a picture of it, others walk by and don’t seem to even notice it,” she says. “John and Rob and I have a compulsion to add to the community conversation, so this feels like a helpful thing to do.”

But at its core, the Hope Wall is about humanity.

“Wheat is basic nourishment for humankind,” Carter says. “Wheat pasted posters are the basis for nourishing the soul and spirit.”

The Hope Wall is at Grove and Shields avenues and on Instagram.