He survived being abandoned in a Richmond housing project. Now Chad L. Coleman tackles the zombies of “The Walking Dead.” 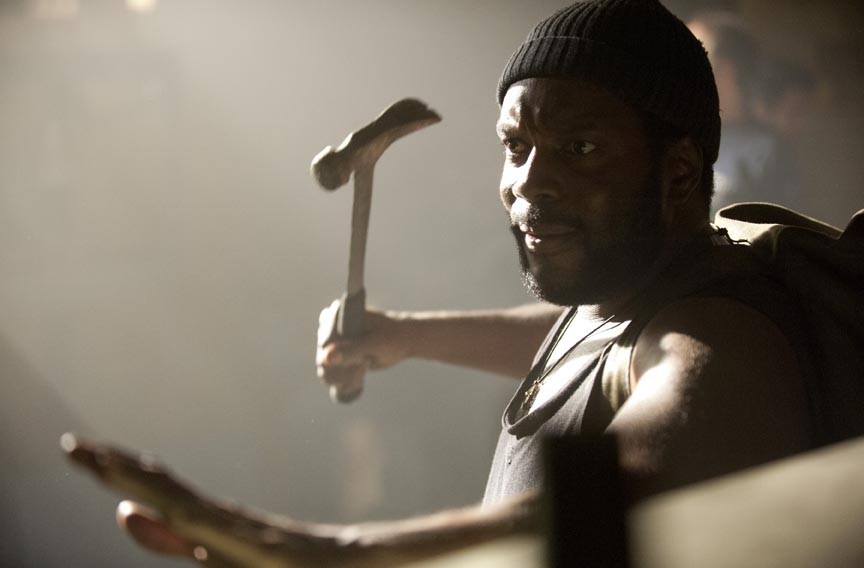 Killing zombies is one thing, but try eating lunch next to one.

“Dude, the makeup is so scary, you don’t have to act. When you look at those people it is the scariest mess you ever wanted to see,” says Richmond native Chad L. Coleman, who joined the cast of AMC’s wildly popular zombie drama “The Walking Dead” in the show’s Dec. 2 episode. “The real bizarre thing is when they’re acting normal. … When we go to get something to eat and they’re still in makeup doing normal stuff like, ‘Hmmm, what salad dressing am I going to use?’”

Coleman, 46, is best known for his role as struggling reformed drug slinger Dennis “Cutty” Wise on HBO’s acclaimed inner-city drama “The Wire.” His new character on “The Walking Dead,” retired NFL football player Tyreese, was a fan favorite in the comic books upon which the show is based and is expected to be a major player on the series, which returned from its midseason break Feb. 10.

While the two characters initially don’t seem to have much in common, they’re both survivors: Tyreese in a post-apocalyptic hellscape, and Cutty on the lethal streets of Baltimore. “It’s just the idea of who are you really in this world,” says Coleman, speaking by phone from Los Angeles. “When your back is against the wall, what type of man would you choose to be? There’s some similarities there, I think.”

An accomplished actor with a 20-year career on stage and television, Coleman has worked beside luminaries such as Bill Cosby, Dan Aykroyd and Patrick Stewart. He

performed on Broadway for President Barack Obama and the first lady. But his origins are much humbler.

When he was an 11-month-old infant, Coleman’s parents abandoned him and his four siblings, ages 3 to 7, in their apartment in the East End’s Creighton Court housing project, a tough neighborhood plagued by drugs and violence. “We don’t know how long our parents were absent,” he says. “I heard stories that I had maggots eating at my backside … because nobody changed my diaper.”

The situation was discovered after his eldest brother, Donald (now a Richmond School Board member), accidentally set the apartment on fire while trying to cook an egg for his siblings. The children became wards of the state; Coleman’s mother ran to Washington to avoid prosecution.

Years later, as an adult, Coleman reconciled with his mother, a relationship that shaped his performance on “The Wire.” “My mother redeemed herself. She was so sorrowful about everything that happened,” Coleman says. “That’s why I liked playing Cutty. That’s why redemption and forgiveness are so huge with me.”

The Coleman children were raised by foster parents George and Lottie Byrd in their home on North 35th Street. “They instilled values in us, character and Christianity. We had to do Bible studies in the front of the house once a week,” Coleman recalls. “You were not going to be disrespectful. You were going to be a good kid — you had to be.”

As a student at John F. Kennedy High School, Coleman developed an interest in acting after a bum leg prevented him from continuing to run cross country and track. He starting acting in the All City Theatrical Troupe, an after-school program for high-school students run by drama teacher Robert Pemberton.

After graduating high school in 1984, Coleman attended a year of theater school at Virginia Commonwealth University, but bored with the pace of his studies, he joined the Army and served four years as a videographer, shooting public service announcements and music videos and performing voice-over work.

Coleman later moved to New York to pursue his acting career. One of his first gigs was working as a behind-the-scenes technical stand-in on “The Cosby Show.” While it was a tough job, he says, “I was right there with Bill Cosby.” On the set he befriended actor Malcolm-Jamal Warner, on whose short-lived NBC sitcom, “Here and Now,” he later appeared.

Perhaps surprisingly to his “Wire” fans, Coleman is a versatile actor who enjoys doing comedy. His acting credits include a two-year stint on the Fox sitcom “I Hate My Teenage Daughter” and an appearance on Aykroyd’s 1990s ABC series “Soul Man.” He turned down a recent role on NBC’s “Community” because it was too small.

“I’ve gone from Shakespeare to sitcoms,” Coleman says. “Because my calling card was ‘The Wire,’ there were people who had no idea I could be funny.”

As a stage actor, his many theatrical appearances have included a 1997 production of “Othello,” starring Patrick Stewart. In 2009 he starred in a Broadway revival of August Wilson’s “Joe Turner’s Come and Gone,” ultimately performing in front of an audience that included President Obama and his wife, and Meryl Streep.

“That was probably the most amazing night of my life,” says Coleman, whose 13-year-old daughter, Sasha, made her Broadway debut in a 2010 revival of Wilson’s “Fences,” starring Denzel Washington. Now divorced, Coleman is expecting his second child this year.

With “The Walking Dead” returning, Coleman is preparing for a new level of fame. “‘The Wire’ fans are intense but ‘The Walking Dead’ fans are really vocal,” he says. “These are two groundbreaking shows. ‘The Walking Dead’ has right now gotten 10 million viewers. They are actually beating out network shows and they are on cable. It’s pretty awesome to be a part of two shows that absolutely have changed the face of television.”