Historic Garden Week returns in April, all outdoors this year. 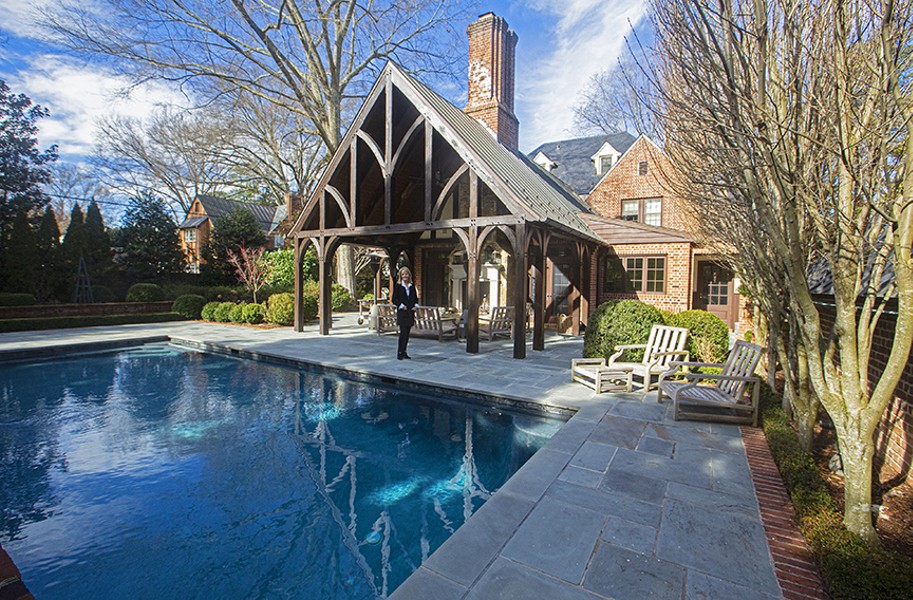 Scott Elmquist Melinda Hardy, whose grounds will be featured on the Hampton Gardens tour, stands near the Tudor-inspired porch, part of a 2004 house addition designed by Cox and Associates architects, that provides considerable outdoor living space.

“When Will Travel Return?” screamed a New York Times headline in 2-inch type on a recent business section front.

Good question. The story reported that 2020 for airlines was “a year of going through hell ... the toughest” in the industry’s history. Travel is also critical to Virginia’s economy since tourism is the state’s fifth-largest employer and delivers $26 billion annually in revenues.

Locally, however, there’s a clear answer to the Times’ question. Travel should return to Virginia and Richmond from April 17 to 24. That’s when Historic Garden Week, presented by the Garden Club of Virginia, will offer 30 tours statewide. These include outstanding private landscapes from the intimate to the epic, as well as public gardens and historic sites. In Richmond, three special tours on consecutive days will offer visitors the opportunity to experience private domains in Hampton Gardens in the West End, Church Hill in the East End and on Monument Avenue.

The Virginia Is for Lovers campaign kicked off 52 years ago, developed by what is now the Martin Agency, and is still going strong, while Historic Garden Week will mark its 100th year of presenting springtime tours next month. The event, which has previously included private home interiors as well as grounds, was canceled last year due to the pandemic. This year, the Garden Club has carefully calibrated new procedures: Only outdoor gardens and environments will be open and advance ticket purchases, timed access and masks are required.

So while most organizations and institutions tiptoe toward the best possible paths to re-emergence, the Garden Club enjoys a built-in advantage. Its mission is sharply focused on experiencing the outdoors, and the beautification of private and public places. Environmental conservation and historic preservation have anchored its mission since the club’s founding in 1920. Tour proceeds go toward the professional restoration of historic gardens across the state as well as enhancing Virginia’s 40 state parks.

Also expect spectacular floral arrangements, of course. The Garden Club promises 1,000 arrangements at the collective sites. Wouldn’t it be ironic if the club created a statewide azalea, tulip and lilac blossom shortage?

You may motor regularly east and west through Hampton Gardens, along well-traveled West Cary Street or Grove and Patterson avenues, not realizing the number of gracious and magnificently well-settled homes and gardens that sit behind the red brick walls and well-clipped hedges. This was one of the city’s first streetcar suburbs, developed around a suburban estate, Pinehurst, now Westbourne, which still graces the neighborhood

Among the five houses on the walking tour, in a range of architectural styles, is the handsome English Tudor revival house nestled beneath a canopy of mature shade trees at 9 Roslyn Road. Its grounds were landscaped in 2010 in a collaborative effort. Marsha Fryer of Hardscape designed the walkways, terraces and retaining walls in myriad brick patterns including herringbone. A large swimming pool, fed by fountains, is a dramatic unifying feature. An outdoor stone fireplace and a generous extended porch, both attached to the house, create a seamless, single-level living space. Janet Baruch of Greenway Gardens created the meticulously planted and maintained plantings in the front, side and rear of the house.

A few miles away, at 12601 River Road in Goochland County, Tuckahoe, the boyhood home of Thomas Jefferson, is also featured on the Hampton Gardens tour.

Church Hill, in the vicinity of the 18th-century frame St. John’s Episcopal Church that still graces its knoll, is where Richmond began. By the end of World War II, many of its residents, both African American and white, had moved on, leaving in their wake many decaying and empty architecturally significant houses. Historic Richmond, which was organized in 1956 to spearhead a methodical reclamation effort, is partnering with the Garden Club of Virginia for this tour that features four houses and St. John’s.

Two of the first dwellings to be restored in the historic district were the Federal-styled Hilary Baker House at 2302 E. Grace St. (1814) and the adjacent Thomas Hardgrove House at 2300 (1849). These places, connected by a back gate, will both be open. In addition to carefully planted brick and stone terraces in front and back, they both have evocative, old brick outbuildings. The Hardgroves were tobacconists and there is an intriguing old brick curing shed in the garden. 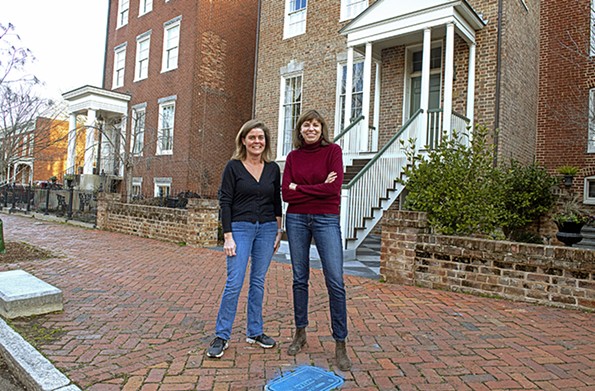 The Baker house also has a newer addition, a lap pool that melds nicely as a water feature if one isn’t up to freestyle or breaststroke. Another 19th-century house on the tour, the Dykshorn House at 125 N. 25th St., features a bold contemporary update to its frame structure: an elegant glass-enclosed addition.

Also on Wednesday, as an adjunct to the Church Hill tour, guided walking tours of the Low Line will be offered for free by Capital Trees. Participants will step off at 1 p.m. from Great Shiplock Park at 2803 Dock St. in groups of 10. No reservations are required for this examination of informal, lush and hardy plantings along the James River and Kanawha Canal and underneath the muscular and still-active railway trestle.

No Richmond thoroughfare has undergone more scrutiny or change during the past year of historical reconsideration and racial reconciliation than Monument Avenue, the centerpiece of a former streetcar suburb. And while most of the Confederate statues are gone, the distinctive residences and their grounds remain. Among the distinguishing characteristics of the boulevard is the variety of architectural building types.

The yellow stucco house at 2319 Monument, designed by the distinguished local firm of Lee and Lee in 1925, is Mediterranean revival in spirit, conjuring the old Hollywood of Rudolph Valentino. Its rear and side gardens are approached by a stone marble pathway and a metal gate. Comfortable lounge furniture is set beneath large trees, a tranquility pool is accentuated by a sculpture and borders are planted lushly. There are also vistas of houses in the colonial revival architectural styles across the avenue. The owners often share this elegant setting for benefits with nonprofit organizations in which they are involved. So, Garden Week visitors can imagine the clinking of ice cubes, bask in springtime in the city and contemplate the future of this internationally known and landmarked avenue. 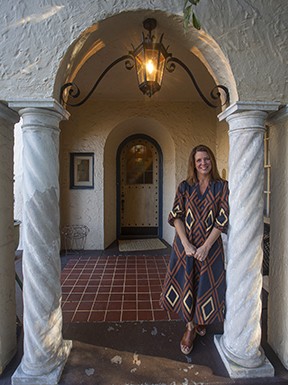