Walking in a Wonka Wonderland 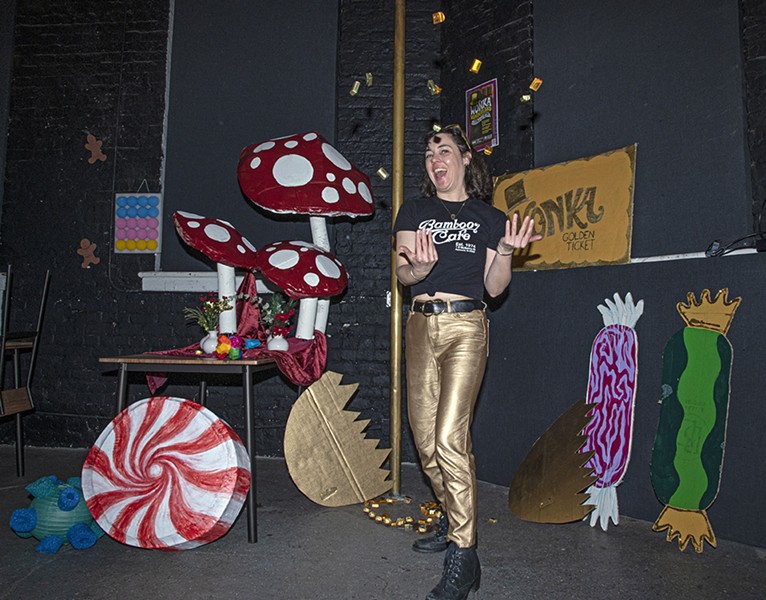 Around this time last year, in the depths of a pandemic winter, Chrissie Lozano became entranced with Bamboo Café’s TV set while she was bartending. Or, more accurately, she was spellbound by what was on the Fan bar’s TV: the trippy, 1971 family movie, “Willy Wonka & the Chocolate Factory.”

“Like everybody, I was locked up with nothing to do but stare at the TV. That TV just happened to be at Bamboo,” recalls Lozano, who plays bass and sings with local rock group Piranha Rama and Talking Heads tribute band Fear of Music. “I started thinking about how great the music was.”

That led Lozano and Piranha Rama guitarist Nat Quick to create Wonka Wonderlnnd, a music and art experience that will celebrate the 50th anniversary of the Gene Wilder classic. Taking place this Friday at Gallery5, an all-star lineup of Richmond musicians will endeavor to give attendees a healthy dose of Wonkavision to help shake off the pandemic blues.

In this wild reimagining of “Willy Wonka” Lozano, Quick, other members of Piranha Rama and a host of local musicians will reinterpret the film’s music while live puppetry is performed and attendees mingle among Wonka-themed art installations. Cocktails will be sold carrying the Wonka theme. As with all Gallery5 events this month, proceeds will benefit HomeAgain, a local nonprofit that helps people who are displaced find residences and covers utilities for people having a hard time financially.

In adapting the movie’s songs for a live band, Lozano and Quick say they’ve taken some artistic license.

“We had to domesticate these songs to fit into a rock band format, and we have a few different people coming up to sing the different songs from the show,” says Lozano. For instance, Paul Ivey of WRIR 97.3FM and Gouda Mayhem fame will perform a punk rock version of “(I’ve Got a) Golden Ticket,” and Corey Axt of Faceship will present a finger-picked interpretation of “The Candy Man.” At least one notable song from the film, however, won’t get a full staging.

“We won’t go all in on the ‘Oompa Loompa’ song, because we find [the Oompa Loompas] a little over-moralizing, but everyone knows the tune, so we’ll definitely do some ‘Loompa-ludes’” between other songs, Lozano says.

The core band consists of Lozano on bass, Quick on guitar, Tim Falen on drums, John Sizemore on guitar and Eric Godsey from The Wimps on keys. Other performers include Bob Miller of Bio Ritmo on trumpet, Reggie Pace of NO BS! Brass Band on trombone, Chris Sclafani of The Flavor Project on baritone saxophone and Brent McCormick of The Wimps on guitar.

Opening and closing the show will be DJ Olnubi, otherwise known as Armando Muñoz of The Flavor Project, serving up “some blazin’ funky tunes,” Lozano says. Live puppetry and other visual representations of the movie will be created by the Limp Wrist Puppet Company, comprised of Edward Breitner, Beth Reid and Savannah Goodenow. “[It] should be very visually stimulating, with projections and live action props … shadow puppetry, and then some smallish art pieces around the gallery,” Lozano says.

So, why Willy Wonka?

“I love color. I love bright, vivid things like that, and the music is really captivating. You know, [the movie has] got this sort of rough edge to it that makes it not exactly for kids,” Lozano says.

In preparation for the event, Quick recently rewatched the film.

“All the songs in the movie were really nostalgic and heartfelt, and really hit me in a different way. It really hit us both, I think, right in the feels,” they say. “After such a long hiatus of playing live, we thought it would be a really joyous thing to get together with our friends and do something creative and fun. It turns out that all of the songs in the movie lend themselves to different interpretations.”

Attendees are required to either bring their vaccination card, a photo of it or a negative test within the prior 72 hours that matches a patron’s photo ID.

While cosplay is not required, Quick and Lozano say it is encouraged.

“I mean, it seems like a good excuse” to dress up, Lozano says. “I think everybody’s still pretty stir crazy. Any excuse to get out and wave the freak flag is good.”