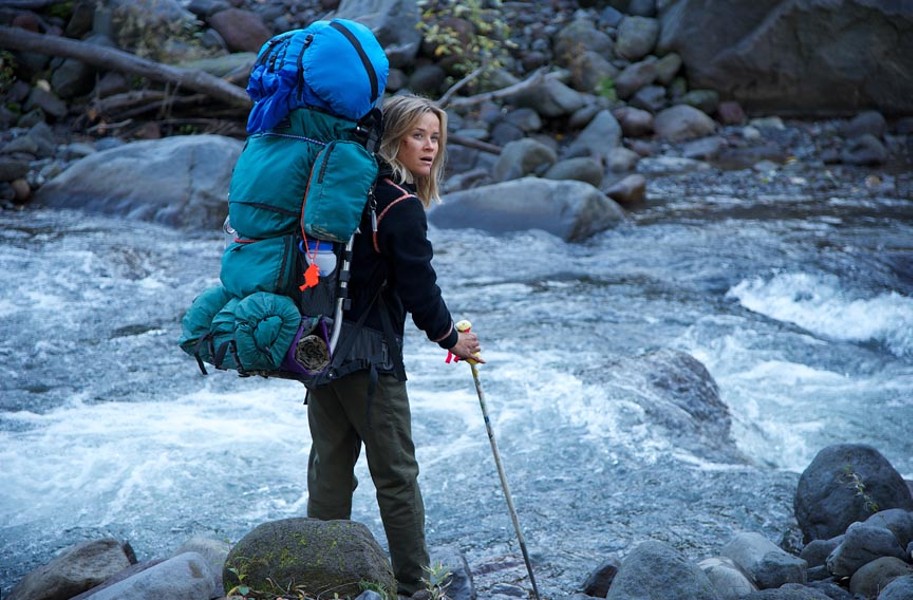 Fox Searchlight Pictures Actress Reese Witherspoon, hailed lately for her comedic talent, takes on a serious role as former real-life junkie Cheryl Strayed, who hiked the Pacific Crest Trail to find herself. The trail from Mexico to Canada is known to wreak havoc on hikers’ feet.

They say the journey is the destination, which is good news for “Wild,” a hiking memoir at its best in bits and pieces along the trail.

The adaptation stars Reese Witherspoon as Cheryl Strayed, who walked the 2,663-mile Pacific Crest Trail and wrote about it. But the film version isn’t quite as memorable or meaningful as it seems intended.

The author, who changed her last name to Strayed — as Dante might say it, from the straight way — wrote about her grueling trek from Mexico to Canada in “Wild: From Lost to Found on the Pacific Crest Trail.” She embarked to kick bad habits and help put a damaged life back on track. While those intentions come through clearly enough, too much of the adaptation’s trek through the scrubby American West is dramatically plain and meandering.

Although such reports might be exaggerated or even fabricated to promote the film, Strayed and Witherspoon supposedly have become close. If true, that’s probably done more harm than good to the adaptation. “Wild” feels like the kind of collaborative, executive-producer effort that might seem like a good idea but usually winds up as film by committee, trying to please everyone involved without thinking enough about the audience.

“Wild” will remind you alternately of Danny Boyle’s “127 Hours,” Sean Penn’s “Into the Wild” and indie (off-) road movies such as “Old Joy” and “Wendy and Lucy.” But it never reminds you of itself. In fact, it has little to say that hasn’t been said better. Though it’s a story about risking it all and finding one’s self, “Wild” seems risk-averse, lacking individuality and personal insight.

Another problem with Witherspoon-as-Strayed is that Witherspoon just isn’t the right actress for the role. Better as a comic actress, she seems to think deep emotions are found by squinting into the middle distance, as if trying to make out the tiny letters at an eye doctor’s exam. That squint is the focus of most scenes, which at least are better than the few where Reese-as-Cheryl screams into the middle distance instead. Laura Dern plays Cheryl’s mother in the film’s many flashback scenes, and Dern’s skill and experience serves only to emphasize Witherspoon’s limitations.

But the biggest issue is the film’s overweening need to find the utmost grandeur and resonance in Strayed’s journey. Witherspoon evidently liked the book enough to produce herself in it. But that kind of filmmaking argues for the time when filmmakers and film producers made the creative decisions — not the talent in front of the camera. You can tell Witherspoon really wants to find that grandeur and resonance. We follow her through brush, over rocks, across roiling streams, in and out of danger, and back and forth in time through memories looking for it. But it just isn’t there, or at least isn’t found.

This all might sound unkind given the film’s subject matter. Flashbacks illuminating the tough times that pushed Strayed into her physical and spiritual wilderness include childhood abuse, poverty, loss and the recent dissolution of a marriage. Strayed desires from her trip, as she recalls her mother beseeching over a pot of spaghetti when Cheryl was a child, to “find her best self.”

Like that memory, there are some nice moments here, including the self-deprecating comedy that infuses Strayed’s book. And those who lived through the mid-1990s or just like the folksier end of the musical spectrum will enjoy the soundtrack, full of period tunes and retro bands popular at the time, such as the Grateful Dead.

Everyone experiences loss and life challenges. Certainly not everyone goes on a three-month walkabout to overcome them. That part of Strayed’s story, the bravery and sheer agony of putting one foot after another all those many months alone in the wilderness, is admirable. It’s just difficult to say it’s important based on this dramatization, which, to be honest, doesn’t convey very well the toil and danger of Strayed’s journey. The most interesting thing about Strayed’s travelogue is the travel itself. It’s beautiful and sometimes scary looking, but you never feel like you’re in her boots.

Perhaps a little predictably, it all leads to catharsis. But when it arrives it feels more like self-help aphorisms than personal growth. “Wild” the film is a lot like Cheryl Strayed at the beginning of her long walk, packed with provisions but betraying an untenable naiveté about what to do with them. To encapsulate the experience, “Wild” just isn’t wild enough. (R) 115 min. S