If visually stimulating walking is a common denominator of strong urban design, Richmond has some long-embedded strikes against it.

Unlike super-flat Charleston, S.C., a city that sets the bar for Southern comfort in strolling amongst magnolias and bougainvilleas, Richmond is challenged by topography of steep hills. And while the South Carolina town is neatly contained within a well-defined peninsula lapped by picturesque waterways, Richmond is an unruly weave of neighborhoods. Working-class districts abut upscale residential areas, which flow into industrial areas — some trendily re-purposed, others decaying. Richmond also has wide streets downtown and, unfortunately, a plethora of surface parking lots that drain additional visual energy.

But this doesn't mean Richmond is devoid of delightful pedestrian experiences — they are there. The trick is in knowing where to roam.

Three modest, diverse and well-conceived projects recently have been established downtown, each of which adds unique, much-needed vitality to the environs.

There are the newly landscaped grounds of the Monumental Church at 1224 E. Broad St. Nestled amid Virginia Commonwealth University's medical campus, this architecturally superb, now de-sanctified Episcopal church long has appeared stranded like a beached whale on the eastern slope of Shockoe Hill. Eight lanes usually teeming with vehicular traffic, but no street parking, contribute to the site's poor accessibility.

That's too bad, because this landmark is one of the city's most poignant sites. Monumental is the burial place and memorial for 72 Richmonders, as wide-ranging as a Virginia governor and slaves, who died in a horrific theater fire right after Christmas in 1811.

The Historic Richmond Foundation is a steward of this landmark and has performed yeoman service to preserve physically, and encourage programmatically, this challenging historical treasure. The tragedy that occurred here, and the mausoleum that was the result, understandably limits appropriate uses of the property.

One way the sanctuary has been kept alive is its availability for weddings. This too has been problematic because the building sits within a high, 200-year-old brick wall that cordoned off the site immediately after the fire. Thus making Monumental a welcoming place and connecting it to its medical campus surroundings long have been a conundrum.

Recently, the foundation enlivened this sacred space and made it more conducive for public activities while honoring its original purposes. With the Goochland-based, design-build operation WestView Cos., workers placed a flat, brick terrace edged in granite on the west side of the church's unique and handsome sandstone portico. Into this platform, ordered, rectangular slices of granite are set among the bricks. Each stone block is engraved with a few words illuminating historical highlights of this site — the Virginia Convention that ratified the United States Constitution in 1788, the building's design by Robert Mills, the country's first professional architect, a visit by Lafayette. A slab left blank awaits the marking of a future event. The terrace will accommodate short-term parking and temporary tent installation for events.

This architecturally well-tailored and dignified amenity is named for two philanthropists, Waverly Cole and John Cooke, recently deceased life partners who, in addition to careers in medicine and education, respectively, were committed to living in and preserving old Richmond neighborhoods. The adjacent Betty Moore Garden (named for a late, famously outspoken denizen of Church Hill, former VCU professor and preservationist) is a greensward that encircles Monumental to provide a welcome oasis amid the cluster of institutional buildings. 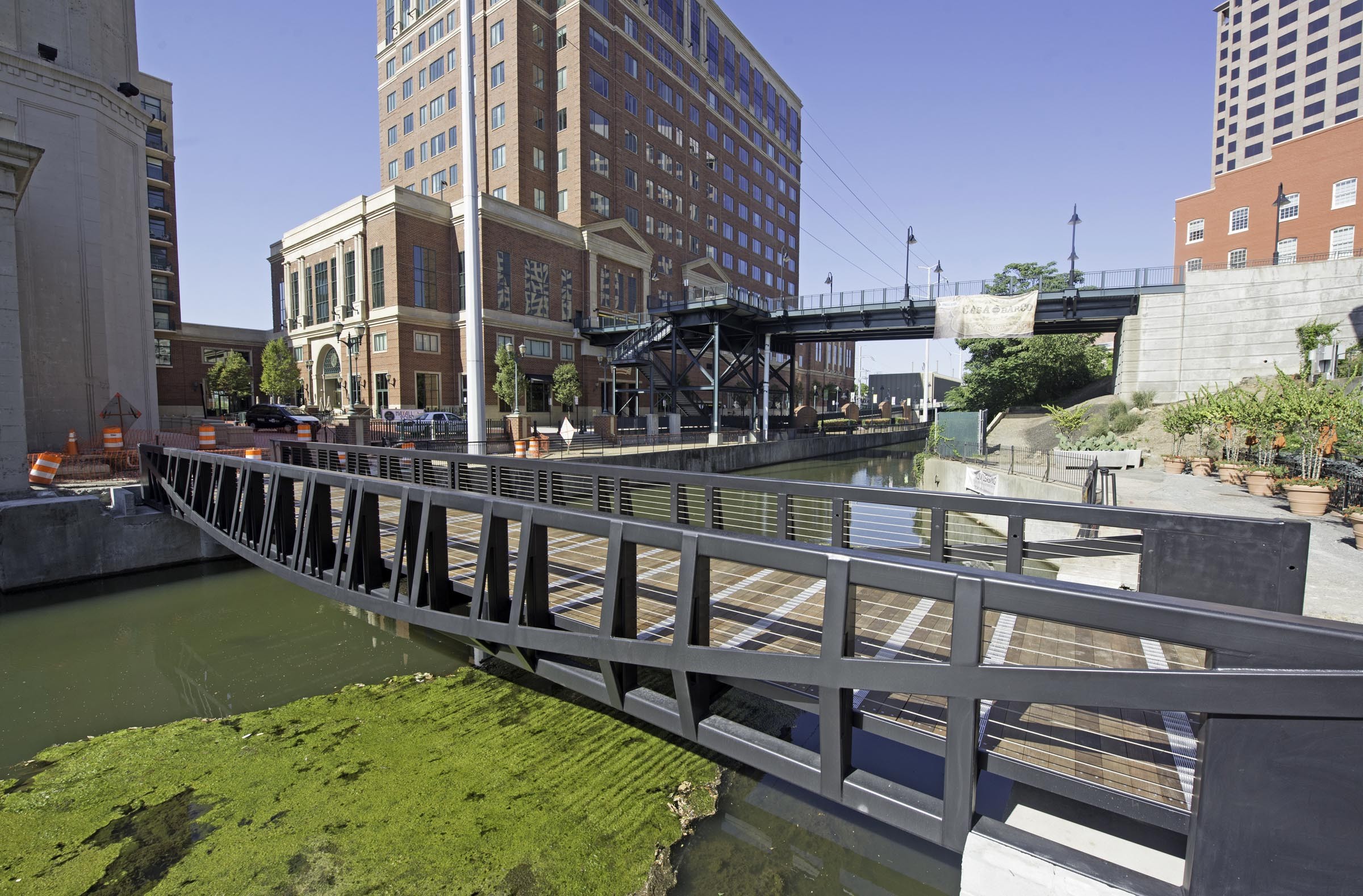 A quite different new pedestrian amenity is a footbridge at the base of 12th Street, in a spot near the river where vehicular access is all but impossible. The handsome steel and wooden structure crosses the canal walk near pedestrian entrances to the Riverside on the James office and residential towers and the Italianate Building of the Locks, a multiuse adaptive reuse of five former Reynolds Metals manufacturing structures.

Specifically, the bridge will allow patron connectedness between two restaurants, Haxall Point by F.W. Sullivan's and Casa del Barco. Until now, they were separated by the old Haxall mill race.

This sleek new bridge is composed of steel supports and railings and wooden decking. It was constructed in New York, shipped here, and set in place earlier this month. Final paving along nearby sidewalks and landscaping is underway. It was spearheaded by the city's Economic and Community Development Department.

While the design reflects nearby industrial infrastructure (especially the vehicular bridge connecting South 10th Street with the Riverside garage), its smooth metal railings are user-friendly. And of course, Richmond isn't Venice, but the new bridge will provide a special pleasure offered by that Italian city, crossing a short span while enjoying additional views of nearby buildings and fellow pedestrians.

A third recent project that animates the downtown experience was far less expensive than the terrace or bridge. It also required no bricks, stone or metal, unless you count folding aluminum chairs. At Quirk — a gallery of things bright and delightful at 313 E. Broad St. in the Arts District — an asphalt parking lot is transformed into a pop-up cinema on certain Saturday nights. The gallery, along with a number of co-sponsoring neighboring galleries, shops and eateries, is screening a popular film, free, at sundown on the fourth Saturday of each month. This week's screening is "Mean Girls" with Tina Fey and Rachel McAdams. Refreshments are available for purchase. Rain? Things will move inside.

It may be a small parking lot, flanked by aging buildings, but by populating the space even for one Saturday night a month, an otherwise hard, urban surface is softened and humanized. And like the newly executed amenities at Monumental Church and along the Canal Walk, brilliant. S