Walk on the Mild Side

The music-smitten preschoolers' show "Yo Gabba Gabba" finds fuzziness in the fringes at the Landmark Theater. 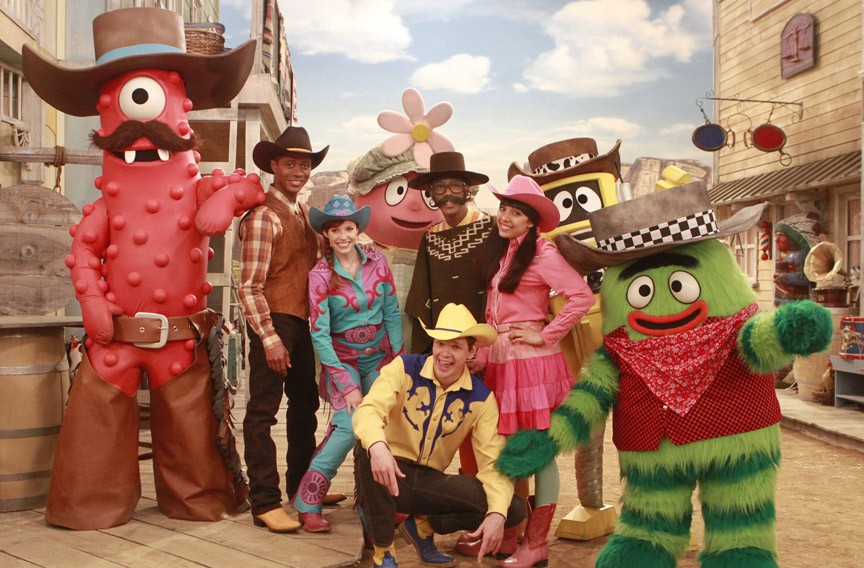 Who would've thought a legendary San Diego punk band would reunite for a show for toddlers? But this is no ordinary show. What lassoed the band Rocket from the Crypt back into action was "Yo Gabba Gabba," a brilliantly kaleidoscopic and kooky live-action program starring five monsters and an eager orange-clad host named DJ Lance Rock. The show airs on Nick Jr. television and is aimed at a 1-year-old-and-older audience.

"Gabba" began airing in 2007, but the idea behind its musical focus goes back to about 2003 when co-creator Christian Jacobs' 13-year-old daughter was 2. Jacobs was flipping channels and she was playing with her toys when he flashed past a hip-hop video he recalls as 50 Cent's "In Da Club." The "super primordial beat" stopped his offspring in her tracks. Jacobs didn't want his child experiencing the video's content, so he clicked away and she stopped paying attention. He soon flipped back to re-test her reaction, and sure enough, she was into it again. At that point, he realized that the simplicity of music forms he enjoyed also could be palatable to children.

With its roll call of musical guests featuring a chunk of indie-music faves who have no link to kids' entertainment otherwise, "Gabba" is astonishingly hip for a show aimed at toddlers. Among the bands that have played: the Flaming Lips, the Killers, MGMT, the Shins, Jack Black, the Roots, Weezer, and several others, and 1980s rapper Biz Markie (who will be in Richmond) and Devo's Mark Mothersbaugh play host to reoccurring segments.

Underground-oriented rock, electronica and hip-hop are legitimately vital to the show's appeal. Because of that, the program has gained a reputation as a safe space for bands to subvert their more adult angles and openly endear themselves to a younger set. The show is vibrant, silly fun that features a flood of mainstream and underground musicians familiar and credible to parents 20 to 50 years old. Even the program's name is a takeoff on a phrase from the Ramones song "Pinhead."

Co-creator Scott Schultz has likened the "Gabba" live experience to "your kid's first rock show." The program's third tie-in tour, Get the Sillies Out, is currently on a nationwide run spanning more than 50 dates. Steered by Lance Rock and the creatures from the stage, the traveling party is heavy on bright visuals and the show's top tunes. Guests such as Snoop Dogg, Dave Grohl, Devendra Banhart and Erykah Badu have popped up in live performances before, but the only established artist officially attached to "Get the Sillies Out" is Markie, who will lead his Biz's Beat of the Day segment in person.

Though it enjoys a level of popularity far beyond its predecessors, "Gabba" surprisingly isn't the first show to pair indie musicians with children's programming. "Chic-A-Go-Go" and "Pancake Mountain" did the same. For its creators, the goal of "Gabba" is to show off people who inspired them and ideally cultivate new music fans, too.

"Who we look for in celebrities and guests that come on the show is people that are genuinely interested in children and helping kids, whether it's their own kids or just kids in general. That energy is important. We've had some people that want to come on the show that we've turned down because we felt like the energy wasn't right," Jacobs says. "We're not looking for people that are trying to promote themselves, and we're not trying to use those people to promote us." S