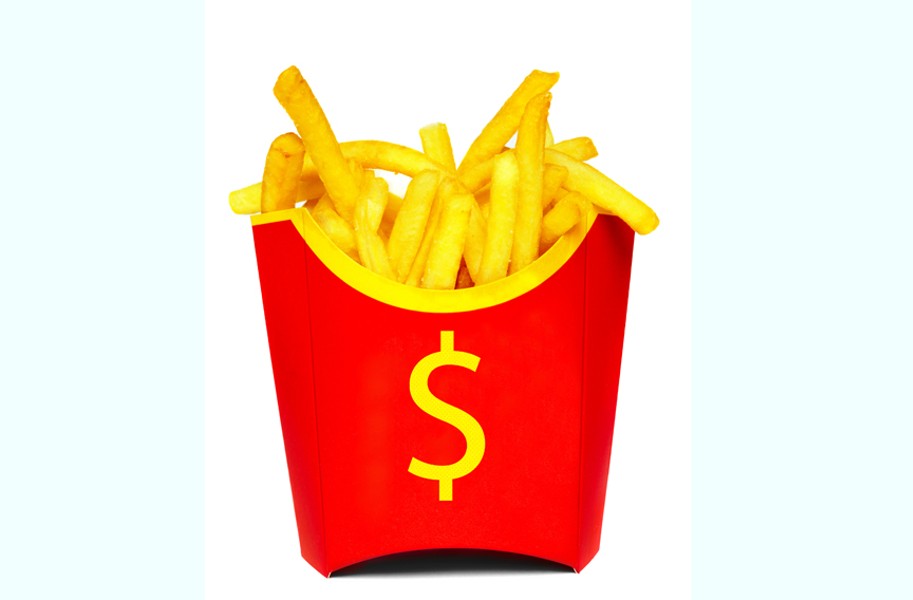 It’s not just the road to hell that’s paved with good intentions. It seems that the line at the unemployment office shares the exact same floor covering.

For the past few years, we’ve seen professional agitators and the perpetually aggrieved doing everything possible to exploit hardworking, but ignorant, people across the country. Very well-paid organizers and hacks have worked overtime to convince those with the most marginal of job skills that they should actually be paid $15 per hour as opposed to their current minimum-wage rates.

Fast-food workers tell us that they work hard and they are right. Our jobs can be dirty and dangerous, they proclaim, and I agree. They remind us that customer service isn’t easy. Right again. In unison they yell, supersize our wages. We deserve $15 per hour, they shout.

Sorry, that’s where we get a flag on the play.

If you’ve ever worked in a fast-food joint, you know that the work can be arduous and the environment fast-paced. I agree that folks who are working in fast-food places are on their feet throughout their shifts, dealing with hot kitchens and customers who can be irate. But that doesn’t mean their pay scale is somehow out of whack. I’m not sure if Hamburger University. offers an Economics 101 course, but perhaps Dean McCheese could consider adding it next semester.

Sometimes things can be complicated and ideas complex. But economics, despite the often-dizzying lexicon employed by staffers at the Federal Reserve Bank, is a relatively simple science in many regards. We live in a world of supply and demand. It might not always feel good, but that’s just the way it is. While the workers at your local fast-food eatery work hard, the work they do requires very little in the way of skills. I don’t mean this to be nasty, just honest. It really doesn’t take advanced training to flip the burger or push the picture of the small soda cup. That means there’s a very large supply of people available to fill those positions.

I cringed when I recently heard a woman who worked for a leading fast-food chain bemoan how the chief executive officer for that company was being paid millions of dollars while she was making only seven bucks an hour. She noted how hard she worked while claiming that her corporate overlord was just sitting at a desk all day.

Ma’am, he may be sitting at a desk during the day, but he’s busy overseeing the management of thousands of restaurants around the world. Profit, loss, expansion, marketing and a hundred other items cross his desk every day. You have one job: shake salt onto the french fries. During my last trip to the drive-thru, you didn’t even get that right.

As I drive down Broad Street I see dozens of striking Verizon workers walking the picket line. I’m about as strong a labor guy as you can find. I was a union member and a union leader, but it’s time for reality to visit the red planet and help those strikers get a glimpse at certain economic facts. I don’t quibble at all with these folks about how hard they work. They are right that serving their customers can be hard work, but in the end their jobs are pretty straightforward. It doesn’t take a massive amount of skill to do what the Verizon workers do when they aren’t on strike. I wonder if they can hear me now.

Janitors work very hard but little is required besides a strong back and an equally strong gag reflex. Mopping floors, scrubbing toilets, cleaning up spills and piles of vomit all come with that job. How do I know? I did that job as a teenager. I spent many hours scouring trash cans and cleaning ashtrays piled high with slightly melted ice cream and cigarette butts which combined and formed a most grotesque sludge when it was all mixed in with chewing gum and soda. I cleaned the toilet a few times each shift. Some folks hit their target, some did not, but I was responsible for making it all look as pretty as possible. I vacuumed carpets, washed the windows, took out the trash and I did it all with a smile. I thought I deserved a hundred dollars an hour, but the free market begged to differ. One more time, it was that damned supply and demand.

The students at University of California at Berkeley have recently been advocating for the janitorial staff at their college to be paid $15 an hour. They held protests and demonstrations, drum circles and sit-ins at the chancellor’s office. The students were successful in convincing the college administration that the janitors should get that magical wage.

Just days after it was announced that the janitorial staff at Berkeley soon would be enjoying a doubling of their hourly rate, it also was revealed that 6 percent of the work force, more than 500 people, would be let go.

These folks no longer had jobs, but at least the jobs they’d lost were higher paying.

Jeff Katz can be heard weekdays from 3-6 p.m. on NewsRadio 1140 WRVA and the Jeff Katz channel on iHeartRadio. You can follow him on Twitter at jeffkatzshow and Facebook.com/radiokatz or reach him by email at jeff@wrva.com.