Richmond's WRIR celebrates six years of giving the rest of us a voice. 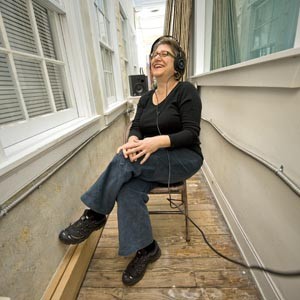 And you thought radio was a dying medium.

Regardless of competition from the Internet, satellite radio and television, growing numbers of people are tuning in to 97.3 FM — with the best coverage area of any low-power frequency in the nation — to hear community programming by and for locals. As the bumper sticker goes, it's “radio for the rest of us.” The station even made Paste Magazine's 2010 list of the 40 best little radio stations in the country.

Already this year has been memorable for the noncommercial low-power radio movement. On Jan. 4, President Barack Obama signed the Local Community Radio Act, which clears the way for expansion of low-power stations — defined as 100 watts or fewer — while giving the Federal Communications Commission more flexibility in assigning channels and handling interference issues.

Liz Humes, president of WRIR's board, says the low-power movement was an answer to the deregulation of the radio spectrum started during the Reagan years, a corporate bonanza that left local people without a voice.

“There probably will be other low-power FMs in Richmond now, but [the act] will not really affect us, besides making us more secure on the dial,” says Humes, who lobbied and spoke on Capitol Hill during the last couple of years to help get the bill passed. “We are their flagship station. … That we've done so well as an independent lent itself to a fantastic example of what LPFM can be.”

WRIR went on the air in 2005 partly because of a perceived lack of adequate programming from Richmond's official public radio broadcaster, WCVE. Now, besides playing host to a variety of local DJs and talk shows, as well as the station's most popular program, the nationally syndicated “Democracy Now!,” WRIR fulfills one of its most essential roles as Richmond's official emergency broadcast outlet, providing updated information during extreme weather and other emergencies. During top-tier emergencies, 100 percent of the station's airtime can be taken over by the city.

But that contract is about to expire in March, according to city officials, and it will provide no more funding.  The station likely will see increased competition for a five-year, $250,000 grant given by the Homeland Security Department to help emergency outlet providers. That's because state funding for public broadcasting has been declining for years and could soon end completely. Gov. Robert McDonnell introduced a plan to stop funding (roughly $4 million a year) for the Public Broadcasting System — which cannot air commercials by regulation — over the next two years. In addition, Republicans in Congress hope to completely eliminate federal funding for the Corporation for Public Broadcasting, which assists National Public Radio and PBS.

“None of these monies we were going to see,” Humes says. “But now WCVE is going after the emergency services contract and our funding.”

Bill Miller, vice president and general manager of WCVE's radio station, says the station is operating with less than half the money it had in 1999 and has dealt with this by becoming “more efficient.” Regarding emergency broadcasting, Miller says the station has a variety of arrangements with different localities depending on size and funding. He adds that his station is ready to help provide emergency notification if it can work out a financial arrangement with the city.

“That could be contingent on [the city] receiving money from a third source,” he says. “But if the city just wants us to be an alternative, we'll do our best to accommodate them.”

While funding will always be a battle, a key to WRIR's success has been an increasing presence at community events. The station can be found setting up at tables at First Fridays, Richmond's Earth Day, the Vegetarian Festival, the Jonny Z Festival and holiday events such as the recent Capital City Kwanzaa Festival.

“In terms of community outreach, supporting nonprofits and homegrown cultural events is extremely important for us,” says Mike Rutz, events director at WRIR (and a music writer for Style). These events are also where DJs meet their audiences.

“I'm always surprised by how broad the spectrum of people is,” says DJ Charles Williams, 52, host of “The Other Black Music” and co-host of “Ambiance Congo” with David Noyes, which he adds has an overseas following. “We love to hear their input.”

Some 200 Richmonders from 10 to 70 years old donate their time as volunteers at WRIR, and the station holds several pledge drives each year that have been steadily increasing in listener support. The anniversary party remains one of the station's biggest fundraisers, Humes says.

This year's lineup is another attempt to capture the diversity of the Richmond music scene. Featured bands on the main stage include: the Diamond Center (mesmerizing psych folk transplants from Lubbock, Texas), Marionette, Ultra Dolphins and Pennyshaker; while the second stage will be anchored by Richmond Youth Jazz Guild, Black Liquid, Turnstyle Soundsystem, as well as WRIR DJs, local slam poets and stand-up comedians. The evening will begin as it did last year, with the Native American drum and dance ensemble Youghtanund.

WRIR is reviewing its mission and establishing long-term goals. The next big thing, Humes says, is a plan to branch out and provide more news coverage through a community newsroom that would train journalists, as well as increasing call-in capabilities for discussion of local issues.

“The term right now is hyper-localism and how we can really gear toward the community of Richmond better,” Humes says. “There are still radios being put in every car produced, so as long as that is happening, radio is going to be OK.” S

WRIR's Party for the Rest of Us is Friday, Feb. 4, at 7 p.m. and continuing until midnight at the Renaissance Ballroom, 107 W. Broad St. A $10 donation at the door benefits WRIR and includes access to all entertainment.