Votes from the Underground

The U.S. Capitol's new visitors' center introduces Americans to some lesser-known figures on their way to the surface. 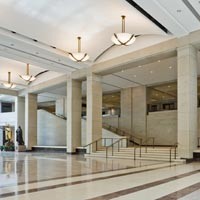 Two native Hawaiians can't be missed at the nation's Capitol this week. One takes the presidential oath on the terraces of the complex's west front and moves into the White House. The other, Kamehameha I, stays put under the east front, in the new 580,000-square-foot, $621 million underground extension and visitors' center, which opened last month.

Kamehameha was an 18th-century Hawaiian warrior and king whose brilliant, gold-accented likeness is one of 24 statues (and the most garish) lining the walls of the addition's centerpiece and gathering place, the 20,000-square-foot Emancipation Hall, the size of about half a football field.

With the advent of the 21st century, the new wing's planners, curators, exhibit designers (Ralph Applebaum Associates of New York) and architect (RTKL of Baltimore) attempt to tell new American stories — stories that weren't included in the patriotic, 19th-century narrative that permeates the friezes, statuary and paintings of white politicians in the Capitol.

Emancipation Hall honors the slaves who built the Capitol, and the 24 statues that populate it are taken from a collection in which each state is allowed two sculptures. If the founding fathers have long hogged the space in the rotunda and corridors and old Senate chamber of the main building, we're introduced to other figures here, Philo T. Farnsworth of Utah, who pioneered television, and John L. Swigert, a Coloradan and Apollo 13 astronaut. In some ways not enough time has passed, and the effect is more like Madame Tussauds' wax museum.

But a main purpose of this massive construction is to move thousands of visitors through the Capitol more efficiently and comfortably while giving them some major history and civics lessons in the process.

Long, dual ramps descend for half a city block to reach twin entrances. Here, security areas (water bottles and food are confiscated) open onto a mezzanine level with restrooms, coat checks, gift shops and tunnels that lead to the Library of Congress, legislative office buildings and a dramatic view of Emancipation Hall below. This generously scaled transitional area between the outdoors and the visitors' center does an excellent job of orienting one to the space.
Two broad, grand, marble staircases lead from the m
ezzanine down into Emancipation Hall. The experience is akin to visiting the great hall of New York's Grand Central Terminal, also reached by an intricate series of ramps and steps. But while Grand Central is moodily sepia in atmosphere, the new visitors' center is fiercely white, with two large, bright skylights allowing generous views of the Capitol dome. In addition to the parade of statues in this space, there's ample seating and a large cafeteria.

A massive exhibition hall stretches across the entire back of the addition. Here, the history of both the Capitol and Congress is told through vivid contemporary and historic photographs, models, videos and fascinating artifacts. Dignified, elegant and ultimately moving, one should plan on at least an hour in this area.

But people come for the Capitol itself. Two queues lead to twin orientation theaters with steeply raked seating, showing a poetic, and thankfully brief, film reviewing the history of the Capitol. Visitors exit the rear and are led up into the structure's rotunda. It never disappoints as one of our nation's most awesome and poignant interiors. Incidentally, it's been repainted and cleaned so that it looks as fresh as the new addition below.

Now, about that 580,000 square feet: The visitors' center is large, but not that large, so I suspect the majority of the building is off-limits to the public, offering secure meeting and assembly rooms for Congress. Like the underground addition to Virginia's Capitol, this addition is about security in our post-9/11 world. S