Longtime volunteers at WRIR-97.3 look at the 10th anniversary of an indie revolution. 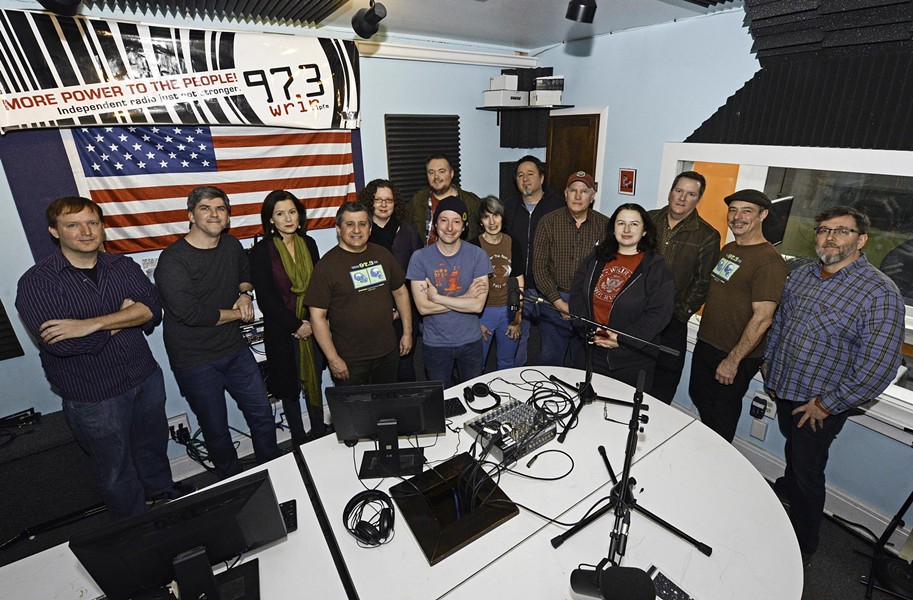 It’s hard to believe it’s been 10 years since the advent of community radio station WRIR-FM 97.3 Richmond Independent Radio. The station offers an invaluable outlet for community voices and alternative viewpoints, promotes local music and art, and has thrown quite a few fun parties.

This next one is a biggie: the 10th anniversary Party for the Rest of Us is Friday, Feb. 6. There’s even a dry-hopped Belgian pale ale, WRIR X, brewed for the occasion by Hardywood Park Craft Brewery.

A few of the hard-working volunteers shared their memories with Style. Here are some excerpts.

We just barely got everything in place for approval by the FCC — but we did it — and WRIR went on the air as planned in January of 2005, thanks to a window of opportunity made possible for a very short time by the Local Community Radio Act of 2005. We actually shared the second floor of 1621 W. Broad with Alan [Schintzius] and another person who were living in that space. I even remember Alan’s apartment mate wandering into the on-air studio in his pajamas with a bowl of cereal once. Alan decided to let us take over the lease after a few months, and he moved downstairs to renovate the space that would become his restaurant, concert venue, and community meeting place — the Camel — under a different owner and management now — but still going strong.

I’ve had many different jobs at WRIR, but maybe my favorite was community outreach director. For the first two years WRIR was on the air, I was the guy who responded to all the phone and email inquiries that weren’t directed to a specific person. … There were some comments I heard over and over: “I love the station!” (Thanks.) “How can I volunteer?” (Let me count the ways.) “When will you get more power?” (Maybe never.) “Will you play my band on the radio?” (Probably.)

And then there were unique ones: “I want to donate my synthesizer to WRIR.” (Why?) “You should change your call letters to WGOE.” (Easier said than done.) “You should hire Floyd Henderson.” (Does he work for free?) “You are unprofessional.” (Absolutely true.) “Ford has ripped off your bar-code logo.” (Also true.)

Local music director and curator, organizer of the concert series WRIR and the Commonwealth of Notions Presents

In January of 2011, there was a bit of unrest in Richmond. The powers that be were initiating plans to close down Monroe Park. As a result, this would remove a potential refuge to the homeless population during the bitter winter. WRIR had decided to set up a table at an enormous protest that was organized in the park. Bands were set up at separate corridors. Petitions were being handed around. As I managed the WRIR table, a few frequent comments kept being delivered. Several people considered our station to be the best representation of the voice of Richmond, Virginia. They applauded our reputation for providing a spotlight for the underrepresented arts and culture and giving a voice to the news that no one talks about in the mainstream. It made me realize that what WRIR was doing was important and it was a lot more than just a bunch of music fans spinning their favorite records on the airwaves.

Here is the greatest compliment I ever received by phone during my show: I had just seen the gypsy punks Gogol Bordello play here in town the night before at Toad’s Place. They played a killer two-hour set followed by a 45-minute encore. I decided that I would devote the entire show to gypsy music. Pretty early in, about 6:30 a.m., I get a phone call on the studio line, a couple of women who had obviously not gone to sleep yet, probably also still reeling from the fantastic concert the previous evening. I answer, “WRIR, this is Phil.” The only response was excited with glee and dance sweat through the line, “We’re just calling to say we dig your shit!” Then click, they hang up. No name. No other words said. No other words needed.  Perfect.

WRIR is a motley crew of proud artists, writers, activists, nerds, so-called creative types, producers, journalists, tech geeks, independent business owners, financial planners, lawyers, musicians, gardeners, graphic designers, independent media advocates, and maybe a ninja or two. … This is a huge anniversary for me and all of the other volunteers like myself because WRIR is really at the core of who I have become in the past 10 years since I got involved. As WRIR volunteers, we give whatever energy and effort we can afford to give outside of our full-time professional careers, families, and other obligations. … But the fulfillment we get as volunteers is beyond measure. S