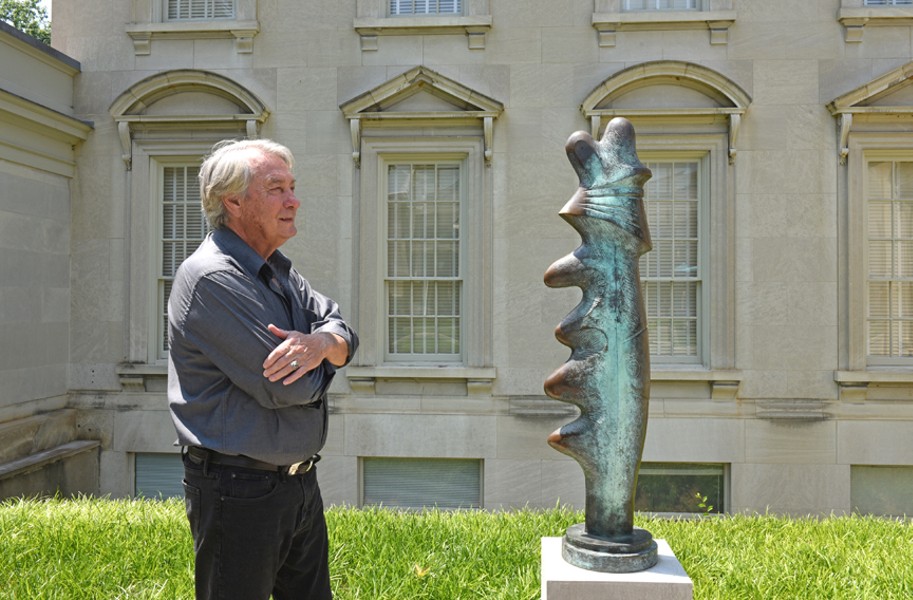 Aficionados of late-20th century sculpture may find “Untitled Totem” intriguing. The 5-foot, 2-inch bronze, which was recently placed in the verdant E. Claiborne and Lora Robins Sculpture Garden of the Virginia Museum of Fine Arts, is an essay in form, coloration and abstract scratchings.

Others may delight to know that it’s the only piece in the outdoor collection created by a Virginia artist, taking its place among such titans of sculpture as Dale Chihuly, Aristide Maillol and Henry Moore.

For sculptor Rubin Peacock, 74, seeing his own work near the museum’s Pauley Education Center, is a flashback to an evening 38 years ago. Working on the balcony of his apartment in Pietrasanta, a small town in the foothills of the Italian Alps, Peacock began carving the maquette. He’d been drawn to the Tuscan town in the 1970s, after receiving his master’s degree in sculpture from Virginia Commonwealth University.

“They have been doing casting and stone cutting and carving there forever,” he says. “It was here Michelangelo discovered the Carrara marble pits.”

“Untitled Totem” was then cast in 2005, using the lost-wax technique, in Peacock’s Sarasota, Florida, studio — his Richmond atelier is in Jackson Ward. The work was purchased by a fellow Richmond artist, Henrietta Near, and installed in the garden at her Fan District home as a memorial to her husband, Pinkney Near, a former head curator at VMFA. She later donated it to the museum.

“People ask all the time, ‘Where are you coming from?” says Peacock, a native of North Carolina. “Since childhood I have gotten as much out of the fantasy world as from the real world. I’ve always been able to drift into my ‘soul space’ when I’m working. I’ve never felt to need to justify my ability to look into another world.”

“My own work comes from my own spiritual world,” he says. “That’s about all I can tell people.”

In 1963, after graduating from the University of Georgia, where he learned the bronze casting technique, Peacock joined the Peace Corps. Assigned to a mountainous region of Jamaica where he worked in a foundry teaching students to cast in bronze and aluminum. “I only visited a beach twice in two years,” he says.

Peacock then moved to Richmond for graduate studies at VCU. Its sculpture department chairman, Charles Rennick, was influential, he says: “He was a fantastic human being to work with. We had a great rapport and he let you do what you wanted as long as it was pure from the artist’s heart.” S