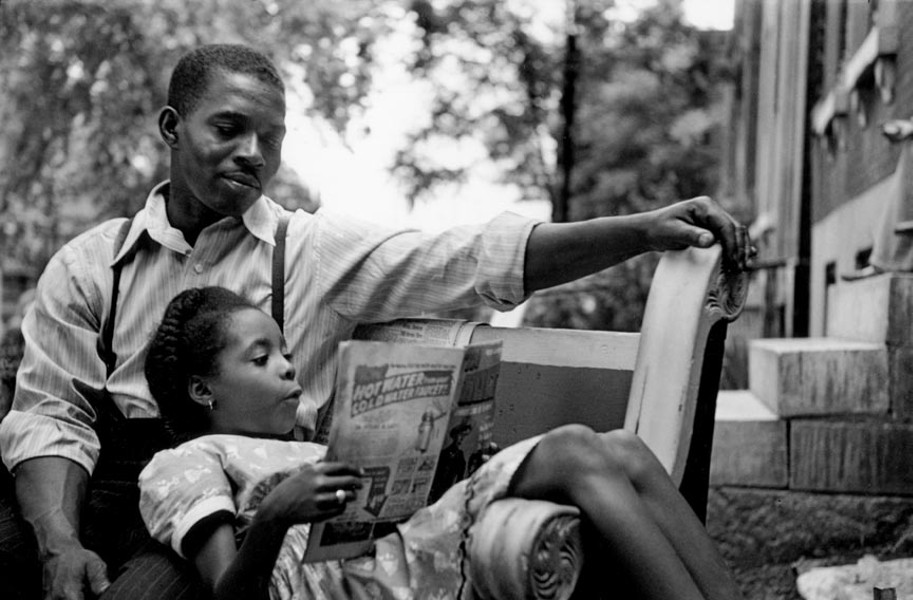 A young girl reads a newspaper while leaning up against an older man — presumably her father or an older brother — in a dress shirt and suspenders.

A family relaxes on the front porch. The father reclines while he smokes a pipe, the seated toddler mirrors his daddy while the mother works on her sewing.

A man in a checkered shirt and a woman in a cardigan and glasses stand side-by-side, her arm draped around his neck. Another young couple, out on a date, stand outside the whites-only Liberty theater, which advertises a film from 1949, “Dancing in the Dark.”

All are blacks living in St. Louis, Missouri, Columbus, Ohio, Chicago, and Fort Scott, Kansas. They posed for the 20th-century African-American photographer, Gordon Parks, in 1950.

Parks, who worked for Life magazine as the only black photographer from 1948 to the late 1960s, took these and another 38 gelatin-silver photographs for an assignment he completed that was never published.

In the photographs and accompanying essay, Parks traced the lives of his childhood classmates from Fort Scott, who all attended the same segregated elementary school.

A mostly self-taught photographer, Parks left his hometown shortly after his mother died and before he completed high school. The Life magazine assignment marked Parks’ first return to Fort Scott as well as his first writing opportunity. Although he originally intended to trace the stories of his classmates in the town, he discovered that many of them had moved to larger cities.

“In the Fort Scott photographs, Parks digs deep into the lives of his former classmates. He is unafraid to show the good and the bad,” says an associate professor of history at the University of Virginia, John Edwin Mason, who’s writing a book on Parks.

“It’s an exploration of two things that hadn’t been seen before in photography: the visual results of the Great Migration and the black everyday,” he says. “The quotidian was something that was rarely seen. Life was comfortable with showing black athletes, celebrities and criminals. But everyday black people just didn’t show up.” 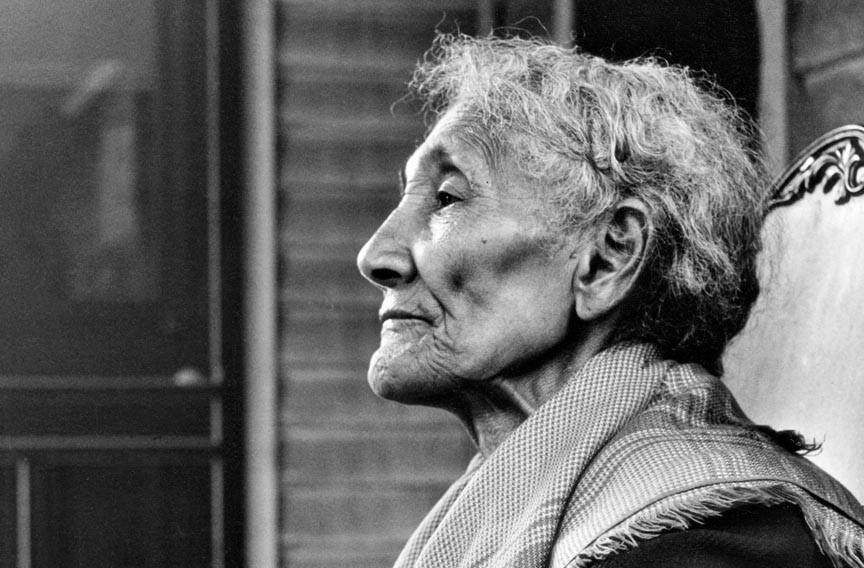 These photographs of Parks’ childhood friends will be on view at the Virginia Museum of Fine Arts in the traveling exhibition “Gordon Parks: Back to Fort Scott,” from July 23 to Oct. 30.

In contrast to earlier iterations of the exhibition elsewhere, the museum has added “Parks at Life: Works from VMFA’s Collection,” which offers eight additional photographs by Parks alongside copies of the corresponding Life magazine essay.

Sarah Eckhardt, the museum’s associate curator of modern and contemporary art, started acquiring Parks’ photographs for the museum in 2012.

“When I came to the museum, I wanted to build a civil rights collection, since we did not have one,” she says, noting that she bought the museum’s first Gordon Parks photograph, “Department Store, Mobile Alabama” (1956) in 2012.

“I also had the opportunity to buy a photograph that went along with the Stokely Carmichael article [which Parks wrote] in 1967,” she says. “Once I realized that Parks was [taking photographs and] writing for Life, I started looking for photographs that went with the articles.”

While Parks has been hailed as a photographer and filmmaker — and the museum will screen three of his films — his ability as a writer is less recognized. For Eckhardt, having copies of the Life magazine articles is essential because they display the photographs within their original context.

“I’m fascinated by his role as a writer and think it’s something that has been underexamined,” she says. “In his writing, Parks is speaking in such personal terms and with such conviction. Because he was the only African-American photographer for Life, which had a mostly white audience, he played a key role almost as a translator.”

As such, Parks offered his readers a firsthand look at the changing black identity in the 1950s and ’60s by focusing on such topics as family dynamics, juvenile delinquency in Harlem, the black power movement and the Nation of Islam.

“Parks had a tremendous influence on shaping how the American public understood racial issues. Life magazine was where Americans went to get their visual news. It had a huge audience,” Mason notes. “He was aware that because he was the only black photographer at Life, he was under scrutiny. He would ask himself if he was doing justice to his stories as a journalist and then also as an African-American.” S

“Gordon Parks: Back to Fort Scott” opens at the Virginia Museum of Fine Arts on July 23 and runs through Oct. 30. For a complete list of related programs, see vmfa.museum.