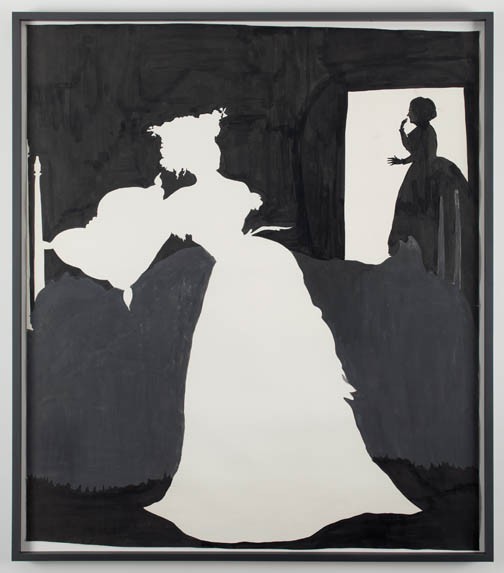 The large 1996 ink-wash drawing, "Untitled," shows what most likely is a house servant about to smother her owner with a pillow. Another woman in the scene, the man's wife, perhaps, stands in the hallway watching with one hand to her mouth. The artist says she imagined the protagonist — a house slave, daughter, or both — as a hero and villain in a "mercy killing" met with surprise and tacit approval.

Walker, who is black and grew up in Atlanta, is known for her disturbing cut-out silhouettes, often inspired by Southern romance tales and slave narratives, which typically address issues of race, gender, sexuality and violence.

The acquired piece comes from a fertile period in Walker's career, shortly before she was awarded a genius grant from John D. and Catherine T. MacArthur Foundation in 1997. Adding her work to the permanent museum collection has been a longstanding goal, says John Ravenal, the curator of modern and contemporary art.

"I don't expect any controversy really. In some of her works there is much more overt sexuality or violence. But this represents her interests," Ravenal says. "It's a particularly bold piece in terms of the contrast between the black, white and gray. And it makes direct reference to her cut paper [works], but it's a framed drawing."

On the whole, Walker's work is a thousand times more complex and disturbing than last year's popular Quentin Tarantino film, "Django Unchained," dealing as it does with horrific imagery and subliminal stories that have gone repressed in American society. Earlier this year in New Jersey, Walker's art was involved in controversy after librarians covered up her drawing depicting slaves having sex. They later uncovered it.

VMFA has roughly $7 million to spend annually from its acquisition endowment fund, making it the sixth richest fine art museum in the country. But that money often comes with restrictions on the kinds of art that may be purchased. While the museum declines to disclose how much it paid for Walker's work, Ravenal says a quarter of the funds came from the museum, with the rest raised from three donors: Pam and Bill Royall Jr., Mary and Don Shockey Jr. and Marion Boulton Stroud.