Large sculpture to be installed in front of museum facing Arthur Ashe Boulevard.

Renowned New York artist Kehinde Wiley signing "Rumors of War," his first public art work recently acquired by VMFA. His representatives wanted to wait until its unveiling in New York to release full images of the work, his largest to date.

Looking for a way to re-contextualize the Civil War monuments that line Monument Avenue? Why not add a 21st-century monument by an internationally known artist a few blocks down the road?

The Virginia Museum of Fine Arts is doing just that.

In December, the VMFA, in partnership with Times Square Arts Coalition and Sean Kelly Gallery of New York, will unveil Kehinde Wiley’s “Rumors of War,” a bronze monument featuring an African-American man dressed in modern street clothes mounted on a horse. “Rumors of War” is based on the J.E.B. Stuart monument, which is 1 to 1 scale, completed by artist Frederick Moynihan and erected at Monument Avenue and Lombardy Street in 1907.

After the work officially debuts in New York's Times Square on Sept. 27, it will be installed in the museum’s front yard facing Arthur Ashe Boulevard and become part of the museum’s permanent collection. While the sculpture is privately funded and costs an undisclosed sum, it is Wiley’s first public art piece, his largest three-dimensional work to date and his response to Confederate monuments in Richmond.

VMFA Director Alex Nyerges explains that when Wiley visited the museum in 2016 for his retrospective exhibition, the artist extended his overnight trip to a week after seeing the Confederate statues so that he could study the statues’ social and political history.

“[He] felt there would be no better home for this sculpture than at VMFA. It is critical that ‘Rumors of War’ is positioned to be in conversation with the monuments that inspired it,” Nyerges explains.

The Sydney and Frances Lewis family curator, Valerie Cassel Oliver, wrote in an email to Style Weekly that Wiley chose the J.E.B. Stuart Monument as his inspiration because he “was struck by not only the stature of the equid, but also the gesture of its rider.”

According to Oliver, Wiley was drawn to Virginia because it has the most monuments or memorials to the Civil War.

“It is within this context that Richmond and Virginia stands out among other states to initiate a conversation around who is memorialized and who is edified,” she says.

A popular retrospective of Wiley's paintings and sculptures titled “A New Republic” was held at the museum three years ago. His new monument, a representational sculpture, is also based on his portraits of African-American men from a series also titled “Rumors of War.” One of the best examples is Wiley’s “Napoleon Leading the Army over the Alps” (2005), with a gold and crimson ground, gilded frame and an African-American man dressed in camo fatigues riding a white stallion à la Jacques Louis David’s “Napoleon Crossing the Alps” (1800-1801). The museum owns one other work by Wiley: the large-scale portrait “Willem van Heythuysen” (2006).

When asked what type of feedback might be provoked by the sculpture, Nyerges acknowledged that it is certain that members of the public will have strong feelings and opinions.

“Our hope is that the sculpture will encourage constructive public engagement and civic discussion about the significance of these monuments in the context of American history and modern day or contemporary culture,” he says. 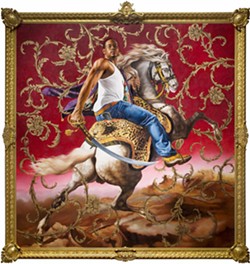 The president of the museum's board of trustees, Monroe Harris, Jr. is more direct.

“The Wiley sculpture is historic for Richmond. It is a strikingly beautiful celebration of African-American imagery that offers a counterpoint to the Confederate statues on Monument Avenue,” he says. “It presents a positive black image never seen before. … To me, it represents an inspiring symbol of African-American pride. It is an image that can’t be undervalued, underestimated or marginalized.”