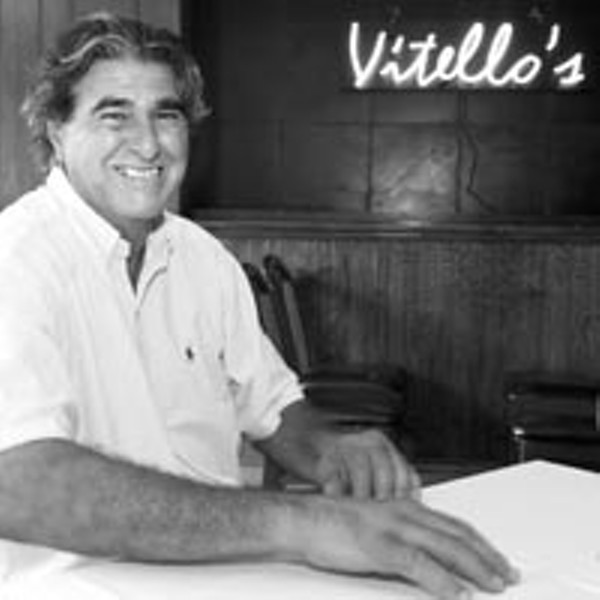 “Wait ’til you see this place at Christmas,” says Chef Howard Awad, who will co-own the restaurant with his friend Richmond developer Chuck Hunnicutt. “The windows will be dressed like downtown used to be.”

Known for its ample dishes and Sinatran charm, the restaurant moved three times in less than a decade. But most customers remember the brushed aluminum and neon of Vitello’s original home at Harrison and West Broad streets.

It’s the image Awad says he’s dusted off and improved. The kitchen is larger than one might expect and is outfitted with a combination of the latest high-tech appliances and some leftover dinosaurs. Awad says he’ll make the most of both.

The décor is stylish: burgundy mirrors, blue neon and high-gloss resin. Servers will wear tuxedos and prepare salads table side. A linen-topped table for four — Table No.1 — will be set in the belly of the kitchen for friends, family and select reservations.

Vitello’s menu will include between 80 and 90 wines, and 30 entrées ranging from rack of lamb to lobster tail. Let’s not forget the steaks.

“I was famous for them,” says Awad, whose first forays into the business included a place called the Bearded Brothers and the college bar Hababa’s.

Resurrecting Vitello’s at the John Marhall is smart business, even part of a trend, says Richmond’s Director of Economic Development Director John Woodward. He points to recent, nearby openings of Manhattan’s, Penny Lane Pub and the other John Marshall restaurant, the Martini and Bubble Bar. “There was nothing here before at night. Now these places are bringing traffic to the central part of downtown,” Woodward says.

Meantime, nostalgia mounts for Awad. “I’m tired of cleaning and ready to cook,” he says, adding: “Mostly I miss my old friends and customers.” — Brandon Walters