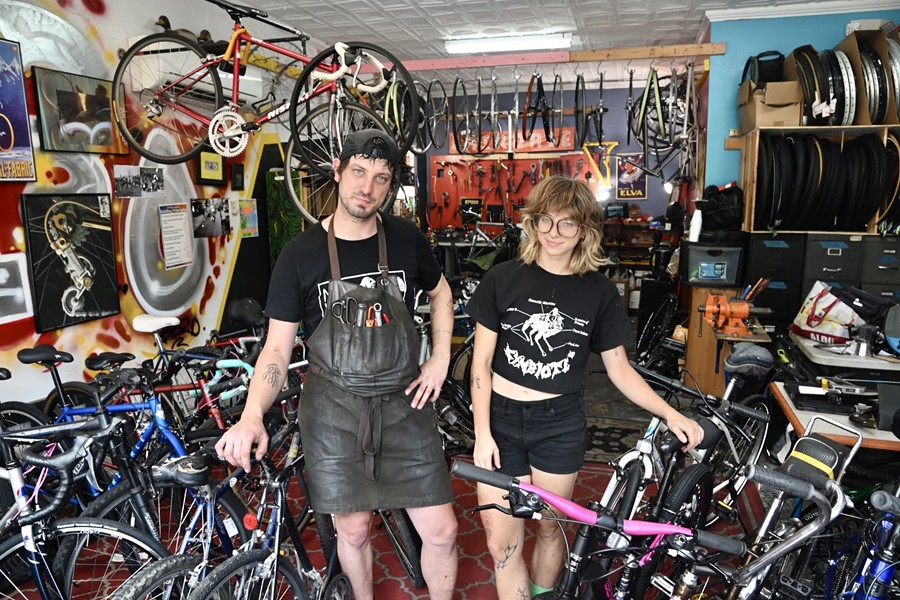 Many bike mechanics earn a reputation as macho elitists with no time for amateur riders - but not Robbie Wood. At his Union Hill shop, Wheel Simple Bicycle Repair, Wood goes out of his way to serve his customers and to use his talents to foster community in Richmond’s East End. After almost three years at his Mosby Street location, Wood is expanding his business without giving up on his heart for helping those who need a hand.

Ever since he was a kid Wood has always been on bikes, but the Virginia native never dreamed of opening his own shop. Hoping to become a poet and teacher, he left his hometown to get a dual degree in literature and education. After two years of schooling, Wood dropped out and returned to Richmond to help care for a brother with an intellectual disability and a grandmother increasingly ailing from diabetes and cancer.

“As soon as I decided I was going to walk away from education, I fell back on bikes to make ends meet,” says Wood. “I knew I wasn't going to pivot again for a long time, so I tried to spend as much time as possible working on bikes, compressing all the experience I could into 4-5 years. I didn’t care that I was getting lousy pay because my goal was to have my own small business.”

Wrenching at two local bike shops and volunteering with the Northside-based Rag & Bones Bicycle Cooperative 15 hours a week left Wood with little free time and even less money, though he wouldn’t trade that time in his life for anything. Building custom wheels in his basement paid the bills but also required a business license.

“I chose Wheel Simple as the name because I just wanted to have a tiny wheel building business and work part-time in a shop,” Wood explains. “After building in my basement for one year, I realized that I needed to consolidate my two jobs and volunteer work. I love wheel building, but I would rather serve a community than do some niche lucrative thing that only a few people know about.” 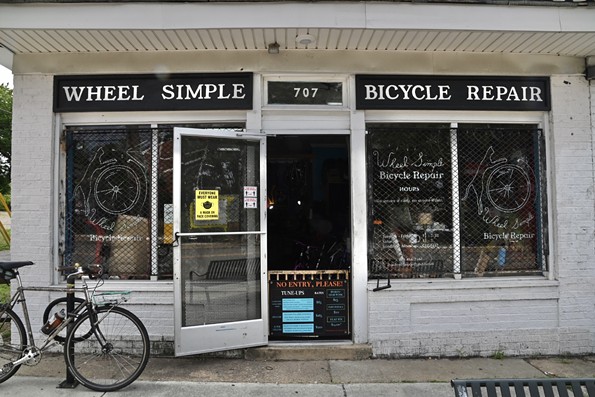 Despite being just a half mile away from a bike shop he had previously worked at, the brick-and-mortar he found on Mosby Street seemed to be in “a whole other world,” according to Wood. “Union Hill is separated by class and race, and people on this side of Jefferson Avenue never knew the shop I worked at over there existed. I like being in this area because it’s near the Capital Trail but it’s still an underserved part of the city.”

Wheel Simple doesn’t do trikes or e-bikes, but they do repair a whole lot of bicycles with services ranging from rim repair and wheel building to fixing steel frame failures with bronze brazing. Wood just bought his first batch of brand new bikes to sell, a bit of an experiment in expanding his business beyond just repairs. He and his one employee are also well known for working on older stuff: “Issues that other shops couldn’t be bothered with don’t bother me,” says Wood.

“This is a way to build community in the East End. I have millionaire customers and homeless customers, but all their bikes are side by side in my shop rubbing handlebars.” -- Robbie Wood of Wheel Simple Bicycle Repair tweet this

For customers who can’t afford their repairs, Wheel Simple has a community tune-up fund. So far in 2022 the fund has raised over $1,500 to cover low-income customers’ costs. Wood hopes to reach $3,000 by the end of the year. Sometimes customers pay half of their bill, sometimes they can’t afford to pay anything, but frequently they return weeks or months later to donate to the tune-up fund and pay it forward.

“I have a lot of people who depend on bicycles for transportation, but they're riding really inadequate, inferior equipment,” Wood says. “This is a way to build community in the East End. I have millionaire customers and homeless customers, but all their bikes are side by side in my shop rubbing handlebars.”

To give customers and neighbors alike an option to do their own repairs, Wheel Simple recently raised enough money to buy two bike tool stands that Wood plans on installing two blocks south of his shop in Jefferson Park. He already has the stands ready to go and is just waiting on city officials to return his calls and authorize their installation.

With all of the goals he set out for his first three-year lease in his Union Hill location complete, Wood is already planning what else he could do to give back over the coming three years, including bike swaps and free bike giveaways.

The life of a bike mechanic—even one who owns his own shop—is not an especially lucrative one. That’s partly why Wood has such a heart for his customers struggling under the pressure of poverty.

“A lot of people in Richmond still think of choosing to ride a bike for transportation as an irresponsible or privileged decision,” he says. “In reality, I got rid of my car because it was the only thing that worked for me financially. I bike all over town because I couldn’t afford my own motor vehicles without giving up everything else that I do.”

Whether you see Wood at Wheel Simple or just pedaling his way around the city, his commitment to his customers and the broader community is palpable: “I'm in this for the long haul,” he explains. “I love learning new things every day and earning my customers’ trust.”