Virginia Rep’s “Atlantis” offers a fable with some memorable songs 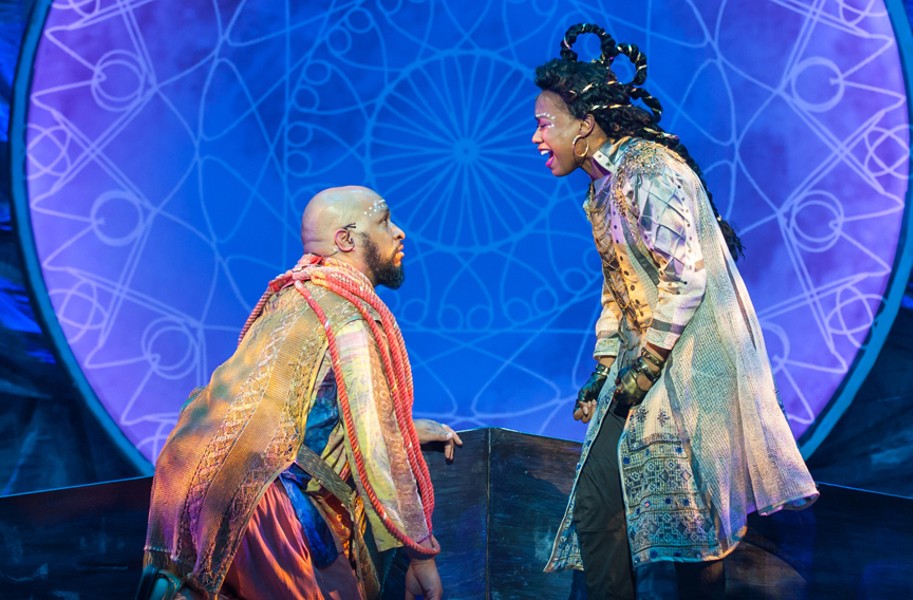 The lost city of Atlantis has inspired countless imaginations throughout history. The story has been told and retold and adventurers have sailed the sea searching for the ruins of a place we all collectively remember as an ideal society, a perfect utopia.

In fact, the story of Atlantis is an allegory invented by Plato as a way to discuss his philosophies. The fictional lost island nation is meant to represent a dystopia, a land at odds with the tenets of the ideal state, ultimately leading to its destruction and a watery fate at the hands of the Greek gods. Atlantis is a story with a moral at the end.

Matthew Lee Robinson's new musical, "Atlantis," currently premiering at Virginia Repertory Theatre, stays true to the origin of the myth. "Atlantis: a New Musical" is a morality fable about the risks and sacrifices required to maintain the illusion of a perfect, safe, peacefully isolated society.

Maya, a young Atlantean woman, knows in her heart that there's something beyond the seam where the ocean touches the sky. When a stranger washes ashore after a storm, Maya searches for answers. Meanwhile, the islanders prepare for their ascension ceremony in which they will bid farewell to their of-age first-born children, who they believe will go on to join their deity, a vague fate. Maya begins to question this and other Atlantean traditions as she learns more and more about this visitor, and about what his presence could mean for the Atlantis she has always known and loved.

One thing I enjoyed about this show is the attention to what might constitute a perfect society. The Atlantis of this play does, indeed, appear to be a utopia at first glance. It seems like an inclusive environment, a place where gender fluidity, mixed-race relationships, blended families and all kinds of sexual identities are honored and celebrated. However, the play seems to say that this kind of inclusion exists only as the result of governmental secrecy and deception.

Director Kristin Hanggi keeps the story moving at a quick pace, emphasizing the funny moments as well as the sweet, touching ones. Kikau Alvaro's choreography is excellent, light and entertaining.

Robinson' songs are big, splashy Broadway show tunes featuring powerful vocal arrangements. Anthony Smith's musical direction is impeccable and this cast boasts some amazing vocal performances. Some of my favorites include "I Will Run," and "Are You There?" both performed by Antoinette Comer as Maya, and "Let's Start a War," performed by Julian R. Decker as Kaden, Maya's friend and a first-born about to ascend. My favorite, though, is "Like It Is," Lucy Caudle's big number as Kaden's precocious little sister Alexa. I found myself humming her song the day after I saw the show.

Jason Sherwood's scenic design is attractive and functional, featuring lattices woven with greenery and limned in neon light, giving the show an art deco vibe. B.J. Wilkinson's lighting design is dynamic and dramatic, playing well against the set. Amy Clark's costumes hint at a seafaring culture, using netting and shells and other oceanic elements in her design.

Overall, "Atlantis" is a pretty good musical. But the story, driven by its message more than its characters, can feel a bit shallow. Characters seem to exist to serve the plot, lacking the depth and internal motivation every story needs to move beyond its origins as a cautionary tale. Like the city of Atlantis itself, this musical has all of the exterior elements of a perfect Broadway hit, but it lacks the emotional heart needed to buoy the big, pivotal moments in these characters' stories. "Atlantis: a New Musical" is still just a fable, and that, ultimately, is its downfall.