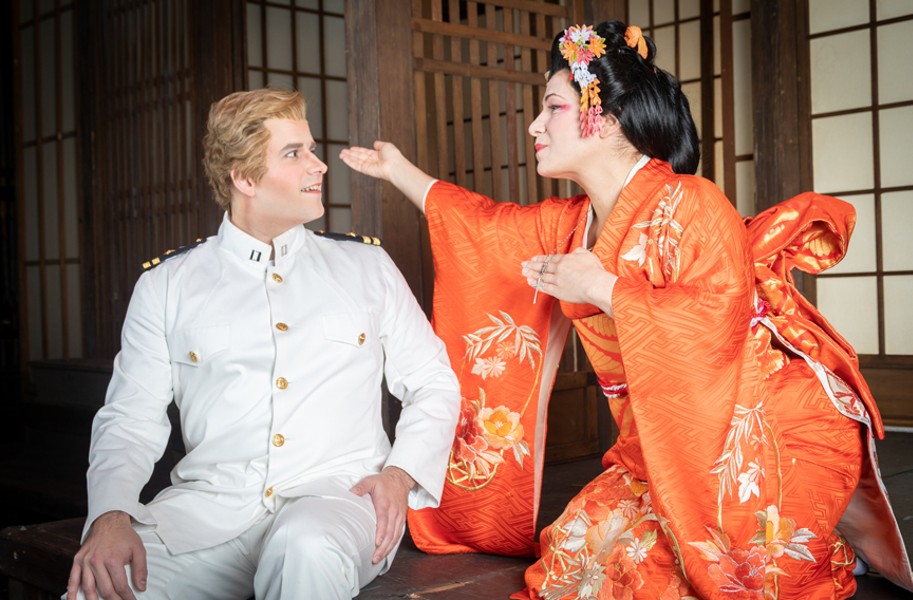 When Giacomo Puccini's "Madama Butterfly" first premiered at Milan's Teatro alla Scala opera house in 1904 it was nothing short of a disaster.

One observer said that the opera was met with "grunts, growls, gibes, bellows, sneers," creating such a racket that other audience members couldn't hear the music above the din. Paid hecklers made it known that the lead soprano had borne the conductor's child. Puccini himself called the evening "a real lynching" and vowed to never play La Scala again.

Over the next three years, Puccini would revise "Madama Butterfly," and today it's one of the most frequently performed operas in the world. This weekend, Virginia Opera's production of this dramatic classic comes to Richmond.

The hauntingly beautiful opera tells the tale of Cio-Cio-San, a 15-year-old geisha in turn-of-the-century Japan. Cio-Cio-San is to wed Lieutenant Pinkerton, an American naval officer, and the two have very different ideas of what they want from their marriage. While Cio-Cio-San has converted to Christianity and dreams of being a bride in America, Pinkerton is only marrying her for convenience until he finds an American wife. After they wed, Pinkerton leaves and Cio-Cio-San gives birth to their child.

"We're dealing with a clash of cultures," explains soprano Danielle Pastin, who plays Cio-Cio-San in the production. "It's so operatic. It's everything everybody loves about opera."

Calling it "one of the war horses of the opera repertoire," director Richard Gammon says "Madama Butterfly" carries universal themes of the sacrifice of mothers and feeling like the other. At a time when some have questioned whether "Madama Butterfly" reinforces negative orientalism stereotypes, Gammon says he's glad to bring this opera to the stage, and of the color-conscious casting choices that have been made in this production.

"It's interesting as a person of color to be able to direct this piece," Gammon says. "It's me working through a lot of feeling like the other and identifying the moments when it happens to Butterfly, and also to Pinkerton."

Adam Turner, the show's conductor and Virginia Opera's artistic director, says "Madama Butterfly" is a gem of the operatic canon.

"[It's] one of the top five operas of all time. It's a tragic story, it's full of gorgeous lyricism and beautiful writing that you expect from Puccini," he says. "There's just something about the orchestral texture, the way the orchestra colors those intimate emotional moments."

One of his favorite moments is Cio-Cio-San's entrance.

"Talk about one of the greatest entrances in all opera," Turner says. "Suddenly everything stops and you hear these glorious high notes and really otherworldly colors coming out of the orchestra and the offstage singing of the geishas."

While the score never fully embraces Japanese music, Puccini did study Japanese folk music and manners in an effort to bring some realism to the opera.

"There's a little bit of color of Japanese instruments and some Japanese folk tunes that Puccini was researching that he inserted into his own piece," Turner says. "It's very evocative of that world of Japanese culture and music from an Italian's perspective in 1904. Audiences love this score, just for its emotional pull on the heartstrings. It's really such beautiful, gorgeous music."

Much of the opera's heavy lifting will fall on the shoulders of Pastin, who made her Met debut in 2011. In what's already one of opera's most demanding roles, Turner says Pastin stays onstage during part of the show when most sopranos leave the stage to rest and drink some water.

"She's just a stunning performer," he says. "This is one of her signature roles."

For Pastin, the most important part of tackling the role is the pacing, both physically and emotionally.

"It is one of the biggest roles in a lyric soprano's repertory," Pastin says. "It is a very big sing, and Puccini is hard to sing for a lot of singers."

In bringing a once hated but now beloved opera to the stage, Turner says "Madama Butterfly" is rich enough for eternal examination.

"From this huge catastrophe came one of the opera world's hits," he says. "Here we are 110 years later or more and still hearing it, seeing and discovering new things about it."