Virginia Is Familiar Training Grounds For Police and Security Agencies 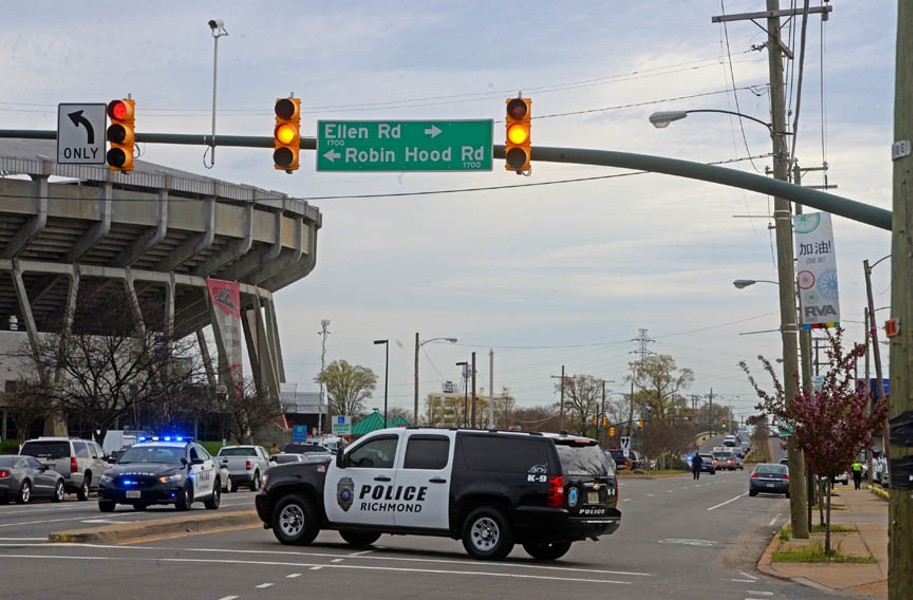 Police swarm the Boulevard outside the Greyhound bus terminal on Thursday, March 31. Shootings resulted in the deaths of Virginia State Police trooper Chad Dermyer and his assailant, James Brown III.

Such exercises aren’t unusual. For years, the Richmond area has served as a training ground for police, military, the FBI, the CIA and other security agencies. One reason is that it’s close to a number of training facilities stretching from the Washington area to North Carolina.

Dermyer, 37, was one of 16 state police officers participating in criminal interdiction training at the bus station.

“It’s like a traffic stop,” state police spokeswoman Corinne Geller says. “The officer practiced engaging with individuals and talking with them to detect criminal behavior.”

Dermyer happened to be the only participating officer wearing a uniform. He approached James Brown III, a man with a lengthy criminal record who was traveling from North Carolina to Chicago, near where he lived. Police say that that Brown had a pistol that didn’t belong to him and 143 rounds of ammunition in his baggage.

Brown shot Dermyer several times in the chest. He in turn was shot by two other troopers. Both men died at VCU Medical Center. Two women also were hit, although their wounds weren’t life threatening.

Dermyer was a member of a state police counterterrorism and criminal interdiction special unit. Its members regularly go through periodic classroom and field exercises, Geller says, especially when members leave and new ones take their place.

Another group that has used Richmond for field training is the CIA, which operates its basic training facility at Camp Peary, also known as the Farm, outside Williamsburg.

In his controversial 1975 book, “Inside the Company: a CIA Diary,” former CIA officer Philip Agee describes how CIA trainers led students on cat and mouse surveillance drills in downtown Richmond.

The FBI, which has its basic training center in Quantico, also has used the Richmond area for training. In 2008, the FBI worked with a Marine Corps unit from Camp Lejeune, North Carolina, to practice urban warfare. Some 2,200 Marines, many in helicopters, drilled in a wide area stretching from Henrico County to Burkeville and Buena Vista during the 15-day event.

Fort Pickett, a Virginia National Guard base about 40 miles south of Richmond, long has been a training ground for all branches of the military, the FBI, the Secret Service, the CIA and units from Canada. It also will house a $461 million training facility for U.S. State Department security officials. One goal is to avoid situations such as the attacks in 2012 on U.S. compounds in Benghazi, Libya, which resulted in the deaths of U.S. Ambassador J. Christopher Stevens, an information officer and two CIA contractors.

Fort Pickett also may or may not have figured in the 2011 killing of terrorist Osama Bin Laden in Pakistan by Navy SEAL Team Six based in Virginia Beach.

In his 2012 book, “SEAL Team Geronimo,” former SEAL Chuck Pharrer calls this base Tall Pines and describes it as “a sprawling, secret Army training facility tucked in Camp Pickett, which was itself put off into a far corner of a national forest in an eastern state.”

He writes: “Lots of spooky things happened in Pickett, and the SEAL teams have trained in there for years. Some nights, strange, silent lights are seen over the forest and UFO calls are made to the sheriff. Camp Pickett is SEAL Six’s playground.”

He says that a replica of Bin Laden’s compound was built to train the SEALs, although other accounts say the training facility was in North Carolina.

Some of the regional training activities are publicly announced, especially if they involve loud noises or low-flying aircraft. The Marine Corps put out such a release for the 2008 exercises.

The state police training last week was unannounced, Geller says, because it involved mostly plainclothes officers approaching bus passengers and others at random to ask questions.

Officer Dermyer wasn’t wearing a bulletproof vest over his navy blue state police utility uniform. At a news conference, Col. W. Steven Flaherty, state police superintendent, said that “we encourage our people to wear vests.” But he added that he didn’t know whether that would have saved his life: “We’re talking about a .40-caliber weapon inches from his chest.”

A funeral for Dermyer was scheduled for April 5 at 11 a.m. at Liberty Baptist Church in Hampton. The former Marine leaves behind a wife and two children. S