Virginia Highway Signs Are Getting a New Old Font

Which do you prefer -- Highway Gothic or Clearview? 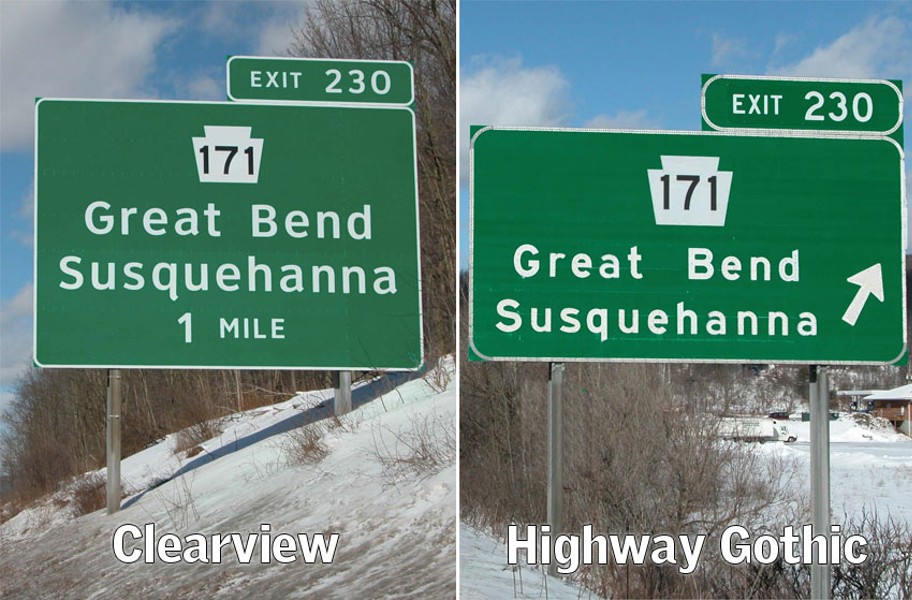 The Clearview typeface, left, was supposed to be better. But the Federal Highway Administration is giving the green light to go back to Highway Gothic, right.

Highway signs across the Richmond area are about to get a new look — or perhaps more accurately, an old look — after a failed experiment.

In 2004, the Federal Highway Administration temporarily adopted the Clearview typeface in an effort to improve sign legibility for poorly sighted and older drivers. Virginia was among dozens of states allowed to make the change.

Now the agency is ordering states to slowly return to the previous style, Highway Gothic, after studies showing that Clearview may not be as effective.

Then again, drivers approaching a Clearview sign at 45 mph benefit from an additional 1.2 seconds of visibility, the agency notes.

Virginia doesn’t have to rush out to remove the signs. The agency mandates that only Clearview signs scheduled for retirement because of wear and tear must be replaced with Highway Gothic.

One of the Clearview’s developers, Donald Meeker, head of the New York firm Meeker & Associates, says that it shows as much as a 30-percent improvement in visibility. He says that’s a marked improvement over Highway Gothic, which was developed in the 1940s.

“It’s like doing it in vacuum tubes instead of microchips,” he says of the shift back.

Meeker says Clearview gives greater visibility to ascending letters, which typically are harder to view, than what federal standards mandate.

But a highway administration spokesman says that Clearview diminishes visibility in negative-contrast situations — when black letters are used on lighter backgrounds, as reported in the Atlantic magazine. This occurs in speed limit and warning signs.

Certain letters in Clearview also may appear clearer because they have more negative space within the letter, says Mark Jeffries, who teaches graphics for journalism at Virginia Commonwealth University.

But in case you take notice whizzing by, Clearview may be more attractive.

It’s “more pleasing to the eye,” Jeffries says. Highway Gothic “is clunky and too compact.”