Stephen M. Katz An 8-foot by 8-foot Confederate Battle flag flies along the Chesapeake Expressway on land leased from Stephen Etzell's wife and brother-in-law by The Virginia Flaggers.

Travelers heading to the Outer Banks this summer will see an 8-foot-by-8-foot Confederate battle flag, flying atop a 35-foot pole near the Chesapeake Expressway toll plaza.

It’s the 26th flag raised in the commonwealth – the first in southeastern Virginia – by a 6-year-old Richmond-based group known as the Virginia Flaggers, according to its blog.

“They took great glee in the fact that tourists would have to be paying $8 to see it in the summertime,” said Stephen Etzell of Chesapeake, alluding to the $8 one-way tolls at that time of year at expressway toll booths, which sit about a half-mile southeast of his backyard.

That’s where the flag, which sits a little more than 10 yards off the expressway’s southbound lanes, appears to be located, though it’s technically on a snippet of land owned by his wife, Sharon, and brother-in-law, D.B. Walston Jr.

“I initiated it,” said Walston, 77, of North Chesterfield, who along with his sister spent much of his childhood on the property.

His great-grandfather, William Perkins Walston, fought with the “Home Guard,” a Confederate guerrilla unit based in the Elizabeth City, N.C., area, he said. That connection allowed him to join the Sons of Confederate Veterans.

Last fall, he approached the Richmond group about the possibility of putting up a flag on his land to honor the memory of the Jackson Greys, a Confederate unit made of men in what was then Norfolk County, now Chesapeake.

The unit – Company A, 61st Virginia Volunteer Regiment – fought at Gettysburg, the Wilderness, Spotsylvania Court House, Cold Harbor and the Crater at Petersburg, among other battles. It surrendered at Appomattox Court House.

A monument to the unit, unveiled in 1905, sits about two miles to the northwest, in a clearing on St. Brides Road where the group formed shortly after the Civil War began.

If the new flag flew there, few would see it, Walston said.

His proposed site alongside the expressway would take care of that and fit the Virginia Flaggers’ concept, he added: “They like to put them on major thoroughfares where they can be seen.”

He wound up leasing the property on which the group raised the flag, charging a minimal amount – “a dollar a year or something like that.” 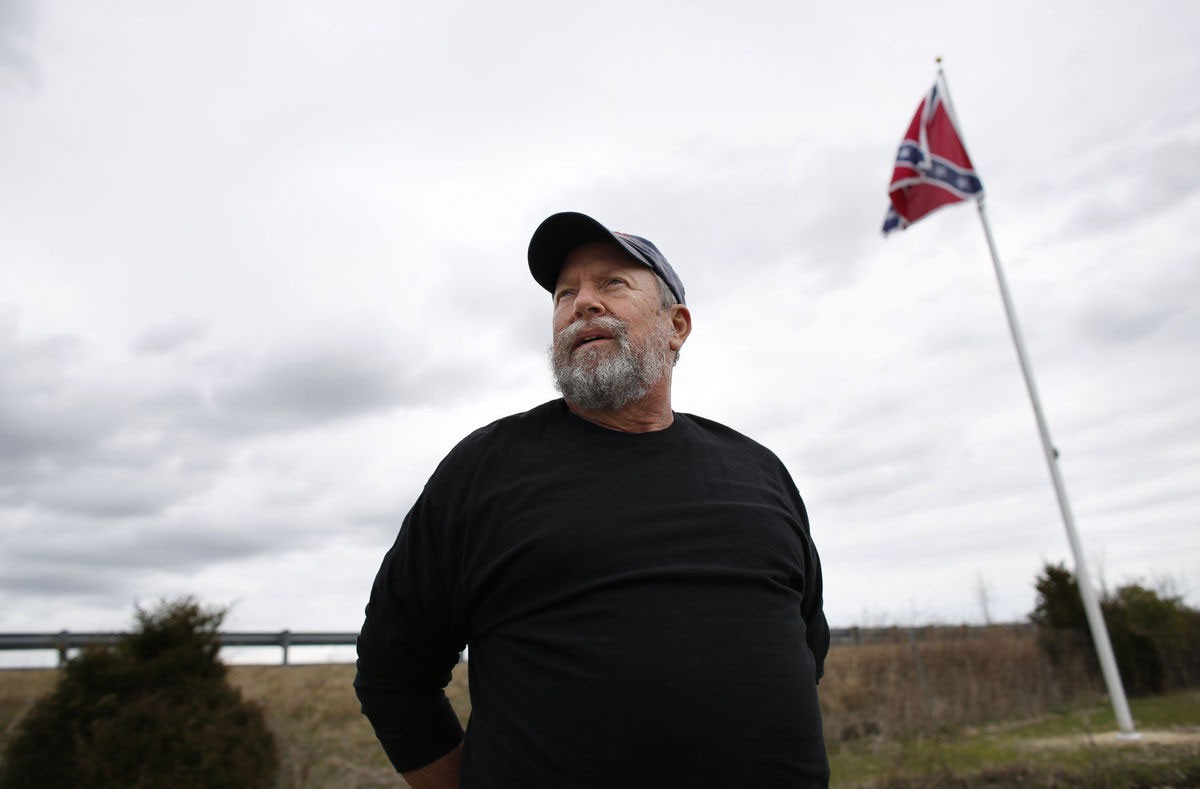 The base of the flagpole is encased in concrete, about 4 feet in the ground, and a city permit was pulled for the project, Etzell said.

Last July, the Flaggers raised one of the largest Confederate flags in the country – 30 feet by 50 feet – along the U.S. 29 bypass in Danville. After some speeches, the flag was hoisted with the help of a hydraulic crane, the Danville Register & Bee reported.

The group seeks out sites on private property on which to erect the flag as a response against efforts by governments in some localities to dissociate themselves from it.

“This is not political,” said Barry Isenhour of Midlothian, a Virginia Flaggers spokesman. “This is simply to honor the Confederate soldier.”

Asked to address concerns of those who find the flag offensive, a symbol of institutionalized racism, Isenhour said he would tell them: “Read and study real Virginia history and you won’t be offended.”

He said he might add, “I’m sorry you feel that way, but it’s on private property.”

“Our weapon is the Confederate Battle Flag. Our enemies are those who worship ignorance, historical revisionism and Political Correctness.”

City Council member Ella Ward said she hopes the group eventually will choose to take the flag down.

“It’s not anything that I really support. They have the freedom to do that, but to me it’s offensive. I don’t think it’s the right thing to do or sends the right message,” she said.

The flag on Walston’s property in southern Chesapeake was dedicated Jan. 28, a ceremony attended by about 100 people, according to the Flaggers’ blog.

“Passers-by began blowing their horns in support almost as soon as the flag was unfurled,” it added.

Asked if the group had plans for more flags, Isenhour said that information is closely guarded.

“We try to keep it close to the vest until we’ve actually unveiled it,” he said. “We don’t announce it until we’re sure everybody’s on board.”

A month after the flag went up, Etzell said, the reaction has been supportive.

“We’ve gotten a lot of honkings, a lot of positive comments,” he said, adding that some drivers on the expressway have pulled over for a closer look.

“We’ve had people actually stop and take pictures of the flag. … I haven’t seen any one-finger salutes or anything like that.”